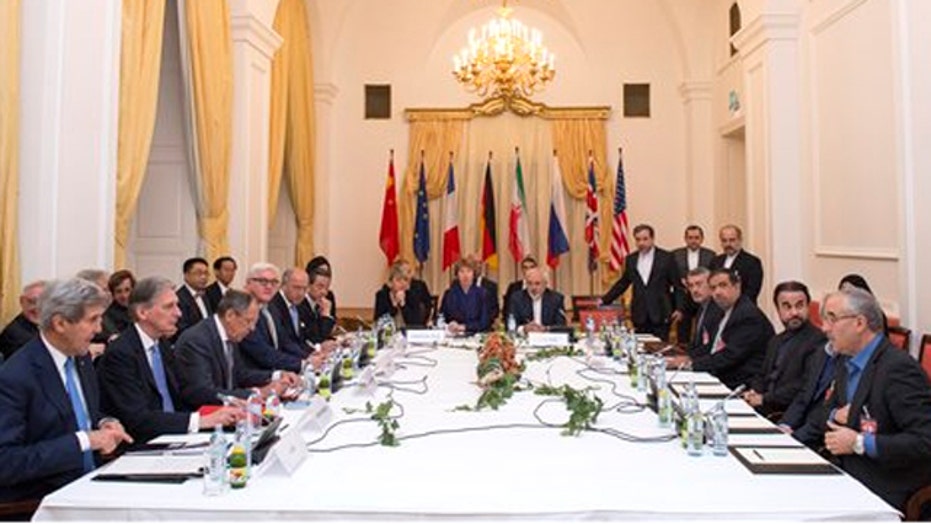 Reaction from Stuart Holliday, former US ambassador for special political affairs at the United Nations

VIENNA – A yearlong effort to seal a nuclear deal with Iran fizzled Monday, leaving the U.S. and its allies little choice but to declare a seven-month extension in hopes that a new deadline will be enough to achieve what a decade of negotiations have failed to do — limit Tehran's ability to make a nuclear weapon.

U.S. Secretary of State John Kerry and other Western foreign ministers converging on Vienna in a last-ditch diplomatic push talked up the add-on time as the best way forward. "We would be fools to walk away," Kerry declared.

But a week of tough maneuvering appeared to have achieved little more than agreement to keep on talking. Negotiators will now strive to nail down by March 1 what Iran and the six world powers it is negotiating with must do, and by when. A final agreement is meant to follow four months later.

Pushback from critics in Congress was not long in coming, reflecting the concern of powerful Republicans that Iran is merely trying to buy time — criticism that is likely to increase if negotiations yield little progress in capping Iranian programs that could make nuclear weapons.

Members of the new Republican-controlled Congress to be sworn in early next year have already threatened to impose additional sanctions on Iran and may well have enough votes to overturn an expected veto by President Barack Obama.

"The one thing the Iranians didn't have was time, and now they have 219 days," lamented Sen. Mark Kirk, an Illinois Republican whose work with Democratic Sen. Bob Menendez of New Jersey on oil sanctions helped cripple Iran's economy and drive it to the negotiating table.

Kirk pledged to come forward with a new bipartisan sanctions package after the Republican takeover of the Senate. Menendez suggested similar action, saying he'd work "to ensure that Iran comprehends that we will not ever permit it to become a threshold nuclear state."

The U.S. administration strongly opposes additional sanctions because it fears it will push Tehran away from the table.

Kerry called for patience, saying he hoped congressional skeptics would "come to see the wisdom" of giving talks an extra "few months to be able to proceed without sending messages that might be misinterpreted."

In Tehran, hard-liners fearful that their country will give away more than it gets under any final deal may increase pressure on Supreme Leader Ayatollah Ali Khamenei to break off talks. Still, the latest extension appears to have the approval of Khamenei, the ultimate arbiter in his country.

"Many gaps have been eliminated," Rouhani said in a statement, though he added the sides were "still some distance" from a deal.

U.S.-Iran relations have warmed since Rouhani took office last year and the thaw has extended to the nuclear negotiations.

Still, Rouhani has struggled to sell the idea of negotiating with arch-foe America to hard-liners at home and he pledged "ultimate victory" for the Islamic Republic in securing a favorable agreement.

Monday's decision already appeared to benefit Iran. Its nuclear program is left frozen but intact, without any of the cuts sought by the U.S. And while the negotiations continue, so will monthly dole-outs of $700 million in frozen funds that began under the temporary nuclear deal agreed on late last year that led to the present talks.

British Foreign Secretary Philip Hammond told reporters the sides were giving themselves until March to agree on a text "that sets out in layman's language what we have agreed to do." Experts then will have four months to "translate that into precise definitions of what will happen on the ground," he said.

A joint statement read by Iranian Foreign Minister Mohammad Javad Zarif and EU official Catherine Ashton, speaking for the six powers negotiating with Iran, said the sides "remain convinced that ... a comprehensive solution can be reached."

Even the new deadline was not immediately clear, with negotiators saying it was July 1, and Hammond fixing it at June 30.

Among the issues the two sides are haggling over are how many — and what kind — of centrifuges Iran should be allowed to have. The machines can enrich uranium from low reactor-fuel level up to grades used to build the core of a nuclear weapon. Washington wants deeper and more lasting cuts in the program than Tehran is willing to give.

The U.S. initially wanted Iran to slash its centrifuges to less than 2,000 from the nearly 10,000 it now runs, but says it can accept 4,500 if Tehran agrees to other conditions meant to slow its ability to turn toward making weapons-grade uranium. Iran, which came to the talks in February insisting it be allowed to keep its present program, says it can reduce to 8,000.

Washington and Tehran also differ on how long constraints should remain on Tehran's nuclear program. Washington has moved from wanting restrictions over at least 20 years to accepting between 10 and 15 years, but the Iranians insist on no more than 10 years.

Past talks have often ended on an acrimonious note, with each side blaming the other for lack of a deal. But Kerry focused on praise, in an apparent attempt to maintain a relatively cordial atmosphere at the negotiating table.

Kerry, who arrived Thursday and met repeatedly with Zarif, said his Iranian counterpart "worked diligently and approached these negotiations in good faith."

"We have made real and substantial progress and we have seen new ideas surface," Kerry told reporters. "Today we are closer to a deal that will make the whole world, especially our allies in Israel and the Gulf, safer."

Hammond and other foreign ministers of the six powers also sought to put a good face on what was achieved. Hammond spoke of "significant progress," while German Foreign Minister Frank-Walter Steinmeier said only differences about "technical details" remained.

"All the people involved here feel that there really is a chance to find a way to reach each other and we are going to take that chance," Steinmeier said.

But the length of the extension suggests that both sides felt plenty of time was needed to overcome disputes.

Tehran residents hoping for relief from sanctions and a reduction in tensions expressed frustration at Monday's decision, despite their president's positive spin.

"The West is making a big mistake," said high school teacher Abbas Hoseini. "Instead of working with Iran and a close engagement, they are pushing Iran toward Russia and China."