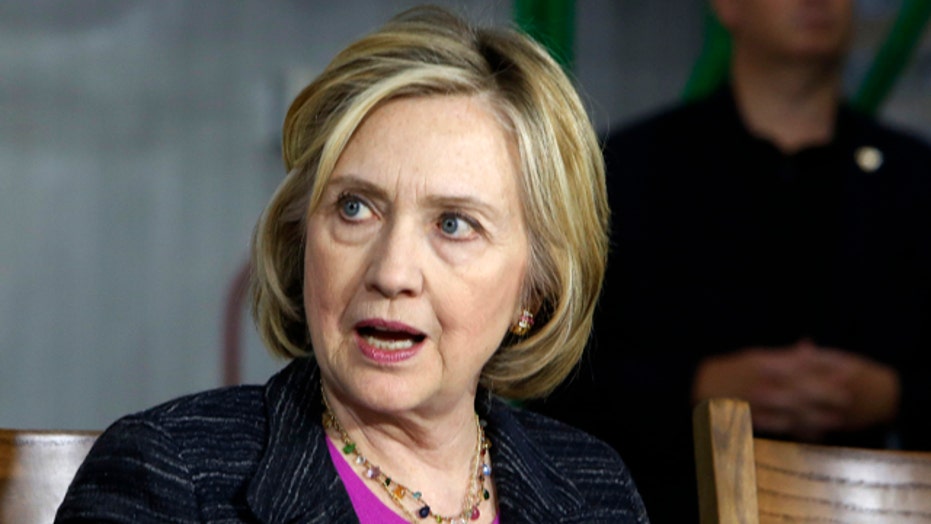 WASHINGTON – Internal State Department emails in the aftermath of the Benghazi terror attack show then-Secretary of State Hillary Clinton received detailed information indicating the strike was planned by well-trained fighters, yet her office continued to push the narrative days later that it began "spontaneously."

The messages were among 296 emails released Friday by the State Department, in the first batch of emails to be made public from Clinton's tenure as secretary of state. Totaling 896 pages, the emails show a series of Libya dispatches Clinton received from a confidant, as well as the barrage of messages among her and her aides after Sept. 11, 2012.

Those messages depict the rapidly changing understanding of what happened at the U.S. compound that night, and the administration's internal struggle to settle on a public narrative.

As previously reported, confidant Sidney Blumenthal fired off two memos in the two days after the attack. But the full email release shows he gave a highly detailed picture of what "sources" said had happened that night. Initially, on Sept. 12, he sent Clinton an email linking the attacks to anger over an anti-Islam Internet video which had triggered protests across the region.

But the next day, he sent Clinton an email with very different information, saying officials believed the attackers were with the Islamist militia Ansar al-Sharia. He wrote that officials thought the attackers "prepared" for the strike and "took advantage of the cover" from demonstrations over the video. Further, he cited sources saying roughly 21 fighters left from a base in East Benghazi and "infiltrated the crowd" and began opening fire on the U.S. consulate. Libyan officers, he wrote, said the attacks were "planned" for roughly one month.

Fighters with the brigade were described as "well-trained, hardened killers, many of whom have spent time in Afghanistan and Yemen."

Despite the guidance, then-U.N. Ambassador Susan Rice went on several television programs Sept. 16 to claim the attacks were "spontaneous," and not premeditated, and link them to protests over the anti-Islam video.

The department appeared to back her. In an email sent that day from top department official Jake Sullivan to Clinton, he said Rice had made clear "our view" that "this started spontaneously and then evolved."

Yet on Sept. 24, after a fierce political debate had broken out over the nature of the attacks, the same official sent Clinton a compilation of her own statements on Benghazi, assuring her "you never said spontaneous or characterized the motives" and only said "some sought to justify" the attack by citing the video.

The exchanges are sure to fuel the long-running debate over why some in the administration initially pushed the video explanation and played down the idea that the attack was planned. Fox News reported earlier this week that a Defense Intelligence Agency report from Sept. 12 also said there were indicators the attack was planned and meant as retaliation for a drone strike that killed an Al Qaeda strategist.

Fox News also reported in October 2012 that a set of internal emails declared Ansar al-Sharia claimed responsibility for the attack in Benghazi virtually as the raid played out. The emails were sent by the State Department to a variety of sources.

The emails released Friday are just a fraction of what the department has in its custody -- after it was revealed that Clinton used a private email address and server, and turned over her files to the department.

Spokeswoman Marie Harf said the emails were given to a House committee investigating the 2012 attack on the U.S. diplomatic post in Benghazi, Libya.

She said redactions were made according to Freedom of Information Act standards. The documents cover emails between 2011 and 2012 related to the Benghazi facility and its security, and to the broader issue of a U.S. diplomatic presence in Libya.

Harf said the emails "do not change the essential facts or our understanding " about the attacks that killed four Americans on Sept. 11, 2012. The State Department is still reviewing 55,000 further pages of emails from Clinton's private email account. They'll be published on a rolling basis.

Another email in the batch showed Clinton received information on her private email server that has now been classified about the deadly attack on U.S. diplomatic facilities in Benghazi. The email in question, forwarded to Clinton by Sullivan, her deputy chief of chief, relates to reports of arrests in Libya of possible suspects in the attack.

No other redactions were made to the collection of Benghazi-related emails for classification reasons, the officials said.

It is at the end of a chain of communication that originated with Bill Roebuck, the then-director of the Office of Maghreb Affairs, that pointed out that Libyan police had arrested several people who might have connections to the attack. The redacted portion appears to relate to who provided the information about the alleged suspects to the Libyans. A total of five lines related to the source of the information were affected, but only the 23 words were deleted because the FBI deemed them to be classified.

"It is also important to remember these email messages are just one piece of information that cannot be completely evaluated or fully understood without the total record. The Committee is working to collect and evaluate all of the relevant and material information necessary to evaluate the full range of issues in context," he said. "We will not reach any investigative conclusions until our work is complete, but these emails continue to reinforce the fact that unresolved questions and issues remain as it relates to Benghazi."

He reiterated that the committee wants Clinton to turn over her personal server and "the full body of emails over to a neutral, detached, independent third party for review."