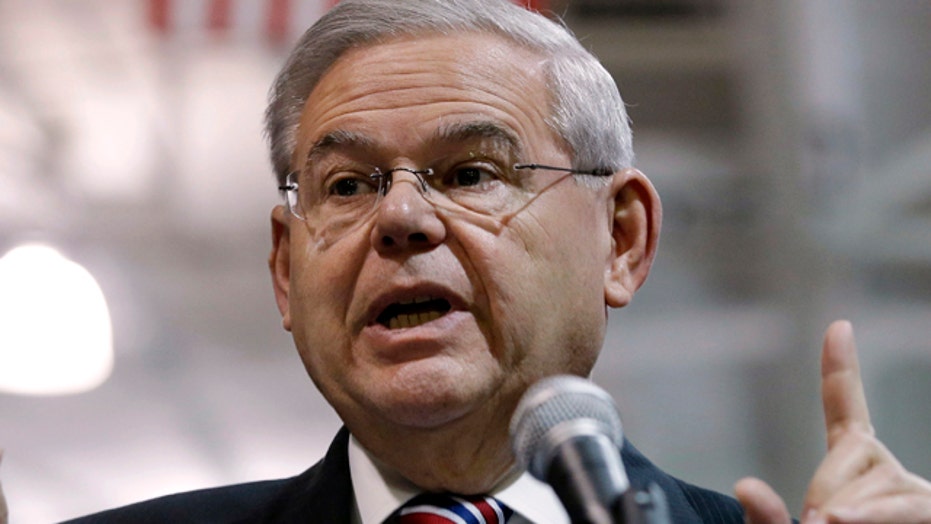 Are charges against Menendez politically motivated?

Fair and balanced debate on indictment of N.J. senator

A defiant Sen. Robert Menendez vowed Wednesday to fight corruption charges against him, hours after a federal grand jury handed up an indictment that accused the two-term New Jersey Democrat of using his office to help a party donor.

“I am not going anywhere,” Menendez said at an evening press conference in Newark. “This is not how my career is going to end.”

Menendez, a powerful political force in New Jersey and a leading skeptic of the Obama administration’s Cuba and Iran policies, was indicted on 14 counts, including conspiracy to commit bribery and wire fraud. He’s accused of using his office to improperly benefit a political donor who allegedly offered the senator an array of perks, including trips on his private jet and access to an exclusive Dominican resort.

The 61-year-old senator Wednesday night blasted what he called “false allegations,” which he said were being perpetuated “by those who have a political motivation to silence me.”

“But I will not be silenced,” he vowed. “I’m confident at the end of the day I will be vindicated and they will be exposed.”

The Newark grand jury has been investigating Menendez for official actions he took on behalf of his friend Dr. Salomon Melgen. Melgen, a Florida ophthalmologist, was also indicted Wednesday.

The indictment, which comes as the U.S. and other world powers are struggling to strike a nuclear agreement with Iran, is a blow at a critical time to Menendez, who is the top Democrat on the Senate Foreign Relations Committee and until recently was chairman. Menendez said late Wednesday he will "temporarily" step down from his committee post.

Menendez has acknowledged that he flew multiple times on Melgen’s private jet to the Dominican Republic and initially failed to properly pay for the trips. In 2013, Menendez agreed to reimburse Melgen $58,500 for the full cost of two flights.

The senator’s office later disclosed another flight from Florida to New Jersey in 2011, and said Menendez had repaid Melgen $11,250 for it.

Last year, Menendez disclosed that his campaign accounts had paid a law firm $250,000 for legal costs related to investigations by the Justice Department and the Senate Ethics Committee of his ties to Melgen.

Menendez has also acknowledged taking actions that could benefit Melgen, among them contacting U.S. health agencies to ask about billing practices and policies.

But the lawmaker has said he did nothing wrong and that he and Melgen have been friends for decades.

"We celebrated holidays together," he once told reporters. "We have been there for family weddings and sad times like funerals and have given each other birthday, holiday and wedding presents, just as friends do."

The indictment against Menendez also accuses the senator of accepting nearly $1 million worth of gifts between January 2006 and January 2013 as well as using the power of his Senate office to influence the outcome of “ongoing contractual and Medicare billing disputes worth tens of millions of dollars to Melgen and to support the visa applications of several of Melgen’s girlfriends.”

In one incident, “Girlfriend 3,” a Ukrainian national who worked as a model and actress living in Spain at the time, was denied a tourist visa to visit Melgen in Miami. On Feb. 15, 2007, Menendez staffers wrote a letter to the consul general asking a non-immigrant visa for his friend.

Federal investigators also point to emails between him and former Chief Counsel Kerru Talbot and a staffer with Customs and Border Patrol in ‎which Talbot asked CBP not to donate screening equipment to the Dominican Republic, but instead to allow a private contractor controlled by Melgen to provide that equipment.

Melgen came under renewed scrutiny when government data last year showed he had received more in Medicare reimbursements in 2012 than any other doctor in the country.

Menendez becomes the first sitting U.S. senator to face indictment since then-Sen. Ted Stevens, R-Alaska, in 2008. Stevens was found guilty of concealing gifts from donors on financial disclosure statements, but the Justice Department later dropped the case after admitting that prosecutors failed to turn over evidence that would have been favorable to his defense.

"Senator Menendez’s ethics lapses have long been a distraction to the United States Senate,” Andrea Bozek, a spokeswoman with the National Republican Senatorial Committee said in a written statement. “With today's indictment, the FBI and the Justice Department made it clear that Senator Menendez has betrayed the trust of New Jersey families. His actions reinforce all that the American people believe is wrong with Washington Democrats and closes the book on a Senate Democrat majority that put their personal interests ahead of the American people."

Menedez joined the Senate in 2006 after serving more than a decade in the House of Representatives.