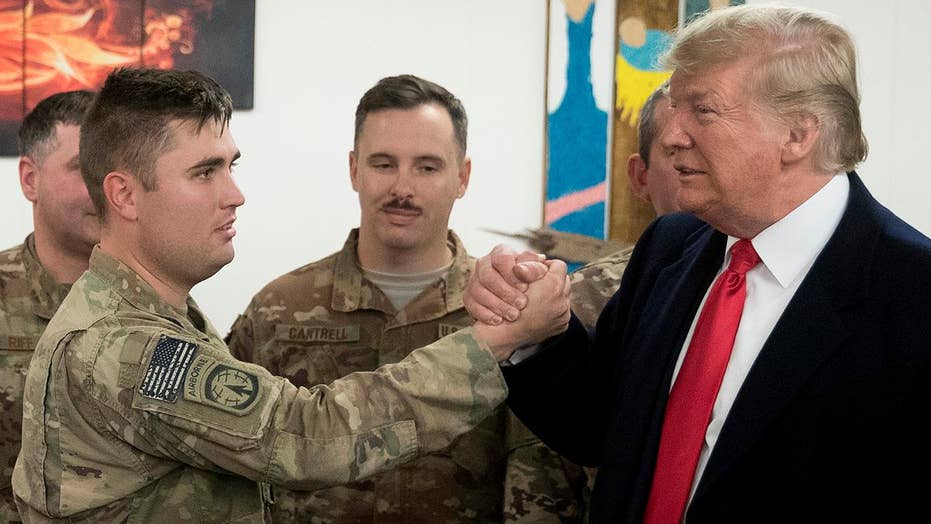 A serviceman and the president: 'I'm here because of you'

Raw video: President Trump responds to member of the U.S. Army who told the president he's the reason he returned to the military.

During his surprise trip to Iraq this week, President Trump shook hands with an Army soldier who said he went back into the military for the president.

“And I’m here because of you, so we have something in common,” Trump said with gratitude at the dining hall at al-Asad Air Base, Iraq, on Wednesday.

“Keep America great,” the soldier said to Trump, while taking a selfie with the president.

Addressing troops at the airbase in western Iraq late Wednesday, Trump defended his decision to pull forces from neighboring Syria, declaring of Islamic State militants: “We’ve knocked them out. We’ve knocked them silly.”

Trump told his audience in Iraq that the decision to withdraw the roughly 2,000 troops from Syria illustrated his quest to put “America first.”

Trump campaigned for office on a platform of ending U.S. involvement in foreign trouble spots, such as Syria, Afghanistan and Iraq. The Pentagon also is said to be developing plans to withdraw up to half of the 14,000 American troops still serving in Afghanistan.

“We’re no longer the suckers, folks,” Trump said at al-Asad Air Base, about 100 miles west of Baghdad. “We’re respected again as a nation.”

The base where Trump spoke is about 155 miles from Hajin, a Syrian town near the Iraqi border where Kurdish fighters are still battling Islamic State extremists.

“I made it clear from the beginning that our mission in Syria was to strip ISIS of its military strongholds,” said Trump, who wore an olive green bomber-style jacket as chants of “USA! USA!” greeted him.

Trump said he had no plans to withdraw the 5,200 U.S. forces in Iraq. That’s down from about 170,000 in 2007 at the height of the surge of U.S. forces to combat sectarian violence unleashed by the U.S.-led invasion to topple dictator Saddam Hussein.

Trump said that after U.S. troops in Syria return home, Iraq could still be used to stage attacks on ISIS militants.