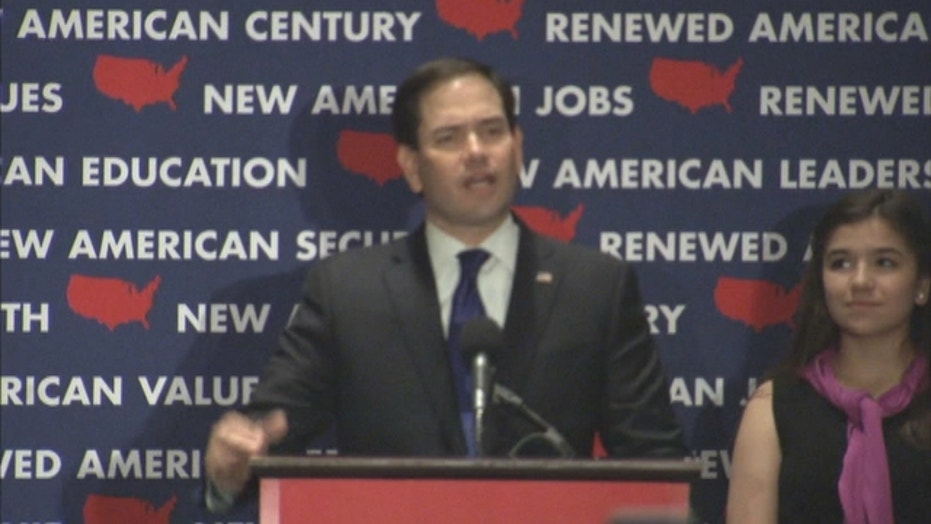 The Cuban-American senator said: The fact that I’ve even come this far is evidence of how special America is.”

MIAMI – Sen. Marco Rubio won the highest praise for his performance at nearly all the GOP debates.

Many polls smiled down on Rubio, as well.

But Tuesday brought Rubio’s presidential dreams a crushing blow – he lost the GOP primary in his own home state and announced he was dropping out, saying it was not meant to be, at least this year.

"It is not God's plan that I be president in 2016 or maybe ever," the Florida senator told a crowd of supporters in Miami.

Donald Trump and Hillary Clinton triumphed Tuesday in Florida's presidential primaries, capturing the biggest prize on a crucial day of voting and showcasing the strength of the two front-runners.

Shortly after Rubio took to the stage at his rally at Florida International University arena, it became clear he was ready to announce the end of his campaign.

Rubio, 44, paid homage to the people working on his campaign all around the country, and said: “There’s nothing more you could have done.”

He said that he was honored that someone with humble beginnings like him – the son of Cuban immigrants, a mother who was a cashier and a father who was a bartender – could run to be president of the United States, and get so far in the race.

The fact that I’ve even come this far is evidence of how special America truly is."

But he also expressed concern for the country.

"We live in a republic and our voters make these decisions," Rubio said.

"America is in the middle of a real political storm, a real tsunami and we should have seen this coming," Rubio said.

Disappointment swept through the crowd of Rubio supporters that had gathered at FIU.

There were groans throughout the room when Rubio said he wasn't going to be president and may never be. When Rubio closed with a prayer, a number of young supporters openly wept.

Many said they had admired Rubio’s determination for the most of the campaign to focus on issues and to stay positive.

Drew Maggelet, a 20-year-old University of Miami political science major in shorts and a short button down sleeve shirt, said he voted for the first time in presidential primary today, casting a ballot for Rubio.

"I think he represents the best of America, " Maggelet said to Fox News Latino. "He's offering an optimistic vision instead of a pessimistic view of America other candidates are expressing."

A new Morning Consult analysis finds that Ted Cruz may gain most from Rubio’s exit from the race.

Forty-seven percent of Rubio supporters said Cruz was their second choice for the nomination, followed by 27 percent picking John Kasich. Only 13 percent said they would support Trump, and 14 percent said someone else or don't know.

Cruz praised Rubio and wished him the best.

"Marco Rubio is a friend and a colleague who ran an optimistic campaign focused on the future of our party, conservative principles, and uplifting the American people,” said Cruz in a statement. “The Republican primary was stronger because of the ideas he brought forth. Marco's story embodies the promise of our great nation. I know he will continue to be a champion for limitless opportunity in America, and I wish Marco, Jeanette, and their four kids the very best."

Some Republicans worried about the choices left for GOP nominee.

Alfonso Aguilar, a Republican strategist who had supported Jeb Bush until he left the race, then backed Rubio, lamented what he saw as Trump’s near-certain nomination.

“It looks like Trump is going to be the GOP nominee,” Aguilar said to Fox News Latino, adding that Rubio had delivered a gracious speech.

“It reminds me of the speech Ronald Reagan gave when he got out of the race in 1976. Just like at that time, I think a lot of people are watching and listening and saying ‘We are about to nominate the wrong guy.”

Rubio's decision was prompted by losses in all but three of the presidential nomination contests, but Florida's winner-take-all primary proved the most devastating. Only six years earlier, he was a tea party favorite who crushed the GOP's "establishment" candidate to win a seat in the U.S. Senate.

But the political tables turned on him in the 2016 presidential race, where he was lambasted as mainstream in a year when voters cried out for an outsider.

Like other Republicans, Rubio had pledged to support the eventual GOP nominee. But, in recent days, he expressed having second thoughts. He told reporters Saturday that the chaos and divisiveness at Trump's rallies, including the one in Chicago canceled last week, had made it harder for him to view the front-runner as a viable candidate.

Rubio had seemed destined for the national spotlight. Time magazine placed him on its cover in early 2013, dubbing him the "Republican Savior."