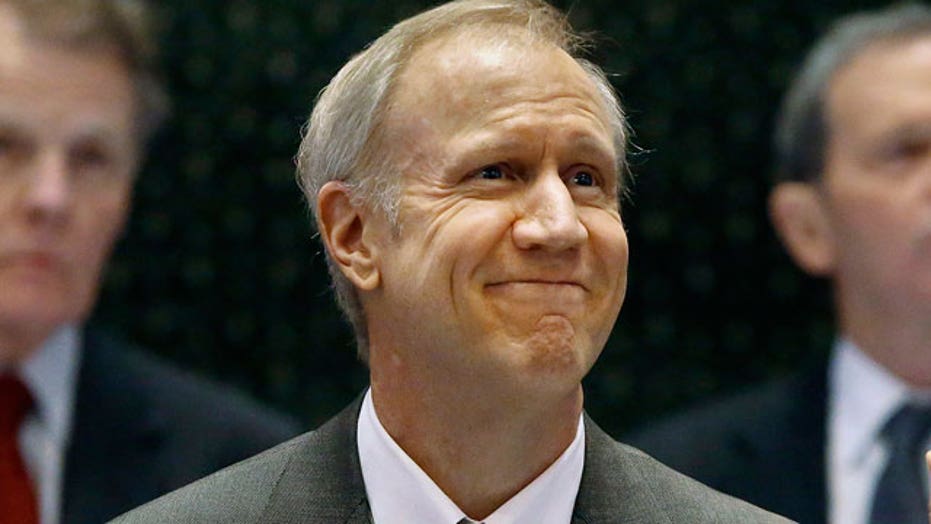 While Bruce Rauner campaigned for governor of Illinois, he repeatedly promised change. Opponents, supporters and undecided voters alike complained he never defined what that change meant.

In his first budget address to the Illinois General Assembly, the new Republican governor promised deep cuts, to the tune of $6.7 billion. Higher education, local governments and other state departments are all subject to the cleaver wielded by the new governor -- and the chronically underfunded pension system is due for an overhaul.

But Rauner also picked a big fight with the state employee unions, ahead of his address.

One of his first moves upon taking office was to issue an executive order blocking “fair share fees.” This is money unions get from the paychecks of state employees who elect not to be in a union.

“The structure that is currently in place, inside government, forcing government employees to pay union dues, even if they don’t want to be in a union -- that is fundamentally unconstitutional and it is against the American system of freedom of choice,” Rauner told Fox News.

Unions responded by calling the executive order “illegal” and a “scheme” to strip state workers of their rights.

Roberta Lynch, the director of Illinois’ largest state employee union AFSCME Council 31, said, “It is crystal clear by this action that the governor’s supposed concern for balancing the state budget is a paper-thin excuse that can’t hide his real agenda: Silencing working people and their unions who stand up for the middle class.”

Professor Martin Malin, a labor law expert at Chicago’s Kent College of Law, believes the first impact of the governor’s executive order will be the unification of all organized labor groups around the state and nationwide.

He predicted legal challenges and, since collective-bargaining agreements expire at the end of June, a statewide strike. “I would not plan on vacationing in a state park [in Illinois] this summer,” Malin said.

Arguably, the battle in Illinois becomes a fight for survival.

“No question, in the short-term, [Rauner’s] going to lose,” Malin predicted, speaking to both the legal merits of his executive order and the passion the new governor is igniting.

Even conservatives are surprised how aggressively Rauner jumped into the ring. John Tillman, CEO of the conservative Illinois Policy Institute, said the financier turned governor started more boldly than Walker.

That does not mean conservatives are unhappy. “For the first time in many years, this budget places the interest of family budgets on an equal footing with those who directly benefit from state spending,” Tillman said.