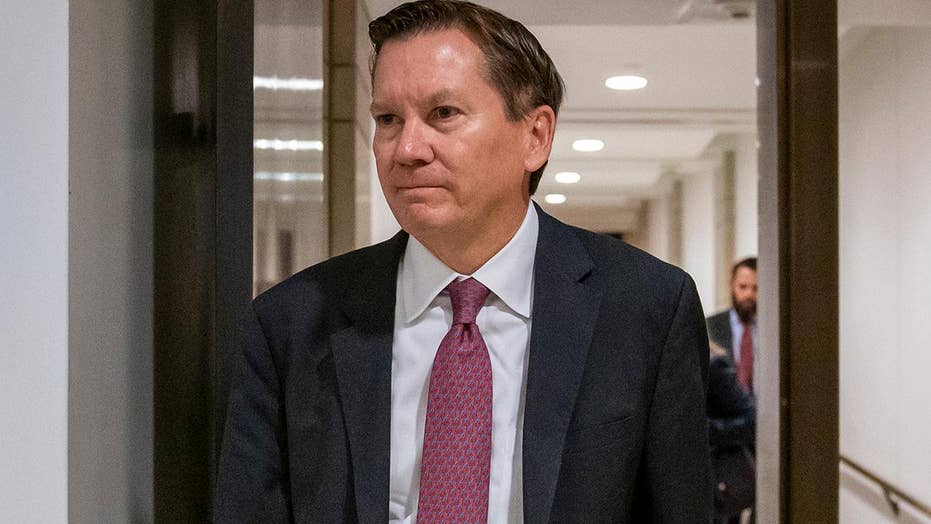 Whistleblower did not disclose contact with intel committee to inspector general, source says

Intelligence community watchdog Michael Atkinson reportedly says he did not have any independent or firsthand knowledge of contacts between the whistleblower and Democrat-led House Intelligence Committee; Catherine Herridge reports on the details.

Intelligence Community Inspector General Michael Atkinson, in testimony to House lawmakers about the whistleblower complaint on President Trump's controversial phone call with his Ukrainian counterpart, could not explain what accounted for the 18-day window between the July 25 call and the Aug. 12 complaint filing — or when exactly the whistleblower contacted a key Democrat's staff, sources familiar with the testimony told Fox News.

The whistleblower's contact with Intelligence Committee Chairman Rep. Adam Schiff's staff before filing the complaint in mid-August has prompted renewed scrutiny of Schiff.

Sources familiar with Atkinson's closed-door, transcribed interview Friday with members of the House Intelligence Committee also noted that Atkinson said the whistleblower did not disclose the contact – during that 18-day window – with Schiff's office, as Fox News first reported Friday. Sources said Atkinson testified that the whistleblower, in filing the complaint, left "blank" a section in which he or she could have disclosed that congressional contact.

Atkinson revealed that his only knowledge of the contact came from media reports, sources said.

Sources further have told Fox News that Atkinson revealed the whistleblower volunteered he or she was a registered Democrat and had a prior working relationship with a prominent Democratic politician. Attorneys for the whistleblower at the firm Compass Rose did not respond to requests for comment on this work history or on the lack of disclosure about the contact with Schiff's office.

Republicans have criticized Schiff for not initially revealing the committee's early contact with the whistleblower, with President Trump going so far as to allege that Schiff may have "helped write" the complaint. GOP Rep. John Ratcliffe said there is an inherent conflict because the only entities that can explain the contact are Schiff and his Democratic staff, who are also running the investigation.

Democrats counter that House Republicans are obsessing over process, rather than the underlying issue of the president’s request to Ukraine to investigate the Bidens.

The whistleblower's attorneys, meanwhile, maintain the whistleblower did not receive assistance from congressional sources in writing the complaint, which was a detailed nine-page document including an appendix — a factor that could account in part for the 18-day window between Trump's call with Ukrainian President Volodymyr Zelensky and the filing of the thorough complaint.

The emergence of the complaint, which alleged that Trump pressured Zelensky to investigate Democratic presidential candidate Joe Biden and his son Hunter's dealings in the country, prompted a formal impeachment inquiry last month.

While the revelation about the aide's contact with Schiff's office spurred GOP criticism, Schiff's office denied that the intelligence committee had reviewed or received the complaint in advance.

In order to assess the credibility of the complaint, Atkinson's office conducted a preliminary investigation that included interviews with a handful of witnesses, sources said, including two of the whistleblower's supervisors. One witness was described as having direct knowledge of the transcript process and handling, Fox News is told.

In a statement after Friday's session with the inspector general, Schiff fired back at Republicans, saying they have “continued the president’s strategy of deflection by making the absurd claim that because a whistleblower contacted the committee seeking guidance, the committee cannot conduct an investigation into the complaint.”

“If that were true, no whistleblower could contact Congress, and no committee could conduct an investigation,” Schiff said.