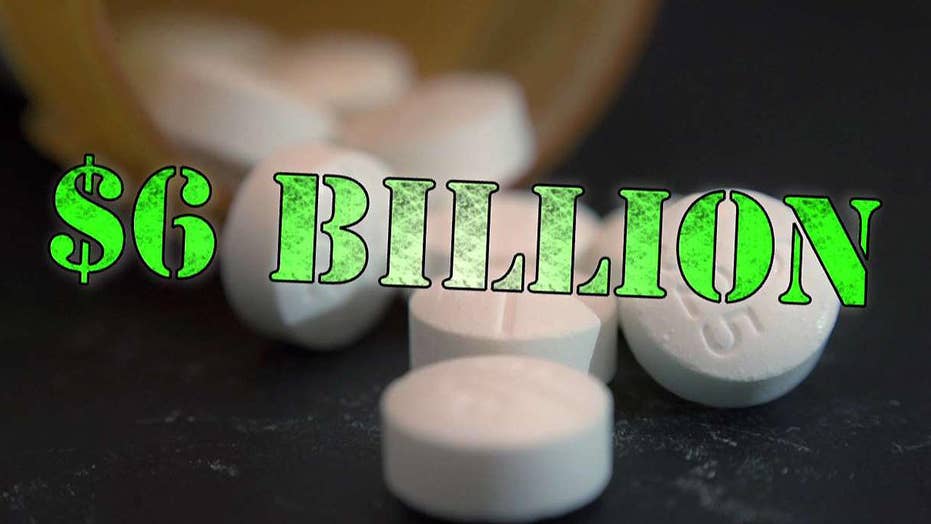 After declaring the nation’s opioid epidemic a public health emergency in October, President Trump revealed his plans to crack down on the health crisis.

His plan, which he discussed in March, includes harsher penalties for drug traffickers and lowering the amount of drugs needed to trigger mandatory minimum sentences for dealers.

“These are terrible people and we have to get tough with those people,” Trump said of traffickers and dealers. “This isn’t about committees ... this is about winning a very tough problem.”

The Center for Disease Control and Prevention (CDC) estimates that 115 Americans die daily from opioid-involved deaths. Opioids, including prescriptions and heroin, killed 42,000 people in the U.S. in 2016 – the highest on record.

It’s important that the full weight of the federal government – with each Cabinet department determining their role in the crisis – is involved in tackling the epidemic, said Tom Coderre, a former official with the Obama administration’s Health and Human Services Substance Abuse and Mental Health Services Administration.

“The opioid crisis is multi-faceted and multi-dimensional. It’s not like there is a secret weapon out there,” Coderre, recently hired as a senior adviser to Rhode Island Gov. Gina Raimondo to help combat the opioid crisis, told Fox News.

Here’s a look at what the Trump administration has proposed to deal with the crisis.

Trump has often mused that certain countries – such as Singapore – have fewer issues with drugs because of the harsh penalties dealers can face if caught. He has argued that a person in the U.S. can receive the death penalty or life in prison for shooting one person, but a drug dealer who potentially kills thousands spend little to no time in jail.

When the president unveiled his plan to combat the epidemic, he brandished the death penalty as a fitting punishment for traffickers.

“Drug traffickers kill so many thousands of our citizens every year,” Trump said. “That's why my Department of Justice will be seeking so many tougher penalties than we've ever had and we'll be focusing on the penalties that I talked about previously for big pushers, the ones that are killing so many people, and that penalty is going to be the death penalty.”

He added, “Other countries don't play games ... But the ultimate penalty has to be the death penalty.”

"The ultimate penalty has to be the death penalty."

The Justice Department said the federal death penalty is already available for several limited drug-related offenses, including violations of the “drug kingpin” provisions of federal law.

"[T]his should also include the pursuit of capital punishment in appropriate cases," he said. "Congress has passed several statutes that provide the Department with the ability to seek capital punishment for certain drug-related crimes."

Sessions added, "I strongly encourage federal prosecutors to use these statutes, when appropriate, to aid in our continuing fight against drug trafficking and the destruction it causes in our nation."

President Trump, along with first lady Melania Trump, traveled to New Hampshire in March 2018 to meet with people working to combat the opioid epidemic. The president also unveiled his plan to combat the nationwide crisis. (Reuters/Jonathan Ernst)

Trump has called on Congress to pass legislation which would lower the amount of drugs needed to trigger a mandatory minimum sentence for dealers who knowing distribute illicit opioids.

Congress already has plans to weigh a range of bills targeted at curbing the epidemic.

Republican Sens. Tom Cotton of Arkansas and Lindsey Graham of South Carolina have put forth a bill that includes lowering the amount of fentanyl needed to invoke mandatory minimum sentences in certain distribution cases.

Fentanyl is a high-risk type of opioid used by doctors to treat pain.

“It’s past time the punishment matched the crime when it comes to opioid distribution and trafficking,” Cotton said in a statement.

Part of Trump’s plan to attack the nationwide crisis is to increase research and development through public-private partnerships between the federal National Institutes of Health and pharmaceutical companies.

With the public health emergency declaration, officials are able to more easily deploy state and federal workers, secure grants for the unemployed and shift funding from certain programs – such as HIV or AIDs programs – to provide substance abuse treatment for certain individuals.

Trump wants to see the number of opioid prescriptions cut by one-third within three years. He also called for expanding access to proven treatment and recovery efforts.

Trump’s plan includes broadening education and awareness as well – something he called for last fall when he declared the opioid epidemic a public health emergency.

This awareness campaign includes broadcasting “great commercials” to scare kids from dabbling in drugs. Trump also announced the creation of a new website, CrisisNextDoor.gov, where people can share their stories about addiction.

Gary Mendell, founder and CEO of the nonprofit Shatterproof, said the crisis needs more “attention and awareness,” which the president can provide. An emergency declaration, he told Fox News, “creates recognition ... and awareness around the country that this epidemic needs right now.”

In October, Trump declared the crisis a national public health emergency, short of the national state of emergency sought by a presidential commission he put together to study the issue. It was renewed in January.

HHS has issued public health emergency declarations in the wake of natural disasters as well as the spread of diseases.

The agency issued its first declaration for the Zika virus in Puerto Rico in August 2016. It was last renewed in April 2017.

Public health emergencies were also declared in New York following Hurricane Sandy in November 2012 and in Missouri following a series of storms and tornadoes in May 2011.