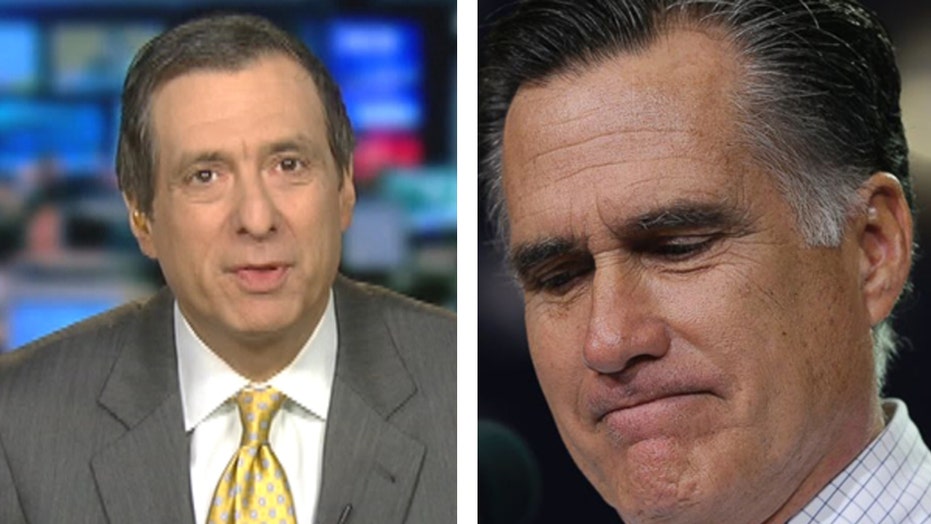 Kurtz: Behind the Romney mockery

The same pundits who were handicapping how Mitt Romney would fare in a crowded GOP field have shifted gears to analyze why the on-again, off-again candidate was bailing out after all.

One giant factor was overlooked: the relentlessly negative media coverage that helped nudge Romney out of the race.

Let’s face it, the press reaction to a third Romney presidential campaign was a collective groan. Now this might not have mattered if Romney was absolutely determined to run. But it’s clear now that he was wading into the waters to gauge the temperature. And it was icy.

That chill didn’t just emanate from the MSM, which had an exceedingly strained relationship with Romney and his camp in 2012. It was conservative commentators, some of them on Fox, and places like the Wall Street Journal editorial page that were opposing or belittling another Romney run.

The weekend coverage focused heavily on Romney facing defections from some donors (and a few operatives), but that’s because the press has tunnel vision when it comes to fundraising. Most pundits were convinced Howard Dean would win the nomination because he raised truckloads of cash. Romney could have gotten the $50 million to $100 million he needed.

But as Romney was reminded of how grueling the process is, the criticism and mockery all played out in the media. Only the Washington Post gave it a brief mention, citing “a barrage of critical reaction from many Republican leaders, conservative commentators and major donors.”

To some degree, the press was reflecting a lack of enthusiasm among GOP activists and county chairmen. But it was telling how such publications as the New York Times and Politico could barely find a Republican to say positive things about Mitt.

And it was all too easy for everyone in the media—conservatives, liberals, reporters—to recycle the blunders of 2012, from the 47 percent to binders full of women. I mean, it’s all on videotape. And it served as a reminder of Romney’s awkward demeanor on the trail.

Adding to the sense of disbelief was Romney’s two years of denials that he was considering another campaign, followed by the spate of leaks that he was and that this time he would run as the “authentic” Mitt.

I was never convinced that Romney was going to run again. But half an hour before the Friday morning call in which he was to announce his intentions, the Daily Beast quoted unnamed advisers as saying Mitt was running. What a colossal blunder. Why go into DEWEY DEFEATS TRUMAN territory for what would be an exceedingly ephemeral scoop, when the risk of humiliation for being wrong is so much greater?

The conventional wisdom that Romney’s withdrawal helps Jeb is probably right, and we just saw an example of Bush being more adept at working the press.

In a piece on Bush’s years at Phillips Academy in Andover, the Boston Globe quoted him as saying: “I drank alcohol and I smoked marijuana when I was at Andover. It was pretty common.”

And: “He barely got grades high enough to avoid being expelled, he said in the interview.”

And when a former roommate, who was kicked out for drug use, said he and Bush bullied another student and sewed his pajama bottoms together so they were impossible to put on, Jeb responded: “I don’t believe that is true. It was 44 years ago and it is not possible for me to remember.”

The "bully" stuff seems like really small potatoes, three years after the press tried to pin that label on a young Romney. But what’s smart is Bush cooperating with the story and getting out these minor embarrassments so early in the cycle, thus rendering them old news.

But Jeb can expect more media scrutiny now that the other major contender for establishment favorite has dropped out, just a week after their mysterious summit meeting.