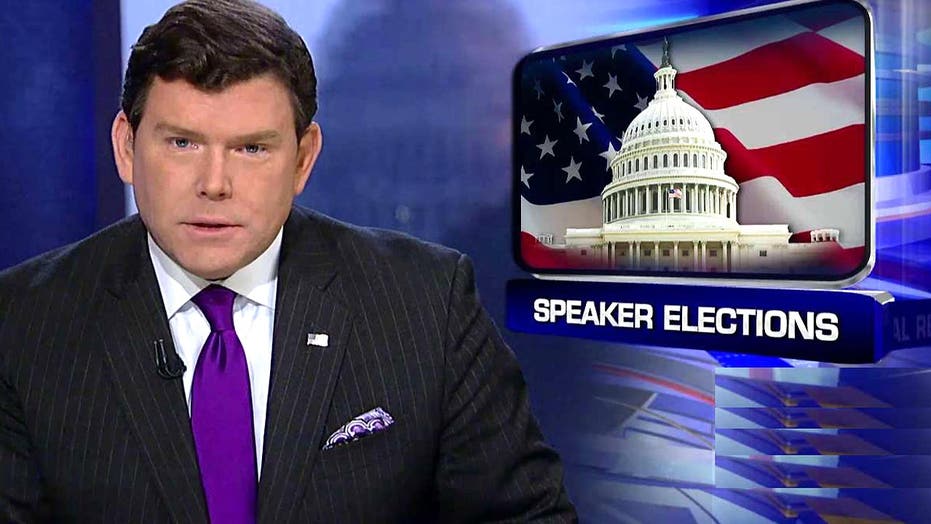 Update on race for Speaker of the House

The three Republicans vying for House speaker will face off Thursday in a vote that could signal whether a caucus beset by infighting and tactical confusion can come together once John Boehner leaves office.

McCarthy is said to be trying to distance himself from Boehner, amid some conservative concerns he'd represent a mere continuation of the sitting speaker's term. The other candidates also are vowing a fresh start.

"I think McCarthy's pitch was `I'm not John Boehner, I'm going to run things differently, I'm my own man,"' Rep. Blake Farenthold, R-Texas, said after the candidates made their pitches to members during a meeting Tuesday.

The vote set for Thursday is not the final floor vote; that will take place Oct. 29. On Thursday Republicans will select their nominee for speaker, who then would be seen as the odds-on favorite for the post since they hold the majority in the chamber. However, parliamentary rules could make for an unpredictable vote on Oct. 29.

The speaker's race already has seen a few curveballs since Boehner suddenly announced his retirement at the end of the month and McCarthy swiftly positioned himself as the presumptive next in line.

Shortly after announcing his candidacy, McCarthy was seen to stumble in a Fox News interview where he appeared to link Hillary Clinton's dropping poll numbers to the congressional Benghazi committee. His comments fueled Democratic charges that the committee is merely political, which GOP leaders deny.

McCarthy himself has walked back the comments, and the leader of that committee, South Carolina Rep. Trey Gowdy, told MSNBC on Wednesday that "Kevin screwed up." He also noted McCarthy had "apologized" for the remark.

Amid the backlash over McCarthy's Benghazi remarks, Chaffetz entered the leadership race over the weekend.

Boehner also decided to postpone other leadership elections until after the Oct. 29 full House vote for speaker.

Whether McCarthy can rally the GOP caucus behind him is an open question. He is thought to have by far the most votes in his corner, but Chaffetz -- while admitting he's the underdog -- says he's furiously talking to members. The media-savvy and highly visible chairman of the House oversight committee claims he can bridge the Boehner-era divide among House Republicans, whose differences have fueled fights over budgets, ObamaCare, the debt ceiling and most recently Planned Parenthood.

"I think it's time for a fresh new start," Chaffetz told Fox News. "Kevin clearly has the majority of our conference. My fear is (he) doesn't have 218 votes on the floor of the House."

In another development, the House Freedom Caucus, consisting of some 30 to 40 members, issued a statement late Wednesday saying that after exchanges with all the candidates, it would vote for Webster in Thursday’s election because he would be “best equipped to earn back the trust of the American people.”

A divided vote on Thursday could preview problems for the Oct. 29 election and beyond.

That's because in order for the House to formally choose a speaker, a majority of members must back a single candidate. The magic number, referenced by Chaffetz, is likely 218 (though it could be lower, depending on absences and other factors) -- and nobody can win the speakership without reaching that level of support.

Republicans have nearly 250 members in the House and on paper have the numbers to win against the Democrats' nominee, likely Nancy Pelosi. But if the winning Republican nominee on Thursday comes out with a tally short of 218, he'll have to spend the next several weeks trying to rally support to get to that number.

Some conservative groups and members were pushing back against McCarthy's bid in the run-up to Thursday's vote. On Wednesday, the Tea Party Patriots were passing around shirts with a cartoon image of McCarthy holding a glass of wine and a cigarette over the name, "McBoehner," in a bid to cast him as the speaker's double.

In a curious development, Rep. Walter Jones, R-N.C., also sent a letter to House Republican Conference Chairwoman Cathy McMorris Rodgers, R-Wash., urging a full vetting of all leadership candidates to avoid a repeat of 1998, when the conference selected then-Rep. Bob Livingston in November to succeed outgoing House Speaker Newt Gingrich. It then emerged Livingston had been conducting an affair. Jones asked that any candidate who has committed "misdeeds" withdraw.

Asked by FoxNews.com to elaborate, Jones said he doesn't "know anything" specific about any of the candidates, but, "We need to be able to say without reservation that 'I have nothing in my background that six months from now could be exposed to the detriment of the House of Representatives.'" He said he wants to make sure the candidates have "no skeletons."

Fox News' Chad Pergram and FoxNews.com's Cody Derespina and The Associated Press contributed to this report.