Reps. Mark Meadows and Jim Jordan speak out on 'The Ingraham Angle' after introducing articles of impeachment against Deputy Attorney General Rod Rosenstein.

The impeachment articles accuse Rosenstein of intentionally withholding documents and information from Congress, failure to comply with congressional subpoenas and abuse of the Foreign Intelligence Surveillance Act (FISA).

It was not immediately clear whether the House of Representatives would consider the resolution before lawmakers begin the August recess Thursday afternoon. The House will reconvene Sept. 4.

The resolution states it will be "referred to the Committee," meaning the Judiciary Committee, for further review. That language suggests the full House will not immediately consider the articles of impeachment.

The articles were introduced by Reps. Mark Meadows of North Carolina and Jim Jordan of Ohio, the chairman and a prominent member of the conservative House Freedom Caucus.

In an exclusive interview on Fox News' "The Ingraham Angle" on Wednesday night, Meadows said it would be possible to effect a so-called "privileged" resolution on impeaching Rosenstein as early as Thursday morning, which would require a vote within two days -- although the impending House recess would likely delay that vote unless it were held quickly.

Both Meadows and Jordan told host Laura Ingraham the effort was long overdue.

"For nine months, we've asked for documents, and that's all we want," Meadows said. "Not only have subpoenas been ignored, but information has been hidden, efforts have been stonewalled."

"We've caught the Department of Justice hiding information, redacting information that they should not have redacted," Jordan charged, adding that Rosenstein had attempted to intimidate House staffers with subpoenas.

"We're tired of the Justice Department giving us the finger."

"We're tired of the Justice Department giving us the finger," Jordan added. "The American people are sick of it."

Jordan said he had not spoken to House Majority Leader Kevin McCarthy, R-Calif., about the impeachment articles, but said that "The American people are with us -- that's what matters."

But Rep. Adam Schiff, D-Calif., the ranking member of the House Intelligence Committee, tweeted that the articles "were filed in bad faith and show [the] extraordinary lengths to which House Republicans will go to protect [President] Trump." 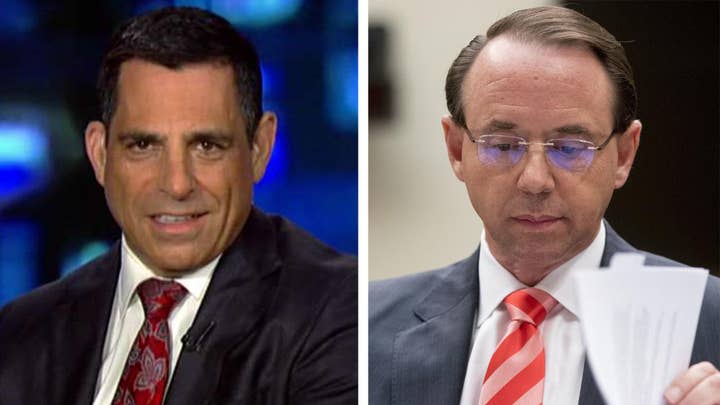 In one article of impeachment, Rosenstein is accused of improperly signing off on the FISA surveillance warrant application against ex-Trump aide Carter Page.

The application heavily relied on the infamous Steele Dossier, which was funded by the Clinton campaign and the DNC and contained unverified, salacious allegations against Trump.

"Under Mr. Rosenstein’s supervision, the Department of Justice and FBI intentionally obfuscated the fact the dossier was originally a political opposition research document before the FISC [Foreign Intelligence Surveillance Court]," the articles of impeachment state.

They continue: "As Deputy Attorney General, Mr. Rosenstein has failed in his responsibility for the proper authorization of searches under FISA, and his conduct related to the surveillance of American citizens working on the Trump campaign has permanently undermined both public and congressional confidence in significant counterintelligence program processes."

The documents also charge that Rosenstein has an impermissible conflict of interest.

“His conduct in authorizing the FISA surveillance at issue in the joint congressional investigation makes him a fact witness central to the ongoing investigation of potential FISA abuse,” the articles state. “Deputy Attorney General Rosenstein’s failure to recuse himself in light of this inherent conflict of interest and failure to recommend the appointment of a second Special Counsel constitute dereliction of duty."

Rosenstein named Special Counsel Robert Mueller to lead the Trump-Russia probe after Rosenstein’s boss, Attorney General Jeff Sessions, recused himself from the investigation because of Sessions’ own role in the Trump campaign.

He has since clashed with House Republicans for months over requests for Department of Justice documents. GOP leaders grilled Rosenstein at a hearing in June for what they called his inadequate transparency.

In recent weeks, calls by top Republicans to remove Rosenstein grew louder. A simple majority of the House would suffice to impeach Rosenstein, but a two-thirds vote of the Senate would be required to remove him.

The move came about two hours after GOP lawmakers met with Justice Department officials who have been working to provide documents to several congressional committees about decisions made during the 2016 presidential campaign. The department has provided lawmakers with more than 800,000 documents, but Meadows said after the meeting that there was still "frustration" with how Justice has handled the oversight requests.

It was not immediately clear whether the Republicans' move would affect the DOJ's document production to the House, which GOP leaders have been more pleased with in recent weeks.

House Oversight and Government Reform Chairman Trey Gowdy, R-S.C., said after the meeting that he was pleased with the department's efforts and wouldn't support Rosenstein's impeachment. House Speaker Paul Ryan has also said he is satisfied with progress on the document production.