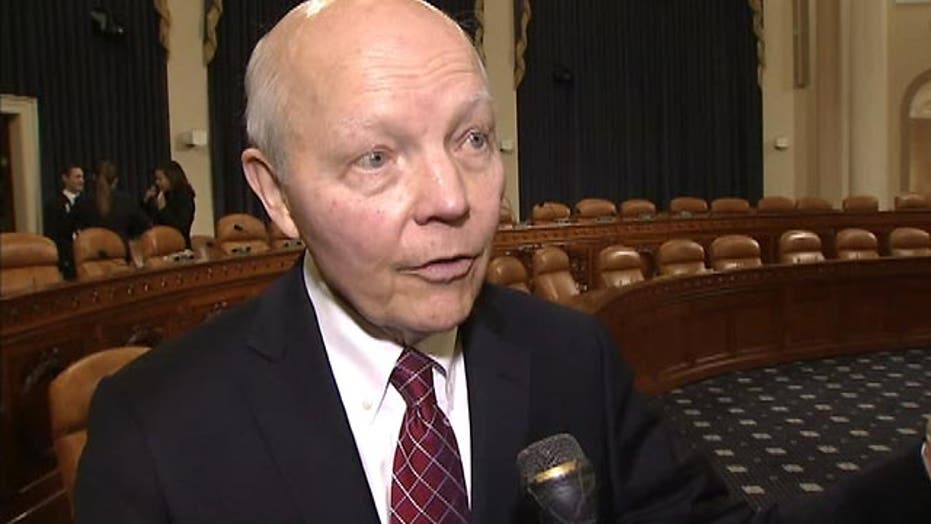 IRS Commissioner John Koskinen talks to 'On the Record' after grilling at House hearing, insists customer service is highest priority

While facing budget cuts, the IRS nevertheless prioritized worker bonuses, union activity and the implementation of President Obama’s health care law over assisting taxpayers during tax season, according to a new report released Wednesday by the House Ways and Means Committee.

The findings, in a Republican-led report, were released ahead of a subcommittee hearing Wednesday morning with IRS Commissioner John Koskinen.

At the hearing, Koskinen stressed that the agency is significantly under-funded, and those cuts have consequences.

He said less funding means there will be a decline in service for taxpayers, and pledged that service would improve if they got more money.

"Customer service -- both on the phone and in person -- has been far worse than anyone would want. It's simply a matter of not having enough people to answer the phones and provide service at our walk-in sites as a result of cuts to our budget," he said.

But Republicans argued the IRS is making bad spending choices. "I would just suggest to you that there's hardly a person in America today that isn't doing more with less, that hasn't tightened their belt and learned how to work with less," Rep. Mike Kelly, R-Pa., said.

The IRS has faced congressional budget cuts of $1.2 billion since 2010, and has faced criticism in recent years over the targeting of conservative groups applying for tax-exempt status and reports of wasteful spending. The new report said the cuts were intended to “force the IRS to manage its resources more effectively and immediately stop inappropriate activities.”

However, while cuts were made in part to focus the agency on customer service, the report asserted that “spending decisions entirely under the IRS’s control led to 16 million fewer taxpayers receiving IRS assistance this filing season.”

The panel found the IRS had cut customer services while continuing to hand out bonuses to employees, allowing staff to conduct union activities, failing to collect debt owed by employees of the federal government and spending over $1.2 billion on implementing ObamaCare.

Even though the IRS’s budget for taxpayer assistance remained flat from fiscal year 2014 to 2015, the level of over-the-phone customer service significantly decreased, with the agency shifting staff in customer service to focus on written correspondence instead of telephone calls. Meanwhile, the number of calls doubled in that period.

The panel found that wait times increased from 18.7 minutes to 34.4 minutes, and answered calls decreased from 6.6 million to 5.3 million.

Despite the drop in service, there was no significant decrease in bonuses for IRS employees. Notably, in November 2014, despite another round of budget cuts at the IRS, Koskinen announced that employees would receive bonuses at the same level as for the previous year, unless they had substantiated conduct issues, the report said.

The report noted that while the IRS’s implementation of ObamaCare was deemed a success by Koskinen, “the IRS achieved this supposed success by prioritizing … implementation over other activities, including core responsibilities like taxpayer assistance.”

The panel also claimed the agency had failed to pursue recommendations for streamlining and reducing waste and abuse. It concluded that what it called “large areas of systemic waste and inefficiency” present in 2010 remained unaddressed in 2015, and highlighted in particular that the IRS spent $2.1 million on litigation services that the government could have conducted itself.