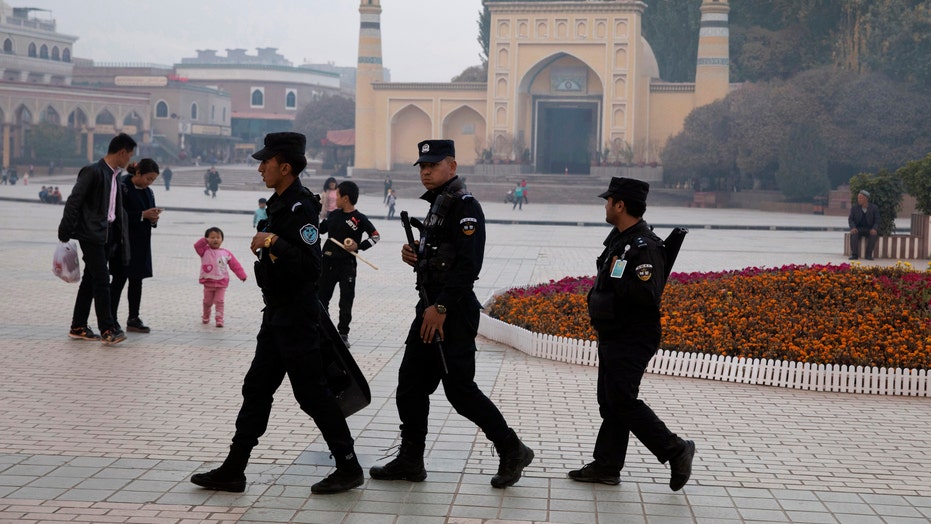 The House of Representatives on Tuesday overwhelmingly approved a bill requiring the Trump administration to toughen its response to China’s persecution of its Muslim minority, demanding sanctions on Chinese officials and export bans.

Passing in a 407 to 1 vote, the House version of the bill amends an earlier Senate bill to place restrictions on the export of devices that could be used for surveillance of the Muslim Uighur group or restrict their communications.

It calls on President Trump to condemn the abuses against Muslims and call for the closure of mass detention camps in the northwestern region of Xinjiang, according to Reuters.

Uighur security personnel patrol near the Id Kah Mosque in Kashgar in western China's Xinjiang region. Classified documents, leaked to a consortium of news organizations, lay out the Chinese government's deliberate strategy to lock up ethnic minorities to rewire their thoughts and even the language they speak. (AP Photo/File)

U.S. government officials believe that China has placed anywhere from 800,000 to 2 million Turkic Uighurs in reeducation camps under harsh conditions.

Outside the camps, the 11 million Uighurs living in Xinjiang live under constant surveillance and discrimination from the Chinese government. They watch as the Chinese bulldoze through their mosques and in some cases, their communities.

A November report revealed that Chinese authorities had allegedly been sending male “relatives,” who were merely Chinese officials sent to spy on Uighurs, to stay with the Muslim women whose husbands had been sent to detainment camps. The Chinese officials would stay for up to a week and in some instances share a bed with the women.

China has consistently denied any mistreatment of the Uighurs, claiming the camps provide vocational training. It has warned of retaliation “in proportion” if Chen were targeted.

In response to the new legislation, China may consider imposing visa restrictions on U.S. lawmakers and ban all U.S. passport holders from entering Xinjiang, according to the editor-in-chief of the Communist Party-backed Global Times.

“China’s oppression of millions of Uyghurs [sic] is a gross violation of human rights," tweeted House Minority Leader Kevin McCarthy. "Today's passage of the Uyghur Human Rights Policy Act sends a message to the Communist Party: power cannot be maintained at the expense of the people without substantial consequences."

Given the near-unanimous support for the bill, the president likely cannot afford the political blow of going against Congress, though he acknowledged that the Hong Kong legislation, and in turn the Uighur legislation, will hinder trade negotiations with China.

Lawmakers are working to resolve differences between the Senate and House bills to agree on one version before the end of the year, according to Bloomberg.