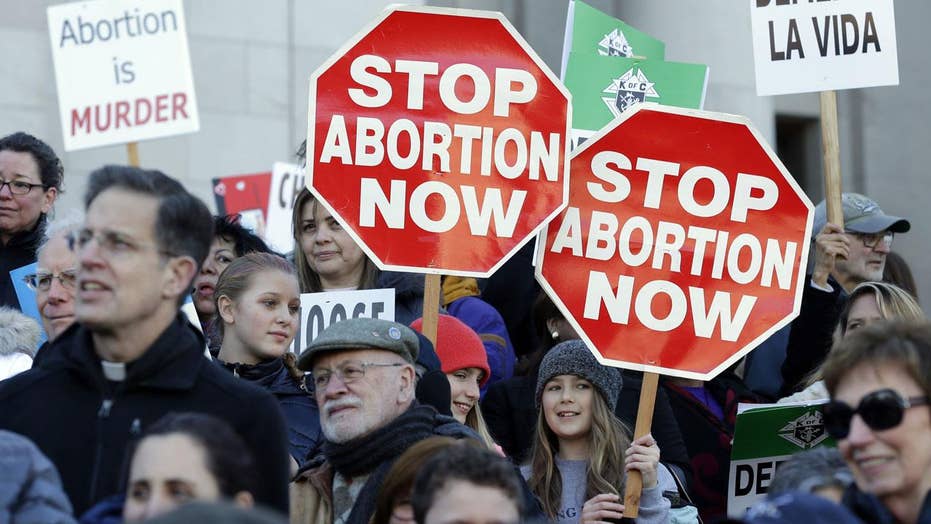 Abortion at center for the 'soul' of the Left

Democrats are debating over whether pro-life candidates should be allowed in the party. Progressives groups have argued opposition to abortion goes against principles of progressivism. Tucker takes on the executive director of Democracy for America

The Republican-controlled House on Tuesday approved a bill that would ban abortions after 20 weeks of pregnancy -- a measure backed by the Trump White House but still facing long odds in the Senate.

“So often we get caught up in the policies of this issue and we forget that these are babies, for goodness sake," Alabama Republican Rep. Martha Roby said in a speech on the House floor. "They feel pain and we need to protect them.”

“When abortion is banned, it does not go away,” Oregon Democratic Rep. Suzanne Bonamici said on the floor before the vote. “It drives women to unsafe back alleys and to dangerous self-induced abortion.”

The White House said Monday that it “strongly supports” the efforts to “secure critical pro-life protections” and that the bill provides children with the “stronger protections” they deserve.

“The bill, if enacted into law, would help to facilitate the culture of life to which our Nation aspires,” the White House also said in a statement. “Additionally, the bill would promote a science-based approach to unborn life, as recent advancements have revealed that the physical structures necessary to experience pain are developed within 20 weeks of fertilization.”

The measure, if enacted into law, would allow the procedure after 20 weeks in cases of rape, incest or to save the life of the mother and would not penalize women. However, it would criminalize other abortions after 20 weeks and punish abortion providers with a maximum five-year jail sentence.

The landmark 1973 Supreme Court case Roe v. Wade protects women’s right to have an abortion. However, more than a dozen states now ban them after 20 weeks.

Franks' bill enjoyed the support of fellow conservatives in the GOP conference and from the influential Susan B. Anthony List pro-life group.

However, the bill needs the unlikely support of at least eight Democrats to pass in the narrowly GOP-controlled Senate.

South Carolina GOP Sen. Lindsey Graham has companion legislation that could be introduced as early as Tuesday, a congressional source told Fox News.