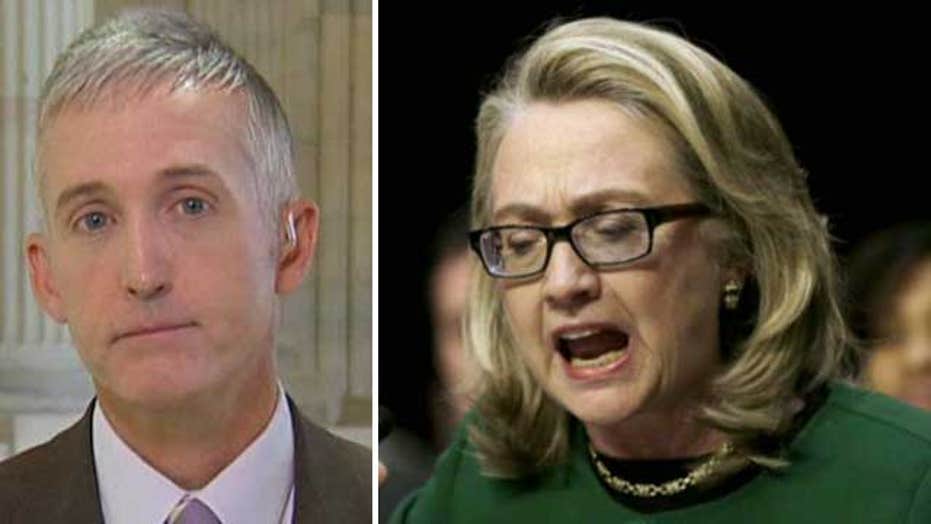 The State Department's investigation into the Benghazi terror attack – put forth by the White House as the final word on the incident -- is deeply flawed, according to the chairman of the House Oversight and Government Reform Committee.

Darrell Issa of California told Fox News in an exclusive interview his panel will not hesitate to recall the most senior witnesses who have testified about the Sep.11, 2012 attack, including former Secretary of State Hillary Clinton.

"We can certainly have Mrs. Clinton back,"  Issa said.  "We want to be respectful of her time, so getting to the facts, including people below her, first is critical."

The comments come ahead of a hearing on Wednesday. The Republican staff report presented to Issa, first reported Sunday by Fox News, alleges that the State Department's investigation, known as the Accountability Review Board or ARB, let senior State Department officials off the hook. They included Undersecretary for Management Patrick Kennedy, who signed a December 2011 "action memo" green lighting the Benghazi post with substandard security.

According to witness testimony before Issa’s committee, Clinton, who has so far escaped blame for the attack, wanted Benghazi to be a permanent operation.

"If he (Kennedy) doesn't want to tell us why people above him knew and allowed it, then all we can assume is that he kept it to himself," Issa said.

On Wednesday, Kennedy will be the star witness at the House Foreign Affairs Committee hearing on Benghazi, where he is expected to face aggressive questioning on whether he or Clinton were responsible for the policy decisions that created what critics have called "a death trap."

On Thursday, the co-chairs of the State Department investigation will testify before the House Oversight Committee.

The senior Democrat on the committee, Elijah Cummings of Maryland, told Fox News in a written statement that the staff report was not a committee report that reflected the members' views, adding  "...Republicans have politicized the investigation by engaging in a systematic effort to launch unsubstantiated accusations against the Pentagon, the State Department, the President, and now the ARB itself. "

"I'm not going to discuss internal deliberations as you know, from the podium," spokeswoman Jen Psaki said at a press briefing.  "But it is important to note that Undersecretary Kennedy was thoroughly interviewed by the ARB, testified for two congressional hearings, provided more than 20 briefings to members and staff. As he testified under oath, he was not involved in the day-to-day decision making on security in Benghazi."

In June, when Fox News first asked about the December 2011 "action memo" signed by Kennedy --  former diplomats say it would have typically required prior approval from Clinton or her deputy -  Psaki tried to dismiss the document's significance by claiming the ARB had thoroughly investigated it.

According to committee depositions, the Republican staff report found the ARB sought to affix blame at the lowest level possible.