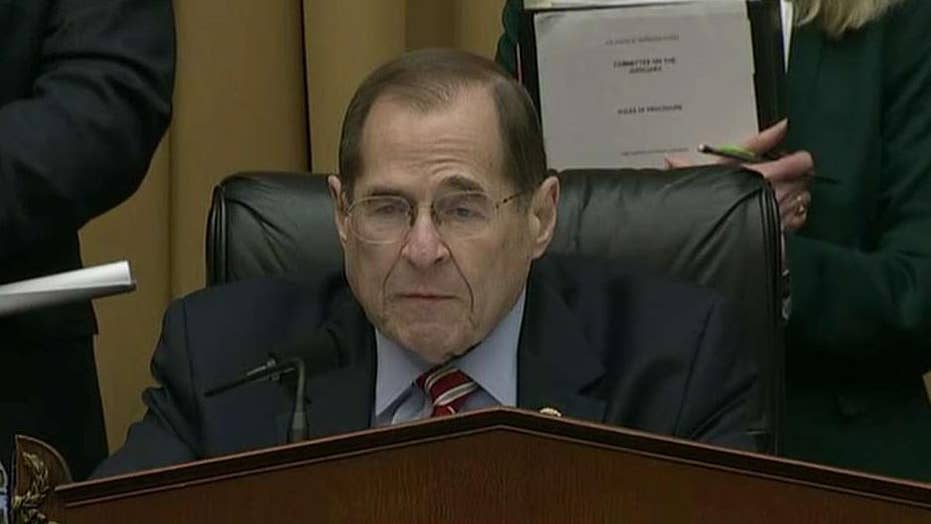 The authorization of subpoenas gives Democrats on the committee the option to issue them; chief intelligence correspondent Catherine Herridge reports.

The House Judiciary Committee voted along party lines Wednesday to authorize subpoenas for Special Counsel Robert Mueller’s full report after the Justice Department missed a Democrat-imposed deadline, in a major escalation of the battle between Congress and the Trump administration over access to underlying documents and evidence from the Russia probe.

The vote was 24-17, with all Democrats supporting and all Republicans opposed. The authorization of subpoenas does not mean the committee will issue them but gives Democrats on the panel the option to do so. Republicans fumed over the move, accusing their counterparts of "political theater" since the DOJ has already pledged to cooperate.

"The Trump administration has an idea. They want to redact the Mueller report before they provide it to Congress. The Department of Justice says the proposal is a means to protect sensitive information that would not ordinarily be made part of the record," he said Wednesday. "But we have reason to suspect this administration’s motives."

While a memo from Barr on the report said Mueller found no evidence of collusion with Russia, the AG also said the investigation did not reach a conclusion on whether President Trump obstructed justice.

"The Mueller report probably isn’t the 'total exoneration' the president claims it to be," Nadler said. "And, in any event, this committee has a job to do. The Constitution charges Congress with holding the president accountable for alleged official misconduct.  That job requires us to evaluate the evidence for ourselves—not the attorney general’s summary, not a substantially redacted synopsis, but the full report and the underlying evidence."

Nadler cited past special counsel investigations, including Watergate and the Ken Starr probe into former President Bill Clinton, noting that those materials were turned over to Congress.

But committee Ranking Member Doug Collins, R-Ga., fired back at Nadler, noting that authorizing subpoenas, and threatening to use them, "is confusing since the attorney general is doing exactly what he said he would be doing--making as much of the report public as possible under federal law and department policy."

"This is hope against hope that we're going to find something," Collins said. "This committee is better than this. Why are we here doing preemptive subpoenas?"

Last week, Barr announced that the Justice Department and the special counsel were “well along in the process of identifying and redacting” sensitive material in the more than 300-page report and would likely have it to Congress by mid-April, “if not sooner.”

But Democrats, upon the release of Barr's summary of the Mueller report, had set a deadline of April 2 for the full report to be released to Congress and to the public. That deadline was missed.

Despite the demands from House Democrats, Barr has indicated he does plan on sharing much of the report itself, noting that, with the help of the special counsel’s office, the Justice Department is reviewing material that “by law cannot be made public” -- covering “material the intelligence community identifies as potentially compromising sensitive sources and methods; material that could affect ongoing matters, including those that the Special Counsel has referred to other Department offices; and information that would unduly infringe on the personal privacy and reputational interests of peripheral third parties.”

Barr released his summary of Mueller's report last week, stating that the special counsel found no evidence of collusion between members of the Trump campaign and Russia during the 2016 presidential election. The special counsel was also reviewing whether the president had obstructed justice in any way, but ultimately did not come to a conclusion on that issue. Barr and Deputy Attorney General Rod Rosenstein, though, said the evidence was “not sufficient to establish that the President committed an obstruction-of-justice offense.”

Meanwhile, Nadler's committee is also leading its own Trump-focused investigation, which was announced last month. Nadler and the Democrats said they are probing “alleged obstruction of justice, public corruption, and other abuses of power by President Trump." As part of that probe, Nadler has requested documents from 81 individuals and entities connected to the president.