The question of slavery reparations for black Americans was the subject of a fiery and emotional House Judiciary Committee hearing Wednesday as Democrats called for measures to address America’s “original sin” -- while Republicans described such payments as an “injustice” and “almost certainly unconstitutional.”

The Constitution, Civil Rights and Civil Liberties subcommittee held the hearing on H.R. 40 -- a bill by Rep. Sheila Jackson-Lee, D-Texas, to set up a commission to study and develop a response to the question of reparations for slavery.

AS DEMOCRATS DEBATE REPARATIONS FOR SLAVERY, POLLS SUGGEST AMERICANS ARE NOT CONVINCED

Democrats such as former President Barack Obama and 2016 presidential candidate Hillary Clinton opposed such a costly plan in the past. But amid a steady shift in the party to the left, the issue has been given new life with endorsements from 2020 hopefuls and others -- though details remain vague as to what form such reparations should take, with estimates for a controversial direct payment to slave descendants running into the trillions.

“The role of the federal government in supporting the institution of slavery and subsequent discrimination directed against blacks is an injustice that must be formally acknowledged and addressed,” Jackson-Lee said.

"I just simply ask: Why not and why not now?" she said.

Sen. Cory Booker, D-N.J., who is running for president and has introduced a version of Jackson-Lee’s bill in the Senate, said it is wrong to present the issue as one American writing a check for another, and called on lawmakers to deal with what he said is continued racism in America.

Citing racial disparities on issues such as health and education, he said America has a criminal justice system “that is indeed a form of new Jim Crow.”

“And so we as a nation have not yet truly acknowledged and grappled with racism and white supremacy that has tainted this country's founding and continues to persist in those deep racial disparities and inequalities today,” he said.

Republicans, meanwhile, recognized the horrors of slavery but said that reparations were not the way forward. Congressman Mike Johnson, R-La., was booed and heckled during his remarks.

“Putting aside the injustice of monetary reparations from current taxpayers for the sins of a small subset of Americans from many generations ago, the fair distribution of reparations would be nearly impossible when one considers the complexity of the American struggle to abolish slavery,” he said.

He quoted a former NAACP assistant director in calling reparations “an illogical diversionary and paltry way out for guilt-ridden whites” -- and was booed for saying such measures would “almost certainly be unconstitutional on their face.”

His remarks echo those of Senate Majority Leader Mitch McConnell, R-Ky., who said Tuesday he didn’t agree with plans for reparations.

At another point in the hearing, Texas Rep. Louie Gohmert accused Democrats of having racists in the ranks decades ago and added: "It is important that we know our history and we not punish people for the sins of their predecessors in the Democratic Party." At that point someone in the audience shouted out: "You lie."

Activist and actor Danny Glover testified at the hearing, as did author Ta-Nehisi Coates, who wrote an influential 2014 essay on the subject and criticized McConnell by name in Wednesday’s hearing. He said that America was paying out pensions to heirs of Civil War veterans into this century, and still honors hundred-year-old treaties.

“Many of us would love to be taxed for the things we are solely and individually responsible for, but we are American citizens and thus bound to a collective enterprise that extends beyond our individual and personal reach,” he said.

But Quilette writer Coleman Hughes said that while he believed the failure to pay reparations directly to freed slaves after the Civil War to be "one of the greatest injustices ever perpetrated by the U.S. government," he asked whether "our desire to fix the past compromises our ability to fix the present."

"Black people don't need another apology, we need safer neighborhoods and better schools, we need a less punitive criminal justice system, we need affordable health care and none of these things can be achieved with reparations for slavery," he said, to some boos from onlookers.

"If we were to pay reparations today, we would only divide the country further, making it harder to build the political coalitions required to solve the problems facing black people today."

When he finished his testimony, Rep. Steve Cohen, D-Tenn., told boo-ers to "chill" and, but appeared to show his own irritation at some of Hughes' remarks when he said that the witness was "presumptive, but he still had a right to speak." 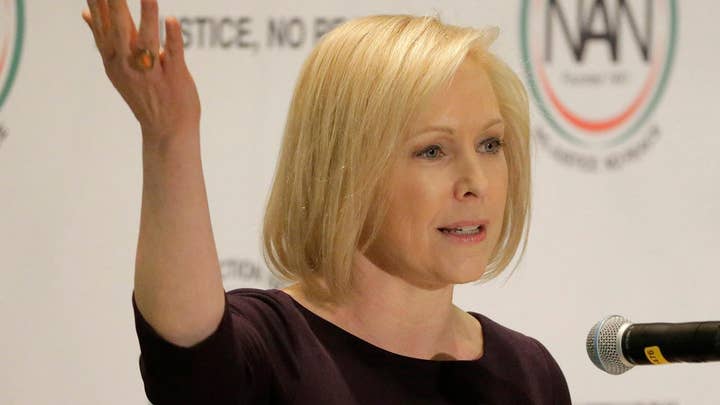 Meanwhile, former NFL player and conservative author Burgess Owens pointed to the Democratic Party as historically responsible for injustices against black Americans, from slavery to the Ku Klux Klan to the literacy rates for black Americans in Democratic states and cities.

"How about the Democratic Party pay for all the misery brought to my race, and those who after they learn our history decide to stay there ... and every white American, Republican or Democrat that feels guilty because of their white skin should need to pony up also -- that way we can get past this reparation and recognize that this country has given us greatness," he said.

Amid the back and forth on whether reparations should be considered, there were scant details on what form such a package would take. Democrats brushed off the idea that such a payment would be a direct monetary payment.

This echoes proposals by top 2020 Democrats, who have been vague about the form reparations would take. Sen. Kamala Harris, D-Calif., suggested to The Grio in February that it could include a generic tax credit to families making under $100,000 -- a much less controversial proposal.

Sen. Elizabeth Warren, D-Mass., meanwhile, has gone a step further and said that Native Americans should be “part of the conversation.”

The caution about specific cash payments from Democrats reflects an opposition to such measures from the public-at-large. The New York Times cited estimates by experts that said that reparation policies could cost several trillion dollars.