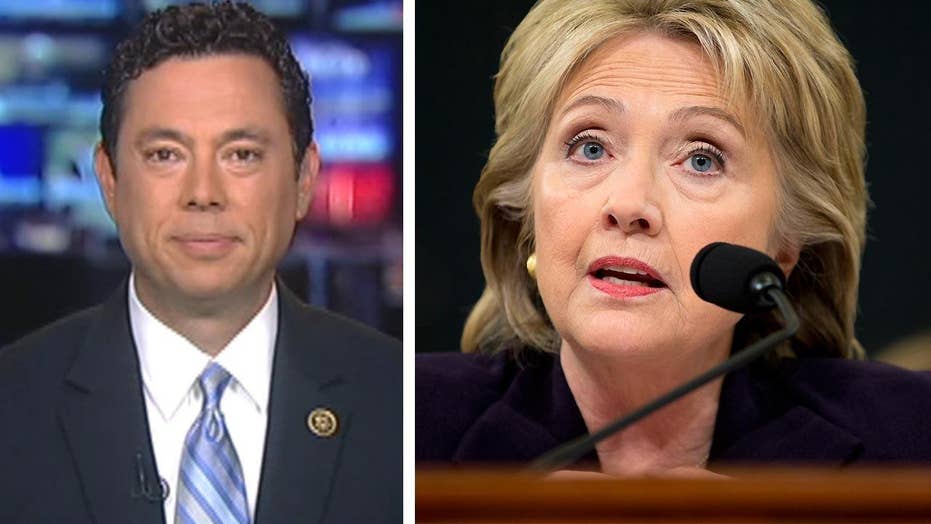 Chaffetz asks FBI to investigate if Clinton lied under oath

Rep. Jason Chaffetz, R-Utah, speaks out on 'The Kelly File' about how the former secretary of state handled classified information

House Republicans asked the U.S. Attorney for the District of Columbia on Monday to investigate Hillary Clinton over her private email server while serving as secretary of state and determine whether she lied to Congress.

Reps. Jason Chaffetz, R-Utah, chairman of the Oversight panel, and Bob Goodlatte, R-Va., head of the Judiciary Committee, said in a letter that "evidence collected by the FBI during its investigation of Secretary Clinton's use of a personal email system appears to directly contradict several aspects of her sworn testimony."

"In light of those contradictions, the department should investigate and determine whether to prosecute Secretary Clinton for violating statutes that prohibit perjury and false statements to Congress, or any other relevant statutes," the two congressmen wrote.

Republicans have been furious that the FBI decided last week against pressing charges against Clinton over her handling of classified information when she relied on a private email server for government business during her tenure as secretary of state.

Republicans since have vowed to press ahead against the Democratic presidential candidate. In their criminal referral, the lawmakers' letter asks Attorney Channing D. Phillips to investigate.

Last October, in testimony to the House Benghazi panel, Clinton said she never sent or received emails marked as classified when she served as secretary of state. She also has said she only used one mobile device for emails and turned over all her work-related emails to the State Department.

FBI Director James Comey said she had multiple devices and investigators found thousands of work-related emails that had not been turned over, telling Congress last week that three of her emails carried classified markings.

Clinton said last week that she exchanged emails with about 300 people, mostly at the State Department, who were experienced with handling classified information.

"They did not believe that (material in the emails) was classified, and I did not have a basis for second-guessing their conclusion," Clinton said in an interview with CNN. "I have no reason to believe they were careless."

The two congressmen also call in their letter for Comey to answer a number of questions hovering over the FBI’s conclusion regarding its investigation and how his definition of Clinton’s actions, “extreme carelessness,” is not synonymous with “gross negligence.”

Rep. Elijah Cummings of Maryland, the top Democrat on the Oversight committee, said in response to the criminal referral that "Republicans are so frustrated with the FBI's unanimous decision that they are now completely unloading on Secretary Clinton with everything they've got -- right before the presidential conventions."

The GOP convention begins July 18. The Democratic convention is a week later.

Referrals from Congress don't automatically result in full-fledged investigations, but they have spurred some notable criminal probes and indictments.

Former baseball pitcher Roger Clemens was indicted in 2010 on charges that he lied to Congress, though he was later acquitted, and the Justice Department investigated and later cleared former IRS official Lois Lerner following a referral from lawmakers.