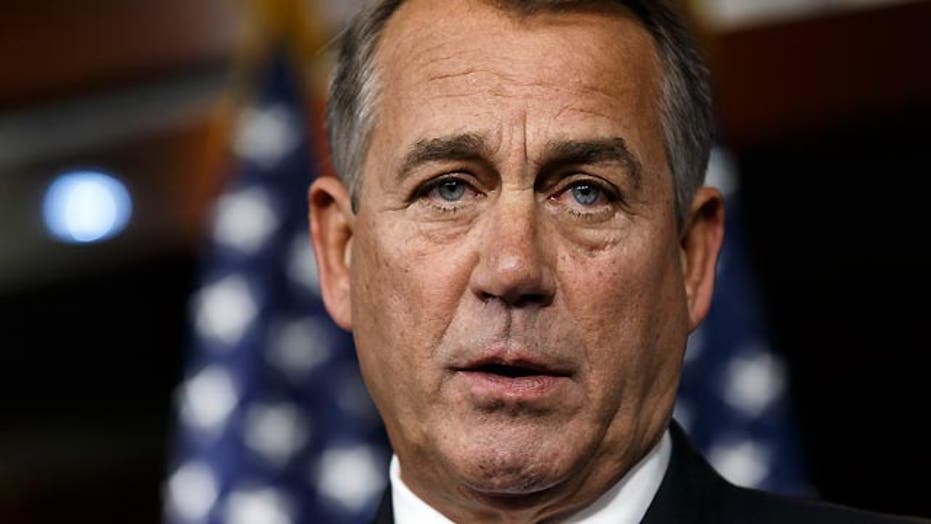 WASHINGTON – The House voted Tuesday to raise the government's borrowing limit, as GOP leaders backed down from a potential confrontation with Democrats by declining to seek any concessions in exchange for the increase.

The debt-ceiling bill passed on a 221-201 vote, and now goes to the Senate for final approval.

The vote comes after Republican leaders backed off their strategy of trying to use the debt limit to force spending cuts or other concessions. In 2011, President Obama yielded to similar demands but has since said he would not negotiate with Republicans over the matter.

House Speaker John Boehner, R-Ohio, swiftly teed up the vote Tuesday after failing to get enough conservative support for a plan that would have tied the debt ceiling measure to one reversing cuts to military pensions. Another failed proposal had tied the debt cap hike to the Keystone pipeline.

The House, as part of a separate bill, nevertheless voted Tuesday to restore full cost of living increases to pension benefits for younger military retirees. The final vote was 326-90.

But Boehner's decision to move ahead on the debt-ceiling legislation without any concessions signals a potentially new approach on these so-called must-pass bills. His party was bruised last year after Republicans tried to extract changes to ObamaCare as part of a budget bill, resulting in a partial government shutdown that lasted until Boehner finally called a relatively clean budget bill to the floor -- which passed on mostly Democratic votes.

The vote Tuesday followed the same pattern. Boehner relied on mostly Democrats to bring the bill over the finish line 193 Democrats voted for the bill, while just 28 Republicans did the same. Boehner and other GOP leaders were among those who voted yes.

Boehner announced before the vote that that was the strategy. "We'll let the Democrats put the votes up. We'll put a minimum number of (GOP) votes up to get it passed," Boehner said. "We'll let his party give him the debt ceiling increase that he wants."

But the vote caused consternation among conservative groups that have pushed Congress -- and particularly Tea Party-aligned lawmakers they helped elect -- to rein in deficit spending, in part by extracting spending cuts wherever possible.

"A clean debt ceiling is a complete capitulation on the Speaker's part and demonstrates that he has lost the ability to lead the House of Representatives, let alone his own party," Jenny Beth Martin, co-founder of Tea Party Patriots, said in a statement.

The measure approved by the House does not raise the debt limit by a set amount but does suspend it through March 15, 2015. That buys the Treasury Department the leeway it needs to borrow money to pay for Social Security checks, payments on government debt and paychecks for federal workers.

The vote, which was originally scheduled for Wednesday, was moved up a day because of a winter storm headed toward the East Coast.

Conservative lawmakers, too, were angered by the leadership's approach.

"Right now we've got a debt ceiling bill that increases spending, which is diametrically 180 degrees opposite of what we were battling over just two years ago -- where the question was how much in spending cuts we were going to get," said Rep. Mo Brooks, R-Ala.

Rep. Xavier Becerra, D-Ca., described the nature of the minority taking a leadership role in the vote as feeling "like Alice in Wonderland. Totally upside down.

“The majority is supposed to be the party that moves us forward, because they run the ship," he said.

Boehner put the best face on his inability to win over his conservative wing, saying, "Understand, it's the president driving up the debt and the president wanting to do nothing about the debt that's occurring, will not engage in our long term spending problem. And so let his party give him the debt ceiling increase that he wants."

"Such large and growing federal debt could have serious negative consequences, including restraining economic growth in the long term, giving policy makers less flexibility to respond to unexpected challenges, and eventually increasing the risk of a fiscal crisis," he said.

On the Senate side, Majority Leader Harry Reid praised Boehner's decision but threw a barb at House conservatives, saying, "I put nothing past the Tea Party-driven Republican Congress."

Tuesday's developments amount to a blow for a party that has sought to use must-pass debt ceiling measures as leverage to force spending cuts on Democrats. Republicans won more than $2 trillion in spending cuts in a 2011 showdown, but gave Obama two debt limit increases last year with only modest add-ons.

Time was running out for lawmakers to act to lift the debt limit. Treasury Secretary Jacob Lew told lawmakers last week that Treasury will exhaust by Feb. 27 its ability to employ accounting maneuvers to borrow to pay its bills.

Lew announced he would suspend payments to these two pension funds and would also draw down investments made in the funds. Previous Treasury secretaries have also employed this bookkeeping maneuver. Once Congress approves a new debt ceiling, the Treasury makes the funds whole by replacing the withdrawn funds and lost interest earnings.