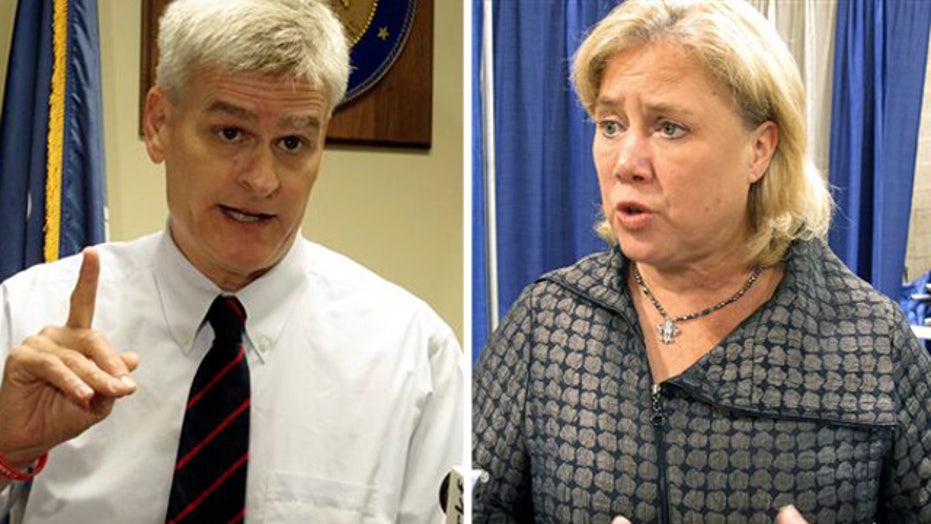 Can GOP take control of Senate?

BATON ROUGE, La. – They like their gumbo and their politics spicy in Louisiana, and this year's U.S. Senate race may be the hottest in years.

Democratic Sen. Mary Landrieu, who is vying for a fourth term, is facing a stiff Republican challenge from Rep. Bill Cassidy in the fall. But unlike most other close races this year, this one threatens to leave majority control of the Senate in limbo until the first week of December.

That's because of the way the state's election system is structured. Louisiana has what's known as a "jungle primary" system -- in this case, it means candidates of all parties will appear on the same ballot on Nov. 4.

If nobody clears 50 percent on Election Day, the top two vote-getters will proceed to a Dec. 6 runoff.

The course of the race so far suggests that's a possibility.

Landrieu has won in runoffs in two of her three Senate elections, and this time President Obama's popularity is hurting Landrieu in the polls, keeping her in a close race.

The three-term senator backs ObamaCare, but emphasizes her differences with the president when it comes to this red state's energy industries, which includes the issue of the Keystone XL pipeline.

"I am such a strong supporter of the Keystone pipeline, and have been for many years," said Landrieu, who is chairwoman of the powerful Senate energy committee and promises to use her position to bring more jobs to the state.

"It is not my clout. It is Louisiana's clout. Let's not give it up," Landrieu told reporters after officially qualifying for the ballot on Wednesday.

Cassidy, a physician, is in a dead heat in the polls with Landrieu and is accusing her of using the pipeline to get re-elected.

"That's not her top priority," Cassidy said. "Her priority is kind of kowtowing to Senator Reid and President Obama."

Democratic super PACs have pounded Cassidy with $4 million worth of attack ads. Some of them have been deemed inaccurate by independent fact checkers, including one by the Senate Majority Fund, run by Senate Democratic Leader Harry Reid.

Cassidy has voted for Democrats in the past, including former presidential candidates Michael Dukakis in 1988 and Paul Tsongas in 1992.  He also donated to Landrieu in one of her previous campaigns.

The biggest threat to Cassidy in this "jungle primary" system comes from fellow Republican and self-styled Tea Party conservative, retired Air Force Col. Rob Maness who says Cassidy is part of the problem in gridlock-stricken Washington.

"He goes with the leadership all the time," Maness said. "Voters can't trust him."

Cassidy, a two-term member of Congress, turns the insider charge on its head.

"It is Republican so-called conservative groups out of Washington, D.C., who support [Maness]," he said.

"If there's an establishment candidate, it is he, if there is a grassroots candidate, it is me," Cassidy said. "I'm running against Senator Mary Landrieu. That's who this race is about. Look at the polls."

Maness has been slowly gaining in the polls on Cassidy, while Landrieu's overall lead has diminished. Her campaign lately has been dealing with allegations she improperly paid for campaign air travel with taxpayer funds from her U.S. Senate budget.

"The whole airplane issue is just a symptom, if you will, of a Washington, D.C., that lives high on the hog, while taxpayers struggle," Cassidy said.

"It was a mistake, an accounting mistake," explained Landrieu. "It should never have been made, and I have lawyers that are looking at every ... document and will make it fully public in September."