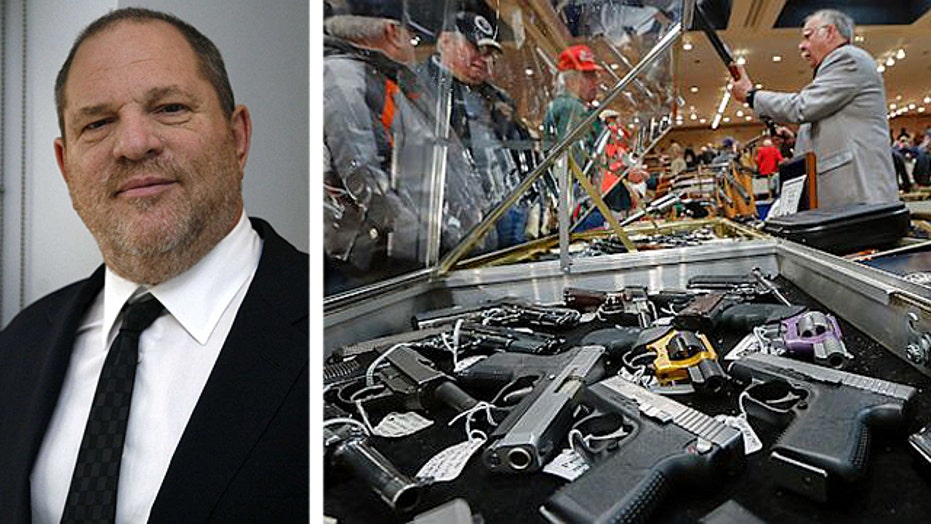 Harvey Weinstein goes after the NRA

Both are playing with political fire, which will delight some partisans and infuriate others — while generating the kind of buzz that boosts the box office.

Stone, who’s no stranger to politically charged films, has just bailed from a biopic about Martin Luther King Jr. after his script rewrite was rejected.

He says on Twitter that “the script dealt w/ issues of adultery, conflicts within the movement, and King’s spiritual transformation into a higher, more radical being.”

But, warns Stone, “I’m told the estate & the ‘respectable’ black community that guard King’s reputation won’t approve it. They suffocate the man & the truth.”

Now whether that’s accurate or not, I can read this two ways. The man who made “Nixon,” “JFK” and “Born on the Fourth of July” wants a warts-and-all portrait that includes the fact that the FBI spied on King when he was with other women. Or he could be contemplating a tabloid approach designed to mar the image of a great civil-rights leader.

Weinstein, the veteran film executive, is making no bones about his politics in taking aim at the NRA.

“They’re going to wish they weren’t alive after I’m done with them,” Weinstein told Howard Stern. Doesn’t exactly sound like he’s looking for a fair and balanced approach, does it?

He added: “I don’t think we need guns in this country, and I hate it, and I think the NRA is a disaster area.” The film, “The Senator’s Wife,” will examine NRA lobbying against gun control after Newtown.

Weinstein, who has Meryl Streep lined up for the lead role, is of course a man who has made plenty of money from films with guns. He told CNN’s Piers Morgan that he’s had a change of heart: “I have to choose movies that aren’t violent or as violent as they used to be.”

Stone and Weinstein are the embodiment of Hollywood liberals, and history has shown that movies can influence the political debate. But these kinds of projects also have a way of riling up the other side. NBC was going to cast Diane Lane in a movie about Hillary Clinton before caving under pressure.

Meanwhile, “Lone Survivor,” a stirring drama based on a book by a Navy SEAL whose buddies were killed in a Taliban ambush, has become a hit, prompting some liberal critics to deride it as excessively violent and glorifying war.

One last entry in the cinematic sweepstakes is “Mitt,” a documentary on his two presidential campaigns that premiered at Sundance the other day. The filmmakers had extraordinary access to Romney and his family.

From the clips I’ve seen, the film by Greg Whiteley shows Romney unplugged, laughing and crying through the highs and lows of the high-stakes contests.

As the New York Times put it: “The documentary offers a more personal, quirky and human side of Mr. Romney than often came through during his campaigns.”

Why didn’t we see that Romney in the past? He told the paper: “It’s one of the challenges of modern politics, which is ‘How do you communicate who the candidate is and what they really believe, in the short time period you have?’ ”