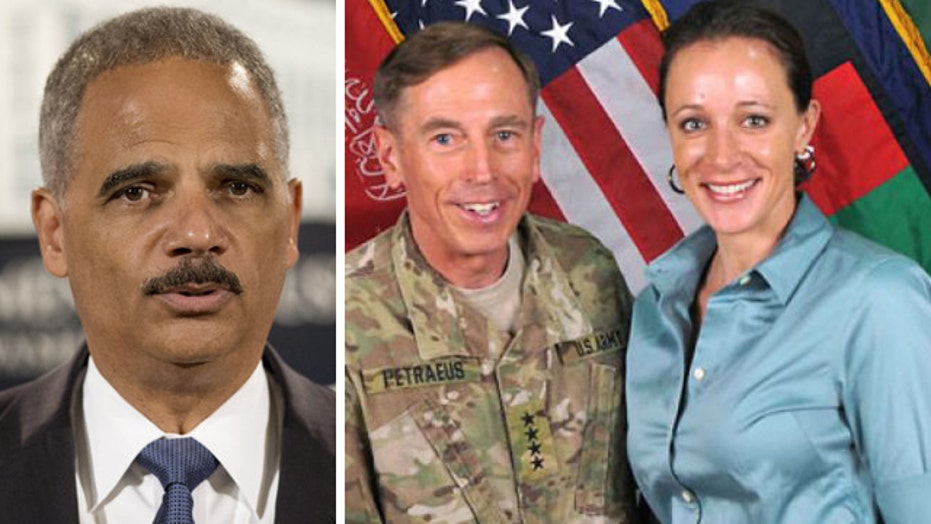 Petraeus resigned from the CIA in 2012 after a federal investigation found he was having an extramarital affair with biographer Paula Broadwell and concluded he gave her classified information.

Holder told ABC’s “This Week” that news reports based on information leaked by anonymous sources are “frequently inaccurate” and assured members of Congress that Petraeus would be treated fairly.

“I share their concern and assure them and the rest of America that any investigation will be done in a fair and appropriate way” said Holder, the country’s top law enforcement official.

Holder, who last year announced he would retire after President Obama found his replacement, did not say whether the Petraeus case would be concluded under him.

The New York Times reported Friday that Justice Department prosecutors and the FBI are recommending the charges against Petraeus -- a retried, four star Army general.

GOP Sens. Lindsey Graham and John McCain acknowledged on Saturday that the facts related to the federal investigation remain unknown, so they cannot comment on the specifics. But they said, “It is clear that this investigation has been grievously mishandled.”

"It is outrageous that the highly confidential and law-enforcement-sensitive recommendation of prosecutors to bring charges against General Petraeus was leaked," Graham, S.C., and McCain, Ariz., also said in a joint statement. "No American deserves such callous treatment, let alone one of America’s finest military leaders.”

They were joined Sunday by Sen. Diane Feinstein, D-Calif., chairwoman of the Senate Intelligence Committee.

“He [Petraeus] made a bad mistake,” Feinstein told Fox News on Sunday. “He lost his job as the CIA director. And at some point enough is enough.”

She also couldn’t comment on an investigation, but called Petraeus a “true patriot” and expressed hope that the Justice Department would not bring charges.

Petraeus has denied giving Broadwell classified information and reportedly is not interested in a plea deal.

North Carolina GOP Sen. Richard Burr told ABC on Sunday that he trusts the FBI in doing its investigation. However, he raised the issue of Obama saying when announcing Petraeus’ resignation that his actions did not reach the level of putting national security in jeopardy.

“The burden of proof is on the bureau and Justice Department … to present to Americans where [the breach] was and why the president was wrong,” Burr said.