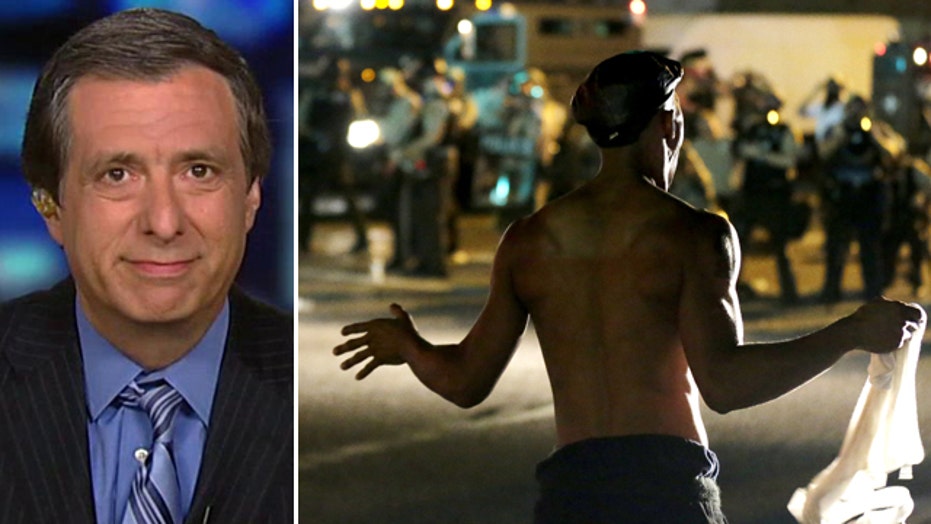 The images of police in riot gear armed with heavy weaponry and tanks has at times become the alarming backdrop for the Ferguson story, with pictures that television can’t resist.

In these kinds of tinderbox situations, the right generally lines up behind the police and the left pounces on the police state.

But this time is different. A split is emerging among conservative commentators and politicians, some of whom are troubled by the way local police departments have bulked up until they resemble military units.

The tragedy of a white police officer shooting an unarmed black teenager—at least six times, we now know from a private autopsy on Michael Brown first leaked to the New York Times—was followed by a series of protests that turned violent. In the early days, the local force was widely viewed as overreacting, which is why Missouri’s governor installed a new commander who adopted a softer tone. The looting and anarchy that followed a curfew imposed last weekend shifted the spotlight from the police response to the anger-fueled agitators. And that will take on a new layer with Gov. Jay Nixon yesterday calling out the National Guard.

President Obama tackled the issue at a news conference yesterday. While some of the post-9/11 buildup to combat potential terrorism has been helpful, he said, "I think it’s probably useful for us to review how the funding has gone, how local law enforcement has used grant dollars, to make sure that what they’re purchasing is stuff that they actually need. Because, you know, there is a big difference between our military and our local law enforcement, and we don’t want those lines blurred." Obama expressed his concern without taking a strong stand, settling for a "review."

Crime has been a conservative issue since the days that Richard Nixon ran on “law and order” and some radicals called police officers pigs. When police conduct has been at issue—Birmingham in 1963, Chicago in 1968, Los Angeles and Rodney King in 1992—the fiery criticism has come from the left.

The most striking development in the conservative movement these days is that Big Government can also include law enforcement, its growth fueled by federal largesse.

Rand Paul, the potential presidential candidate with a strong libertarian streak, registered his objections in a Time piece:

“Big government has been at the heart of the problem,” the Kentucky senator says. “Washington has incentivized the militarization of local police precincts by using federal dollars to help municipal governments build what are essentially small armies—where police departments compete to acquire military gear that goes far beyond what most of Americans think of as law enforcement…

“When you couple this militarization of law enforcement with an erosion of civil liberties and due process that allows the police to become judge and jury—national security letters, no-knock searches, broad general warrants, pre-conviction forfeiture—we begin to have a very serious problem on our hands.

“Given these developments, it is almost impossible for many Americans not to feel like their government is targeting them.”

“In the name of local preparedness, Washington has been bestowing antiterror grants and Pentagon surplus on communities barely touched by major crime, let alone by terrorism. Tanks and aircraft, helmets and armor, guns and grenade launchers have flowed to police departments from Des Moines (home of two $180,000 bomb-disarming robots) to Keene, N.H. (population 23,000, murder rate infinitesimal and the proud custodian of an armored BearCat)…

“And it’s a path to potential disaster, for cops and citizens alike. The ‘S’ in SWAT was there for a reason: Militarized tactics that are potentially useful in specialized circumstances — like firefights with suicidal terrorist groups — can be counterproductive when employed for crowd-control purposes by rank-and-file cops.”

One of the staunchest conservatives around, RedState founder Erick Erickson, takes aim at local police:

“Police do a good and necessary job. But if power corrupts men and absolute power corrupts absolutely, we should be wary of putting our neighborhood man in blue in camouflage, a helmet, and an AR-15 inside an armored personnel carrier except in the most serious of circumstances…

“No conservative is saying police do not need to be able to outshoot and out arm the bad guys. But many of us are saying police are more quickly than ever before resorting to playing soldier when they could accomplish the same as just a policeman.”

Not all conservative subscribe to this view, of course. But there is a healthy debate taking shape, driven by the right and the firepower on display in a small Missouri town.