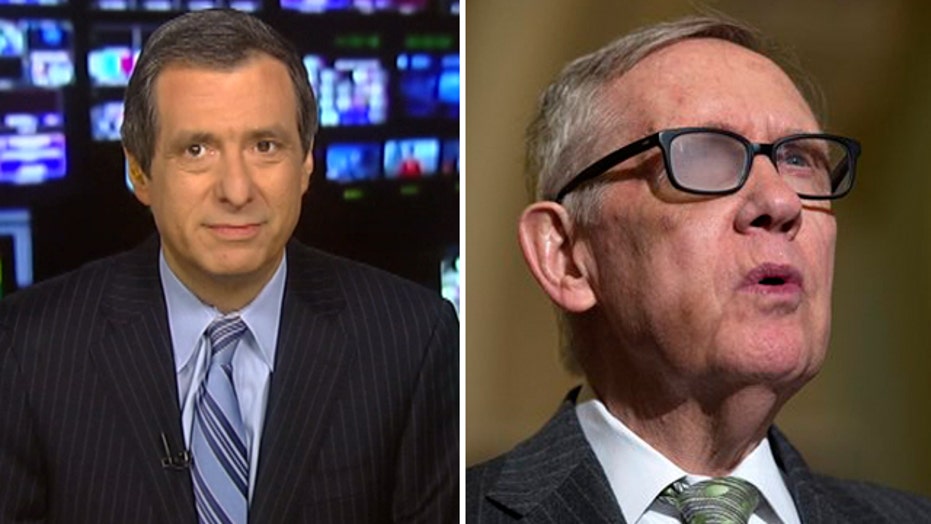 Harry Reid has just pulled off a triple coup.

He got to make his own retirement announcement without having it leak in advance. He essentially got to anoint his successor. And despite years as a bare-knuckled partisan warrior who makes incendiary comments about the other side, he’s gotten a pretty nice media sendoff.

Usually when a 75-year-old lawmaker gets knocked out of the majority and then suffers a terrible accident, there’s all kinds of media speculation about whether he’ll hang it up. But who ever thought the Nevada Democrat would relinquish power voluntarily?

I remember once hearing Reid say that he has no hobbies, that politics is his entire life. The guy was once a boxer and never lost his pugilistic approach to just about everything. You could see that he wasn’t a charming guy, wasn’t a warm guy, had little patience for small talk, but loved to cut deals and plot parliamentary strategy.

He ran the Senate with an iron fist, often refusing to allow Republicans to offer amendments. If you were a Democrat, you were glad he was sticking it to the other side. If you were a Republican, you felt he was destroying the institution of the Senate.

His party got clobbered in 2014, and suddenly the power shifted to Mitch McConnell. Then Reid smashed up his face in an unfortunate treadmill accident.

The minority leader also figured out how to hand his crown to Chuck Schumer (making it even more amazing that the maneuvering didn’t leak). Rather than waiting a couple of days for media chatter to build over who might succeed him, Reid had his spokesman tell reporters he favored the New York senator, then endorsed Schumer outright. As if on cue, Reid’s deputy, Dick Durbin, who might have been expected to fight for the top spot, said he’d back Schumer.

Of course, none of this happens until after Reid retires at the end of 2016, but the press will now treat Schumer as the leader-in-waiting.

The Atlantic agrees that nobody ever thought Reid would hang it up:

“To everyone who knew him, Reid seemed like one of those creatures of the Capitol who would only ever leave the Senate feet first…

“Reid has always been a paradoxical figure. His public image, if he has one, is largely as a shambling bumbler, pallid and reed-voiced and prone to verbal gaffes, like the time he praised Barack Obama for his lack of ‘negro dialect’ or called George W. Bush ‘a loser’…

“But Reid’s image among political insiders is different: He is known as a canny behind-the-scenes mastermind, a political puppeteer whose micromanagement knows no bounds.”

Only later does the piece say: “Reid bears some of the blame for the increasing partisanship and gridlock in Congress, and his outbursts were sometimes over the top.”

“As leader, Reid developed a no-nonsense, hard-ball style that came to define his stewardship. He muscled through Senate passage of the Affordable Care Act on Christmas Eve in 2009 on a straight party-line vote, when his party controlled 60 seats, enough to overcome a GOP filibuster. In 2013, Reid took the unprecedented step of invoking the so-called ‘nuclear option,’ a move that gutted filibuster rules for presidential nominations that critics said altered the deliberative nature of the body.”

Only then does Politico note that Reid’s stock had been dropping:

“After losing the Senate majority last year, a number of Democrats blamed his tight grip on the amendment process, and the lack of Senate votes, for being a liability in the midterm elections that led to the loss of nine Democratic seats. For the first time in his career, Reid faced open dissension among senators about returning to the Democratic leadership post. As he ran for minority leader unopposed, Reid lost at least six votes from his colleagues, a sign that he was for the first time vulnerable in the top post.”

Which may help explain why Reid decided to throw in the towel while he still had the title.

On the conservative side, Red State founder Erick Erickson ticks off Reid’s sins:

“Faced with Republican obstruction over Obama judiciary nominees, Harry Reid blew up the filibuster. Faced with Republican obstruction against ObamaCare, Harry Reid used the reconciliation process — a budgeting process — to pass ObamaCare. On the campaign trail, Harry Reid made stuff up, using his vantage point as Majority Leader to get media credibility. Who remembers his nonsense about Mitt Romney’s taxes?” (Reid falsely claimed he had information that Romney hadn’t paid any taxes for years.)

But then Erickson says: “The GOP could learn a lot from him. The Republicans try to get through a week without blowing themselves up. Reid tries to shape an entire year to make sure the GOP is blown up a month before election day.”

And that’s the bottom line: Even Harry Reid’s fiercest detractors admired his effectiveness.

Footnote: Schumer is well-liked by reporters, but this glowing New York Times piece contains not a syllable of skepticism—perhaps because his ascension would be a “boon” to the state: “New York has never produced a leader of the Senate.”

The Washington Post allows a dissenting note of one half-sentence: “Sometimes dismissed by critics as a motor-mouthed New Yorker with a legendary thirst for self-promotion…”