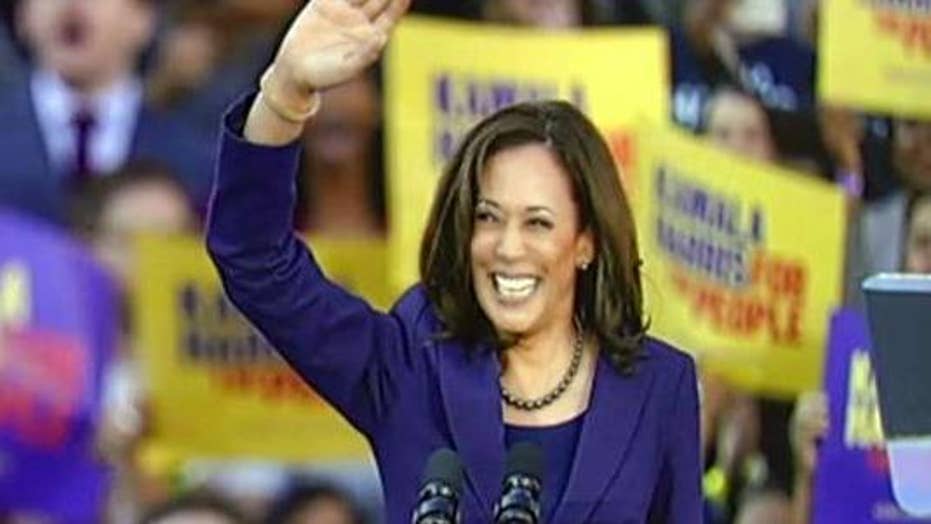 Dana Perino shares the latest Tales from the Trail on 'The Daily Briefing.'

Sen. Kamala Harris wants to give teachers across the country a raise.

In the first major proposal of her presidential campaign, the Democrat from California unveiled a plan on Tuesday to eliminate the teacher pay gap and give the average teacher a $13,500 per year raise.

The price tag for the ambitious plan? $315 billion over 10 years.

“We are not paying our teachers their value,” Harris said in a statement. “Teachers should not have to work two or three jobs to pay the bills. This proposal will lift up teachers and families across America, give every American teacher a raise, and make a much-needed investment in our country’s future.”

Elementary, middle, and high schools obtain most of their funding from local and state governments, with Washington contributing less than 10 percent of funding. But Harris says if elected to the White House, she’ll push for an immediate federal investment to provide 10 percent of the funding needed to close the teacher pay gap between teachers and professional workers with similar college degrees.

Harris is calling for the Department of Education to work with the states to set a base salary goal for entry-level teachers, with more advanced teachers seeing increases based on their years in the classroom. The proposal also includes additional federal funding for the country’s highest-need schools and a multi-billion-dollar investment in programs that the Harris campaign says “elevate the teaching profession and support principals and other school leaders.”

The campaign explained that the $315 billion plan would be paid  “by strengthening the estate tax and cracking down on loopholes that let the very wealthiest, with estates worth multiple millions or billions of dollars, avoid paying their fair share.”

The Republican National Committee called the plan "another liberal pie-in-the-sky proposal that will never see the light of day."

“With a $315 billion dollar price tag, no real plan to pay for it, and new spending mandates slapped on states, this proposal has big-government written all over it," RNC National Press Secretary Blair Ellis argued.

Calls for increasing teacher pay are nothing new in politics. For decades, school teachers have argued that they’re underpaid and that the schools in which they work are underfunded by state and local governments.

But the issue’s been increasingly in the national spotlight, with some high-profile walkouts over pay over the past year by teachers in more than half a dozen states. And teachers unions traditionally have been key players in Democratic Party politics.

The powerful American Federation of Teachers – which remains neutral in the wide-open race for the Democratic presidential nomination – predictably praised the Harris plan.

Sen. Elizabeth Warren of Massachusetts, a rival for the Democratic presidential nomination, is also pushing for increases in early education teacher pay as part of her plan to provide universal child care.

The average annual salary for a public school teacher during the 2016-2017 academic year was $58,950. That was down slightly from the previous year, according to data from the National Center for Education Statistics.