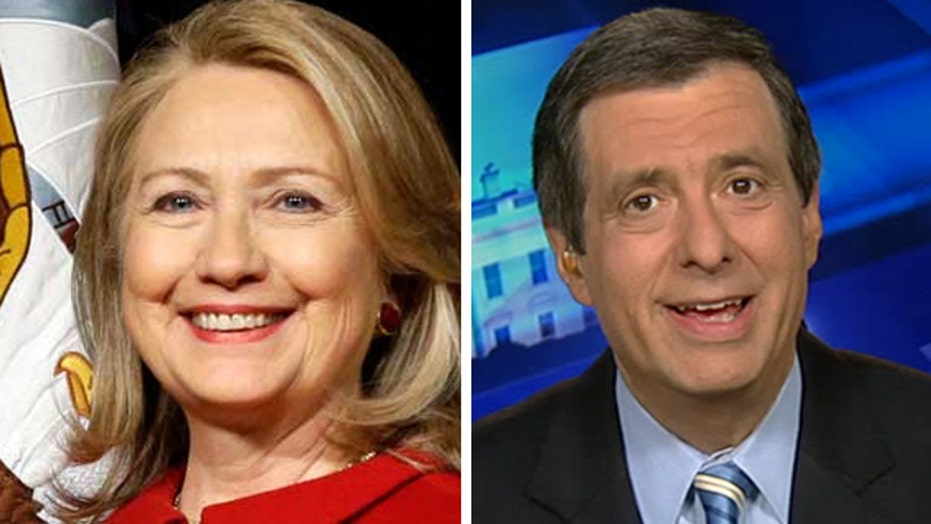 Kurtz: Why Hillary is the Democrats' last hope

The old conventional wisdom on Hillary: Been around forever, out of step with the Democratic Party, inevitable but hardly inspiring.

The new conventional wisdom on Hillary: The Democrats should thank their lucky stars because she’s all that stands between them and political oblivion.

What a difference a midterm debacle makes.

If you think about the Democrats’ outlook without Hillary Clinton, it’s rather sobering. The New Yorker just chatted up three other presidential aspirants: Martin O’Malley, Bernie Sanders and Jim Webb. Ahem. Case closed.

We’ll come back to the also-rans, but there is a danger for the Dems here that extends beyond 2016. To put it bluntly: this team has a very thin bench.

The party has simply atrophied under Barack Obama.

In the speculation sweepstakes, each party usually has up-and-coming governors and senators who could ripen into presidential prospects. But after 2010 and 2014, many of the Democrats who might fall into that category have lost their jobs, or never gotten into office at all.

Statehouses are particularly important because that’s where candidates get executive experience, and four of the five presidents before Obama had been governors. But the GOP just won gubernatorial elections in such blue states as Massachusetts, Maryland and Illinois, along with Florida and Wisconsin.

Andrew Cuomo won reelection in a landslide, but he seems more respected than loved, and has made few moves toward raising his national profile. Jerry Brown also won reelection, but he was the hot young presidential contender back in…1976.

So Hillary’s shadow looms large over the entire party.

“The sooner she drops the standard political pose and exudes genuine feelings, the better a candidate she will be. She is not the Democratic Party’s best hope. She is its only hope.”

Not that Cohen is a huge HRC fan:

“I have grave doubts about Hillary Clinton’s viability. She still has no resounding message, and in an anti-Washington era she is the very personification of the loathed capital city. Her credentials, her experience, her marriage to Bill and her association with President Obama will be used against her. By many measures, she may be the best candidate, but this is a country that punished George W. Bush for an unnecessary war by inexplicably electing him to a second term. He was, as they say, likable.”

Dan Balz, dean of the Washington press corps, takes the longer view in his Post column:

“Over the past six years, the party has been hollowed out.

“The past two midterm elections have been cruel to Democrats, costing them control of the House and now the Senate, and producing a cumulative wipeout in the states. The 2010 and 2014 elections saw the defeat of younger politicians — some in office, others seeking it — who might have become national leaders…

“Think of it this way: If Clinton were to win the presidency and serve two terms, the next opportunity for a new generation of Democrats to compete nationally would not come until 2024. The Democrats could go 16 years between competitive presidential nomination contests, wiping out opportunities for today’s younger generation to define or redefine the party apart from either the Obama or Clinton eras.”

Which brings me to Hillary’s potential rivals.

The New Yorker’s Ryan Lizza chatted them up. O’Malley, Maryland’s outgoing governor, takes a not-so-veiled shot at Hillary on the hustings by saying: “None of our surrogates from the party’s past were able to affect the results of this wave.”

O’Malley knows he has little name recognition: “Seventy or eighty per cent of people want to hear from a new perspective before they make a decision about whether to go with what they know. A person becomes very famous in this country very quickly.”

One plus for O'Malley is that he plays in a rock band. But a big negative is that his lieutenant governor, Anthony Brown, just lost the race to succeed him in a huge upset.

Jim Webb, the former Virginia senator, is 68. He sounds a populist pitch, saying: "There is a big tendency among a lot of Democratic leaders to feed some raw meat to the public on smaller issues that excite them, like the minimum wage, but don’t really address the larger problem. A lot of the Democratic leaders who don’t want to scare away their financial supporters will say we’re going to raise the minimum wage, we’re going do these little things, when in reality we need to say we’re going to fundamentally change the tax code so that you will believe our system is fair.”

The former Navy secretary also raised Iraq—remember, Hillary voted to authorize the war in 2002—by saying “we do not belong as an occupying power in that part of the world. This incredible strategic blunder of invading caused the problems, because it allowed the breakup of Iraq along sectarian lines at the same time that Iran was empowering itself in the region.”

No one can insult Sanders by calling him a socialist: the Vermont senator with the gravelly Brooklyn accent is a socialist. He indirectly invokes the royalty argument against the Clintons:

“We look at the United Kingdom and their queens, their dukes, and whatever else they have, and say, ‘Well, that is a class society, that’s not America.’ Well, guess what? We have more income and wealth inequality in this country than the U.K. and any other major country on earth.”

As for Obama, Sanders boasts that “I have been the most vocal opponent of him in the Democratic caucus…His weakness is that either he is too much tied to the big-money interests, or too quote-unquote nice a guy to be taking on the ruling class.”

So we have these Democrats who are distancing themselves from Obama and casting Hillary as a centrist too cozy with the bankers. But is any of them a convincing presidential candidate?

A strong primary challenge would actually be healthy for the Democratic Party, and the media would lap it up. It would give Hillary someone to vanquish rather than just running against herself. But at the moment, it’s not clear that she’ll have to break a sweat.