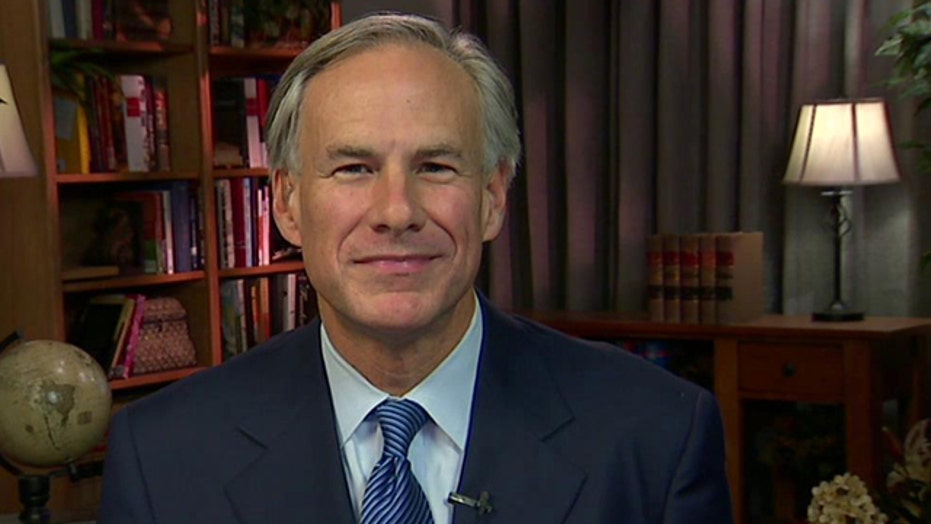 WASHINGTON – Texas Attorney General and GOP gubernatorial candidate Greg Abbott shrugged off a campaign ad by Democrat Wendy Davis invoking the accident that left him paralyzed from the waist down and left him relying on the use of a wheelchair.

"If she wants to attack a guy in a wheelchair, that's her prerogative," Abbott told Fox News' Sean Hannity Monday evening. "As for me, I'm running a different type of campaign ... I will focus on the future of Texas while my opponent continues to attack me."

Davis dug in Monday in the face of heavy criticism, claiming at a Fort Worth news conference that the ad was designed to portray Abbott as someone who worked against the disabled. During her remarks, Davis was flanked by disability rights activists, including two people in wheelchairs.

Asked by a reporter if the ad exploits Abbott’s disability, Davis said, “This ad is about one thing. And one thing only. It’s about Greg Abbott’s hypocrisy.”

Abbott disagreed, telling Hannity, "It shows that her campaign is focused on one thing, and that is attacking me ... I don't think it's going to sell real well, so I'm going to stay focused on the future." The candidate then linked Davis' campaign to President Obama, saying, "Most of what I'm running on is trying to solve the problems he has created, even here in Texas. My opponent is having to run from Barack Obama, and all she can do is attack me."

The ad from Davis has faced bipartisan criticism since its release late last week. Seizing on this, Abbott’s camp on Monday released a compilation of sound bites from political roundtables and panel discussions criticizing Davis’ ad and likening it to a “Hail Mary” pass. The Abbott campaign website likewise is filled with clips of criticism of the ad. The head of the Texas GOP called it "despicable."

The 30-second Davis ad released Friday goes where no campaign ad of hers has gone before. It opens with an image of a wheelchair, and then criticizes Abbott for allegedly not doing enough to help other victims, despite himself receiving a large monetary settlement after a falling branch paralyzed him. It criticizes Abbott, currently the Texas attorney general, for supporting legislation that limits awards on legal settlements and other positions.

The narrator in the ad says, “A tree fell on Greg Abbott. He sued and got millions. Since then, he’s spent his career working against other victims.”

"I expect in campaigns that candidates will run negative and misleading ads; however, I never expected a candidate to use another candidate's physical disability as a prop in an ad or to their advantage," Munisteri said in a statement. "The Wendy Davis ad is easily the most offensive and despicable ad I have seen in my 42 years in politics. ... Using a wheelchair as a prop for political advantage is an affront to all disabled people."

Davis, though, defended the ad.

“In 1984, Greg Abbott sought out and received justice following a horrible injury, rightly so … receiving millions of dollars. And I’m glad, he deserved justice for the terrible tragedy that he endured,” Davis said during the press conference. “But then he turned around and built his career working to deny the very same justice that he received to his fellow Texans rightly seeking it for themselves.”

Davis’ ad is the first by an Abbott opponent to make an issue of his use of a wheelchair, though Abbott’s own ads have drawn attention to his disability.

“Some politicians talk about having a spine of steel. I actually have one,” Abbott said in 2013 when he launched his gubernatorial campaign.

Davis spokesman Zac Patkanas also defended the ad to The Associated Press, calling it "incredibly powerful" and a fair critique of Abbott as a hypocrite when it comes to his personal health versus public policy.