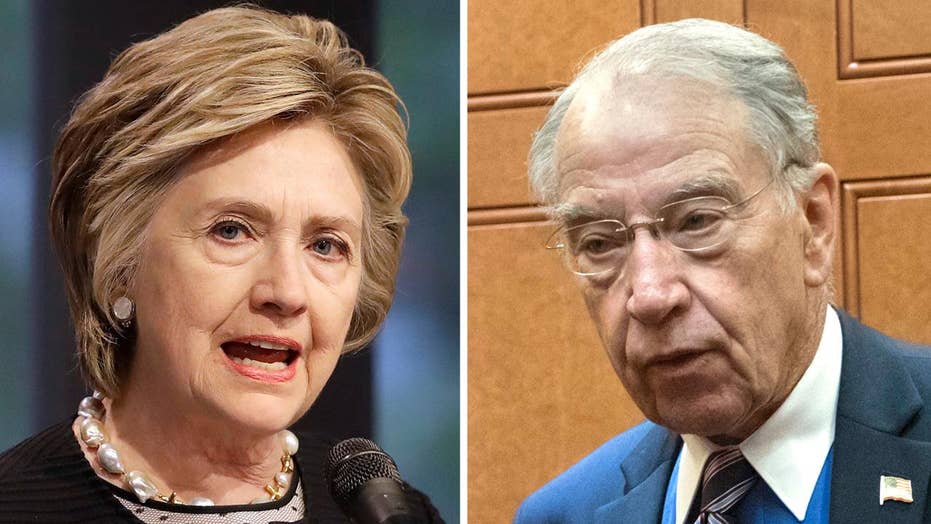 Republican senator from Iowa questions the attorney general about whether the Justice Department has investigated whether Russia compromised Obama administration decisions.

A top Senate Republican is probing potential “conflicts of interest” for Hillary Clinton and the Obama administration regarding the 2010 approval of a controversial uranium deal with a Russian company, amid new details about donations from “interested parties” and an FBI corruption probe involving employees of the same Russian firm.

“This committee has an obligation to get to the bottom of this issue,” Senate Judiciary Committee Chairman Chuck Grassley, R-Iowa, said Wednesday, at the start of a hearing with Attorney General Jeff Sessions.

The Hill reported a day earlier that the FBI had evidence as early as 2009 that Russian operatives used bribes, kickbacks and other dirty tactics to expand Moscow’s atomic energy footprint in the U.S. -- but the Obama administration approved the uranium deal benefiting Moscow anyway.

Grassley on Wednesday released a series of letters he fired off last week to 10 federal agencies, addressing those issues in detail and raising the question of whether the committee that approved the transaction was aware of the FBI probe. The Committee on Foreign Investment in the United States (CFIUS) included then-Secretary of State Hillary Clinton.

“I hear your concerns and they will be reviewed,” Sessions said, without responding directly to a question from Grassley on whether the Justice Department has also probed whether the Russians "compromised" the Obama administration to "smooth the way" for the deal.

“It wouldn’t be appropriate for me to comment on any ongoing investigation,” Sessions said.

The deal in question, which was previously reported, involved the 2010 approval of a partial sale of Canadian mining company Uranium One to Russia’s Rosatom nuclear company. The U.S. was involved because the sale gave the Russians control of part of the uranium supply in the U.S.

Grassley wrote in his letters that he’s not “convinced” by previous “assurances” that there were no unresolved national security concerns. Grassley, in his hearing remarks and letters, raised two key issues.

It had been previously reported that figures tied to the transaction gave donations to Bill Clinton and his family foundation, but Grassley wrote that he has learned additional details about a $500,000 fee the former president got from a Russian investment bank for a June 2010 speech. He wrote that the bank’s senior officers include former Russian intelligence personnel, and sources had described the company as an “extension” of the Russian government.

“Notably, in the same month as the Clinton speech, Uranium One and Rosatom notified CFIUS of the Russian government’s intent to acquire twenty percent of the United States’ uranium assets. The next month, in July 2010, Renaissance Bank reportedly assigned Uranium One a ‘buy’ rating, a move that would principally benefit its Russian investors,” Grassley wrote. “The donations raise concerns about potential conflicts of interest for Secretary Clinton and the Obama administration.”

Further, Grassley raised concerns about the FBI probe into “corruption and extortion” involving employees of a Rosatom subsidiary dating back to 2009 – before the 2010 approval.

As noted in The Hill, the feds did eventually go after Vadim Mikerin, a Russian nuclear industry official, in connection with the investigation. He was later sentenced, in 2015, to 48 months in prison in connection with money laundering allegations.

But Grassley wants to know whether the committee that approved the transaction was aware of the ongoing criminal probe at the time.

“The fact that Rosatom subsidiaries in the United States were under criminal investigation as a result of a U.S. intelligence operation apparently around the time CFIUS approved the Uranium One/Rosatom transaction raises questions about whether that information factored into CFIUS’ decision to approve the transaction,” Grassley wrote.

He said given that the deal resulted in a “Russian government takeover” of a chunk of U.S. uranium mining capacity, “very serious questions remain about the basis for the finding that this transaction did not threaten to impair U.S. national security.”

When details of the Uranium One deal first emerged in 2015, Clinton’s campaign downplayed the allegations.

"No one has produced a shred of evidence that Hillary Clinton ever took action as Secretary of State in order to support the interests of donors to the Clinton Foundation," a spokesman said at the time. "To suggest the State Department, under then-Secretary Clinton, exerted undue influence in the U.S. government's review of the sale of Uranium One is utterly baseless.”