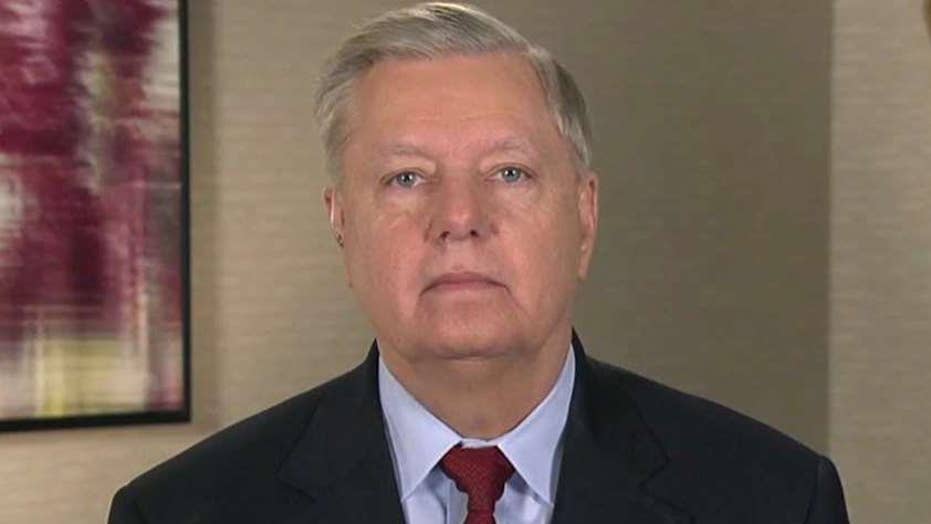 Sen. Lindsey Graham on calls for witnesses in impeachment trial

Sen. Lindsey Graham, R-S.C., announced that his initial plan of a pre-trial dismissal of the impeachment case against President Trump is now unlikely to happen, but he is pushing for the trial to begin and end as quickly as possible.

The Senate trial is set to begin Tuesday. Graham had previously floated the idea that the GOP majority could immediately vote to dismiss the case before hearing any arguments, but now he states that this does not appear to be a possibility given the lack of sufficient Republican support for such action.

“Yeah that’s dead for practical purposes,” Graham told “Fox News Sunday,” explaining, “the idea of dismissing the case early on is not going to happen; we don’t have the votes for that.”

Graham remains confident that Republicans are still united enough to acquit Trump at the conclusion of the trial. How long the trial goes is still up in the air. Graham would neither confirm nor deny reports that Senate Majority Leader Mitch McConnell plans on keeping the Senate in session for 12 hours a day so that House Democrats would be done presenting their arguments Wednesday.

In addition to presenting their arguments, House Democrats want to call witnesses such as former National Security Adviser John Bolton, who did not testify during the House’s impeachment inquiry due to Trump’s claim of executive privilege. Bolton indicated he would comply with a Senate subpoena.

Senators Ted Cruz, R-Texas; Lisa Murkowski, R-Alaska; and Susan Collins, R-Maine, are among a small group of Republicans who have yet to completely shut the door on new witnesses, wanting to hear arguments first. Democrats would need them and at least one more in order to be able to call witnesses, but Graham warned that if they get their wish, the GOP will look to call defense witnesses such as Hunter Biden.

“If we call one witness, we’re going to call all the witnesses,” Graham said.

Personally, Graham said he would rather look into Hunter Biden’s dealings with Ukrainian energy company Burisma Holdings outside of the context of the impeachment trial, and would rather not have any witnesses called during the trial from either side.

“The sooner this is over the better,” he said.

While the trial itself will first begin on Tuesday, both sides have already filed documents presenting arguments.

The Democratic House impeachment managers filed a lengthy brief Saturday night arguing that Trump abused the power of the presidency by using military aid as leverage to pressure Ukraine into announcing investigations into former Vice President Joe Biden and his son Hunter, as well as whether Democrats used Ukraine to interfere in the 2016 election.

They also claim that the president obstructed Congress by blocking key witnesses from testifying during the House’s impeachment inquiry.

In his answer to the impeachment articles -- also filed Saturday -- Trump and his attorneys argued that he committed no wrongdoing when it comes to his dealings with Ukraine, claiming that he did not pressure Ukrainian President Volodydmyr Zelensky into conducting investigations into political rivals, and that the military aid was released without any investigations being announced.

Additionally, Trump argues that the obstruction of Congress charge is meritless because his instructions for witnesses like Bolton not to testify were done under executive privilege, and House Democrats who claimed this was improper never allowed the courts to make a ruling on the matter because they either withdrew subpoenas or opted not to issue them.