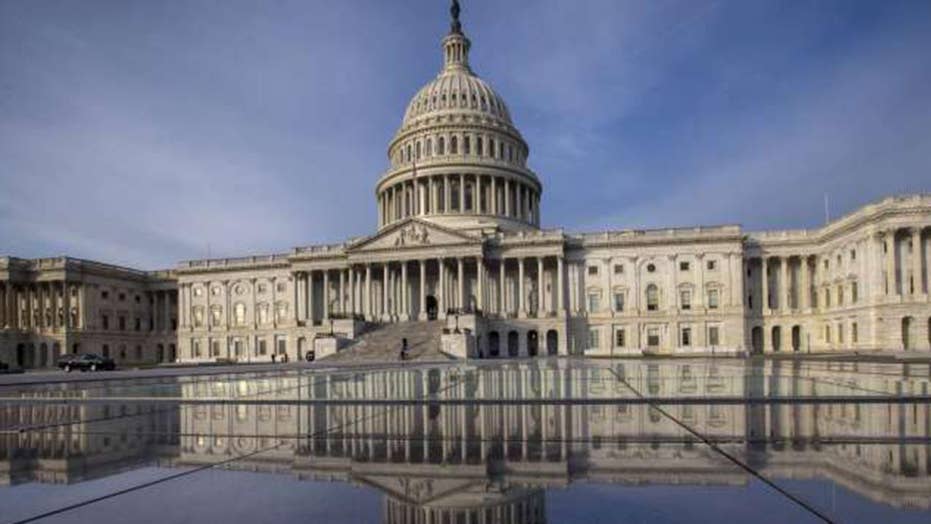 Here we are again.

Lawmakers in Congress have until March 23 to pass a $1.2 trillion spending bill or the government shuts down for the third time this year.

House Republicans have yet to release the text of the bill for lawmakers to examine. But an agreement could be announced as early as Tuesday.

GOP leadership sources say they are trending toward a vote in the House on Thursday. It would then get kicked over to the Senate for a vote.

"We’ve made a lot of progress and gotten a lot of our priorities but we’re still fighting for some items,” AshLee Strong, a spokesman for House Speaker Paul Ryan, said Tuesday.

Rush Limbaugh proposes immigration deal that grants citizenship, but delays the right to vote by '15-25 years;' panel debates the idea.

Still, even conservatives who have complained about spending increases admit they think a deal will ultimately be reached.

“I do believe that we will avoid a shutdown,” Rep. Mark Meadows, R-N.C., the chairman of the House Freedom Caucus, said Monday on Fox News’ "Your World" with Neil Cavuto.

“I'm not in favor of those numbers, because it grows the size of government by 13 percent,” he said. “But those numbers have been agreed to.”

Now, it’s up to both parties to agree on the details.

“It's just moving those around to make sure that Democrats and Republicans are happy with it,” Meadows said. “I do think that, by Friday, there will be a deal there.”

It’s the familiar political fights – including over immigration and health care – that are yet again threatening another shutdown.

"The Democrats do not want to help DACA. Would be so easy to make a deal!" President Trump tweeted Monday night.

Trump killed the Obama-era Deferred Action for Childhood Arrivals program in September, but a court decision has essentially left it in place, for now. DACA offers protections for illegal immigrants brought to the U.S. as children by their parents.

The White House revived the idea of a deal with Democrats over DACA in recent days — offering on Sunday a 30-month extension of DACA protections in exchange for $25 billion for Trump's border wall. But Democrats demanded protections for a broader pool of immigrants than had signed up for DACA, a request denied by GOP negotiators.

Perhaps the most contentious issue is a plan to stabilize ObamaCare insurance markets via cost-sharing reductions. A dispute over abortion seemed likely to scuttle a Senate GOP plan to provide billions in federal subsidies to insurers to help curb health insurance premium increases.

The president, meanwhile, has privately threatened to veto the whole package if a $900 million payment is made on the Hudson River Gateway Project, a priority for Senate Democratic Leader Chuck Schumer, D-N.Y.

The Gateway Project would add an $11 billion rail tunnel under the Hudson River to complement deteriorating, century-old tunnels that are at risk of closing in a few years. The project enjoys bipartisan support among key Appropriations panel negotiators on the omnibus measure who want to get the expensive project on track while their coffers are flush with money.

House and Senate action is needed by midnight March 23 to avert another government shutdown.

Many battles over policy riders were sorted out in marathon negotiations over the weekend. As is typical, many of the policy issues were melting away.

"We've had at least 100 that we've taken out," said Vermont Sen. Patrick Leahy, top Democrat on the Appropriations Committee.