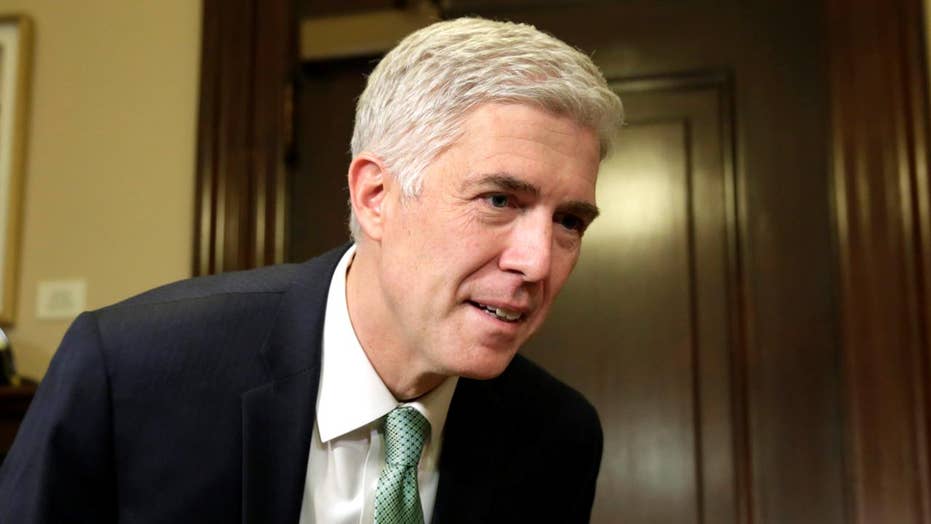 Speculation on how Democrats will handle Gorsuch hearing

In an isolated area of the Eisenhower Executive Office Building in the White House complex, Judge Neil Gorsuch has spent the past few days being put through the rhetorical ringer. For hours on end, he sat alone at a table, peppered with questions about his personal and professional record, all in an effort to see if he would crack under the pressure.

The informal, but intrusive prep sessions are known as "murder boards" for their intensity, designed to simulate what the 49-year-old nominee to the Supreme Court will face in his Senate confirmation hearing starting Monday.

The stakes are enormous, not only for the nominee but also for the man who selected him from a list of 21 potential candidates announced during the presidential campaign. Aides say President Trump hopes a successful confirmation will build momentum for his separate political agenda, and bring a measure of stability and public confidence to what has been a challenging two months in office.

In the broader realm, filling the seat left by the death of Justice Antonin Scalia will ensure the high court keeps a shaky right-leaning majority. And having that fifth conservative vote will help guide the administration as it makes strategic decisions about which high-profile issues to pursue in court-- like immigration, the environment, transgender rights and expanded executive authority.

"It's important Democrats and Republicans not roll over on this pick," said Elizabeth Wydra, president of the left-leaning Constitutional Accountability Center. "The American people want their justices to be an independent check even to the president nominating you, to follow the Constitution, not their own political values."

Gorsuch will face a mixed reception, as Republicans largely welcome the nominee and some Democrats look for a line of attack – though they’ve been distracted lately by other battles over the GOP bid to replace ObamaCare and the president’s disputed claims about “wiretapping.” With their attention elsewhere, Gorsuch has been preparing.

Along with his courtesy visits to more than 70 members of the Senate who will decide his fate, Gorsuch has prepared for the spotlight by reviewing his own record, and enduring those closely guarded mock hearings.

The private rehearsals were coordinated by the White House Counsel's Office, and included more than a dozen participants -- government lawyers, conservative academics, and some of his former law clerks. The goal is to anticipate every possible line of questioning and danger zone -- to give measured answers but not reveal too much.

Sources say Gorsuch has settled in being himself, avoiding unscripted responses that might provide the televised "soundbite" to derail what has so far been a flawless confirmation journey.

Administration officials are privately confident he will shine in the hearings.

Republicans point to Gorsuch's unanimous 2006 confirmation to his appeals court seat as a template to blunt any efforts to filibuster this time.

Sources expect him to repeat in the upcoming hearings what he said 11 years ago, about the kind of judge he considered unacceptable: "Someone who is not willing to listen with an open mind to the arguments of counsel, to his colleagues, to precedent."