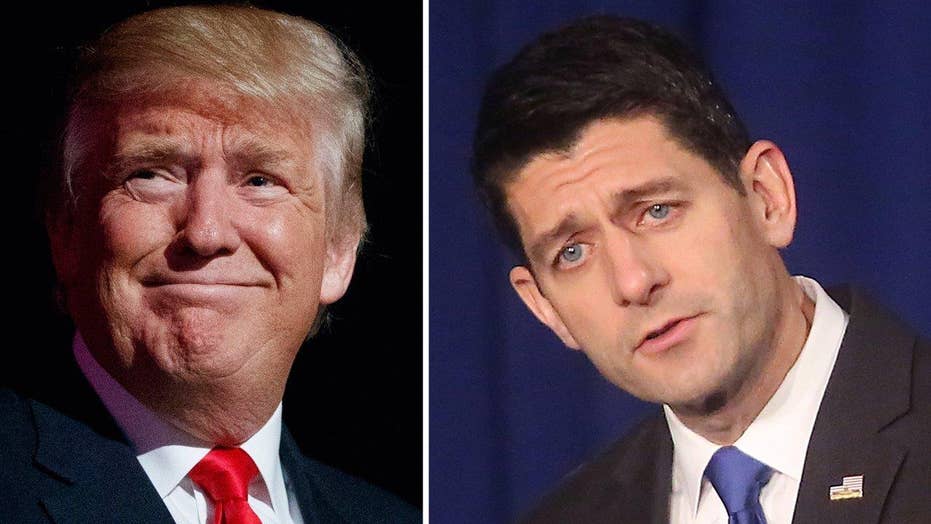 Trump team: Paul Ryan's actions will come back to haunt him

On the roster: GOP’s haunted House - The Rulebook: Egos in balance - Hillary, Trump charity roast turns ugly - Abedin on Hillary’s Morocco speech: She created this mess - What’s in a name?

GOP’S HAUNTED HOUSE
Democrats are feeling so confident about the presidential race that they are casting hungry eyes on congressional races previously thought unwinnable.

Now, let’s be clear that the kind of down-ballot downdraft that would be needed to blow away the Republicans 30-seat advantage in the House isn’t gusting just yet. But the forecast is starting to look a little uncertain.

The same goes for the Senate, where if Democrats are able to tie previously popular GOP incumbents to their party’s nominee closely enough things could start to get weird. And there are signs that Donald Trump’s latest and longest polling trough might soak some of his fellow Republicans, especially in blue-hued swing states.

But Republicans have made a fairly heroic effort of holding on to most of their four-seat Senate majority, and may be getting help from Libertarian voters.

Anxieties, however, are growing about the House of Representatives.

As Kyle Kondik at the UVA Center for Politics observes, the House map is shifting as the election draws near. It’s a sentiment shared by Cook Political Report’s David Wasserman and other smart race watchers.

Certainly, House Republicans are taking it seriously, as Speaker Paul Ryan is reportedly dropping scads of cash in tossups in his own home state, and GOP groups shift their focus to key House races.

But what does history tell us?

In the landslide presidential election years of 1980 and 1984, it was a bloodbath for House Democrats as well, losing 34 seats and 16 seats, respectively. The foundations of the 1990s Republican House majorities were sown in these presidential routes.

But so far, this race is not shaping up as a blowout of Reaganite proportions. More instructive may be the lopsided losses of 1988 and 1996. In 1988, even as Michael Dukakis lost 40 states to George H.W. Bush, Democrats actually picked up two House seats. In 1996, the newly-minted Republican House majority lost only 3 seats as Bill Clinton was taking Bob Dole to the cleaners.

Part, or maybe even much, of this disparity may be due to the fact that the electorate has become better sorted over time. In Ronald Reagan’s realigning victories, many conservative Democrats were swept out of districts still represented by Republicans.

What Democrats are hoping for this time is that the Republican brand is so badly damaged that House Republicans in swing suburban districts are made to suffer.

Ask Rep. Mike Coffman, R-Colo., who, in his final debate Thursday with challenger Morgan Carroll, was asked whether Trump “is a sexual predator.” Coffmandemurred. Earlier this week, the suburban Denver Republican had already declared that he would be voting for neither Clinton nor Trump.

And as we look at where the endangered seats are, it is in districts like Coffman’s, in more affluent, suburban areas around majors cities.

It seems unlikely that Democrats could run the table in these toss-up districts and pick off enough Republican-leaning seats to take control.

But control may not be the real objective here. If Democrats are able to even halve the Republican House majority, it would turn the GOP leadership’s job from horrible to nearly impossible.

Given the acrimony and fratricidal froth that would follow a Trump drubbing, woe betide Ryan or any leader trying to keep his or her caucus together.

Democrats may be unwise to be overconfident on the presidential level, but they are in the enviable position of looking to run up the score. And that may be very much at the expense of Republican’s blocking power in Congress in another Clinton administration.

THE RULEBOOK: EGOS IN BALANCE
“The propriety of the thing does not turn upon the supposition of superior wisdom or virtue in the Executive, but upon the supposition that the legislature will not be infallible; that the love of power may sometimes betray it into a disposition to encroach upon the rights of other members of the government; that a spirit of faction may sometimes pervert its deliberations; that impressions of the moment may sometimes hurry it into measures which itself, on maturer reflection, would condemn.”– Alexander Hamilton, Federalist No. 70

TIME OUT: HEXED
New York Post: “Strange clouds forming above the Bermuda Triangle could explain why dozens of ships and planes have mysteriously vanished in the notorious patch of sea. The remarkable new theory suggests the clouds are linked to 170-mph ‘air bombs’ — capable of bringing down planes and ships. Now the riddle could finally be solved after meteorologists speaking to the Science Channel’s ‘What on Earth?’ revealed their findings. Using radar satellite imagery, they discovered bizarre ‘hexagonal’-shaped clouds between 20 and 50 miles wide forming over the dodgy patch of water…The blasts of air are so powerful, they can reach 170 mph — a hurricane-like force easily capable of sinking ships and downing planes.”

HILLARY, TRUMP CHARITY ROAST TURNS UGLY
The Hill: “Donald Trump and Hillary Clinton were seen chatting at the annual Alfred E. Smith dinner in New York City before the two were set to take the stage. The presidential rivals are set to trade jokes during the annual charity event. Clinton and Trump are seated at the same table, one seat apart, at the white-tie fundraiser hosted at the Waldorf Astoria in Manhattan, according to reports and photos from reporters covering the dinner. Clinton also spoke with Melania Trump. According to reports, the two did not speak or acknowledge each other for the first part of the dinner immediately after being seated. Cardinal Timothy Dolan, the Archbishop of New York, is sitting in between them.”

ABEDIN ON HILLARY’S MOROCCO SPEECH: SHE CREATED THIS MESS
Fox News: “Just hours after Hillary Clinton dodged a question at the final presidential debate about charges of ‘pay to play’ at the Clinton Foundation, a new batch of WikiLeaks emails surfaced with stunning charges that the candidate herself was at the center of negotiating a $12 million commitment from King Mohammed VI of Morocco. One of the more remarkable parts of the charge is that the allegation came from Clinton’s loyal aide, Huma Abedin, who described the connection in a January 2015 email exchange with two top advisers to the candidate, John Podesta and Robby Mook. Abedin wrote that ‘this was HRC’s idea’ for her to speak at a meeting of the Clinton Global Initiative in Morocco in May 2015 as an explicit condition for the $12 million commitment from the king. ‘She created this mess and she knows it,’ Abedin wrote to Podesta and Mook.”

New round of Clinton State Dept. emails set to be released today - WashEx: “State Department officials are set to release a second batch of Hillary Clinton’s deleted emails Friday amid renewed controversy over the agency’s handling of Freedom of Information Act requests for the documents. The new batch of emails will be taken from the roughly 15,000 emails recovered by the FBI from Clinton’s server and provided to the State Department. A federal court ordered the State Department to produce at least three batches of Clinton’s deleted emails before Election Day after the agency attempted to delay production beyond November.”

AUDIBLE: SOUNDS IFFY
“If I win.” – Donald Trump at a suburban Columbus rally Thursday talking about whether he’ll accept the outcome of the election.

Trump political director takes a ‘step back’ from campaign - Politico

ANY GIVEN SUNDAY
“Perino & Stirewalt: I’ll Tell You What” gives you all the latest analysis on the 2016 presidential race with William Galston, Josh Kraushaar and Raffi Williams, and loyal hosts Dana Perino and Chris Stirewalt. Watch Sunday at 5 p.m. ET on the Fox News Channel.

FROM THE BLEACHERS
“You seem to have the pulse on political history, so, I’d like to ask the following question.  Has there ever been a less prepared finalist for the presidency than Mr. Trump?  HRC gave him several opportunities to knock her out during the debates and all he could do was respond with a schoolyard rebuttal. I can’t wait for Rubio to take her apart in 2020. Thanks.” – Paul Papadakis, Feeding Hills, Mass.

[Ed. note: Preparation is an interesting thing when it comes to the presidency. Some of the most prepared have been the least successful, while others with thin resumes have seen great successes. Harry Truman comes to mind, as does Abraham Lincoln when it comes to successful presidents without presidential sounding pedigrees. While it is true that the Oval Office is a dangerous place for on-the-job-training, history would suggest that almost any vocation can prepare a person for the presidency, but that not every person is willing to be prepared. What did Lincoln learn as a circuit-riding lawyer or running a flatboat down the river? What did Truman learn as a shirt maker and a doughboy? Life is full of great lessons, but generally lacking in eager pupils.]

“Beyond worrying about the future of the republic, we were introduced to the concept of ‘stud ducks’ in your interview with Megyn Kelly [Wednesday] night. Please elaborate so we will know one when we see it.” – Mary C. Miller, Greenwood, Miss.

[Ed. note: Well, Ms. Miller, I know you have ducks in Greenwood and horses too. That means you know what studs are. I will leave it to you to put together what that means for one happy drake.]

“OK, you aren’t a Trump fan. We get it. But the people making his response to Moderator Wallace’s question the sole topic of discussion post-debate is your (as in the media in general) doing, not Mr. Trump’s. Why would anyone expect that in this election in particular any candidate would abrogate their right to question the results? Suppose Hillary loses the electoral headcount by 537 votes? Should she just take a chill pill and go away?” – Rebecca L. Baisch, Idaho Falls, Idaho

[Ed. note: Ms. Baisch, I should hope that no analyst would let themselves be a “fan” of any candidate. We could hardly tell you what’s happening in an election, or what may happen next, if we have rooting interests in a race. As for Trump’s comments, certainly his campaign and supporters do not want it repeated that he might not abide by the results of the election. But his comments substantially derailed what had been an improved debate performance for him. Saying that one will abide by the will of the voters doesn’t foreclose a candidate’s rights to due process with regard to election results. Had Trump simply said “of course,” it would’ve been a non-issue.]

WHAT’S IN A NAME?
Reykjavik Grapevine: “Not only do Icelandic retailers import ice cubes from abroad; they are also cheaper than ice cubes made in Iceland. As reported, imported ice cubes can be found in a number of stores around the country, some of them touting themselves as ‘premium quality’ ice cubes. RÚV now reports that these imports, which arrive by the tonne, can be up to 40% cheaper than ice cubes made in Iceland. Rannveig Magnúsdóttir, a biologist at the Icelandic Environment Association, described the situation as ‘profoundly flawed’, pointing out that importing ice cubes – apart from being wholly unnecessary – also has a significant impact on climate change, given the fuel required to manufacture and ship the ice cubes.”

AND NOW, A WORD FROM CHARLES…
“[Donald Trump] has not presented any facts. And he is shaking a fundamental principal of our democracy, which is the peaceful transition which requires the open recognition of the legitimacy of an election by the loser.” – Charles Krauthammer on “Special Report with Bret Baier.”