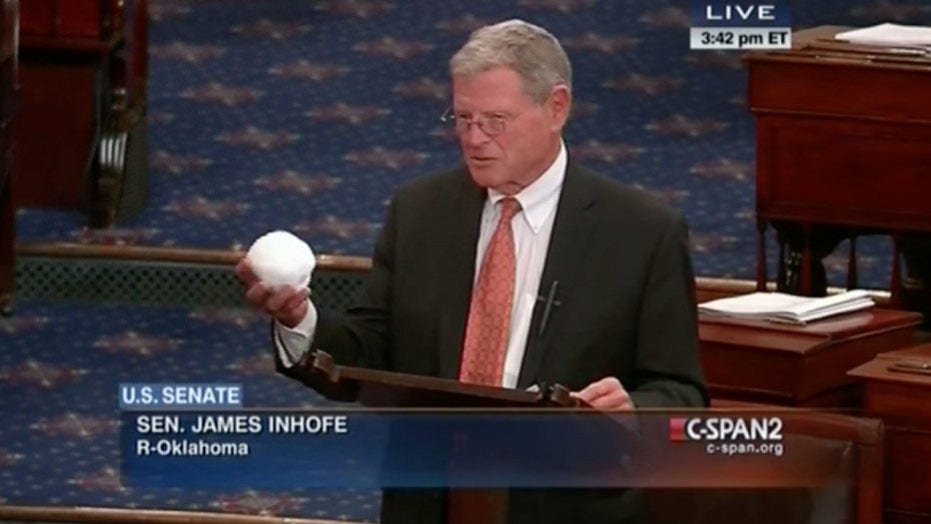 As activists around the world protest for Global Climate Change Week, all timed with the U.N. Climate Action Summit, one GOP senator announced Monday he is giving out "Climate Hypocrite Awards."

Sen. James Inhofe, R-Okla., who once threw a snowball on the Senate floor in an effort to challenge the climate change theory, said he will give out five awards in total, one each day of the week, with Penn State professor and climate activist Michael Mann being the first honored.

"To kick off Global Climate Week, it seems most fitting to first recognize Michael Mann, the architect of the discredited ‘Hockey Stick’ graph who tells people to believe the science but was implicated in manipulating data in Climategate and refuses to provide the data to back up his graph," Inhofe said on his website.

"Climategate" refers to a 2009 scandal in which emails between Mann and other scientists were leaked. They seemingly discussed deleting information and hiding data that did not support the conclusion that climate change is a potentially catastrophic issue.

Mann's famous hockey stick graph shows the correlation between global temperatures and the amount of carbon dioxide – a greenhouse gas that holds in the earth's heat rather than letting it escape into space – in the atmosphere over time. The graph gets its name from the shape created as both temperatures and carbon dioxide rise sharply around the start of the industrial revolution, when humans began using fossil fuels for electricity, transportation and other purposes.

While Inhofe, the author of a 2012 book titled "The Greatest Hoax: How the Global Warming Conspiracy Threatens Your Future," denies human activity is causing potentially catastrophic changes in the earth's climate, the theory has gained wide acceptance, even among some in Inhofe's own party.

"Global Warming is real, humans contribute, and it has real impacts on how the military will operate, both now and into the future," he said in an April release about his plan that leans on the free market to reduce greenhouse gas emissions. "That is why I have introduced the Green Real Deal this Congress."

The 2018 U.N. Climate Change Annual Report predicted a rise in global temperatures by three to five degrees Celcius by 2100 if current trends continue. The report sets a goal of capping the temperature rise to 1.5 degrees Celcius to prevent more drastic impacts but warns the window to accomplish that goal will close by the year 2030.

Mann has defended his hockey stick graph in the past, citing other academics who, he says, have confirmed his data and conclusions.