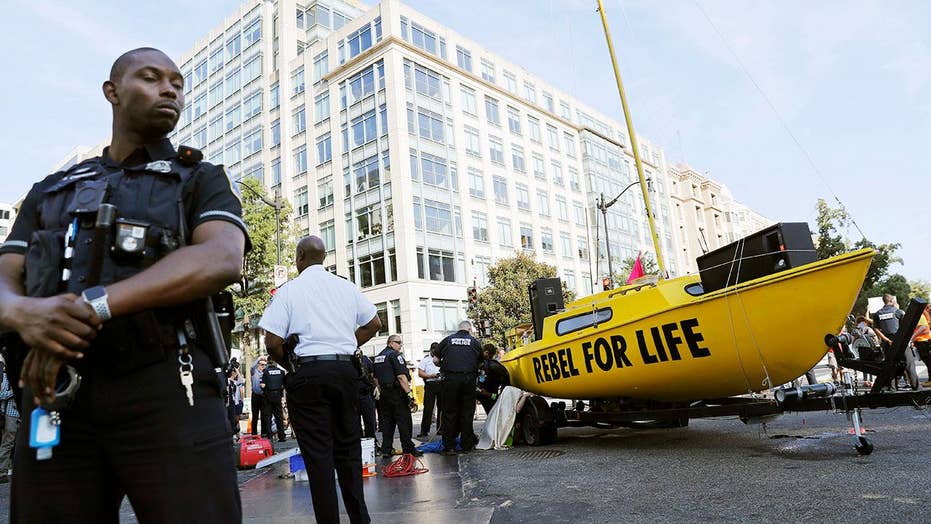 Rep. Jim Banks on Monday said he will introduce legislation requiring disruptive protestors arrested in Washington D.C. to pay for police overtime and other fees in response to climate change activists who blocked rush hour traffic across the city.

The Indiana Republican said anyone convicted of a felony or misdemeanor in connection with a demonstration would be required to reimburse the city for various police costs.

"Washington, D.C. collects over $4 billion in federal funding. Hoosier taxpayers shouldn’t be on the hook for illegal protests — it is a violation of their First Amendment rights," Banks tweeted.

He added that his bill would not apply to protests in which permits are obtained.

"To be clear, my bill will not prohibit other demonstrations or protests on the National Mall like the annual March for Life or Women’s March. Those protests are legal because they obtained official permits. My bill would only apply to illegal protesters who are arrested," he wrote.

Monday's demonstrations occurred ahead of a U.N. climate summit and days after youth-led rallies in more than 150 countries urged policymakers to take a more aggressive approach to combat climate change.

Organizers of the Washington demonstration urged participants to block intersections to bring the "whole city to a gridlocked standstill" and "cause massive disruption for politicians, huge corporations, and the lobbyists who control our government."

"We are in the face of a mass extinction event," Kaela Bamberger, a spokesperson for the event, told Fox News. "Science tells us we are, that the implications of climate change are extremely wide-ranging and would cause mass suffering on a huge scale. The momentary inconvenience experienced by commuters has to be seen alongside the situation that we're in."