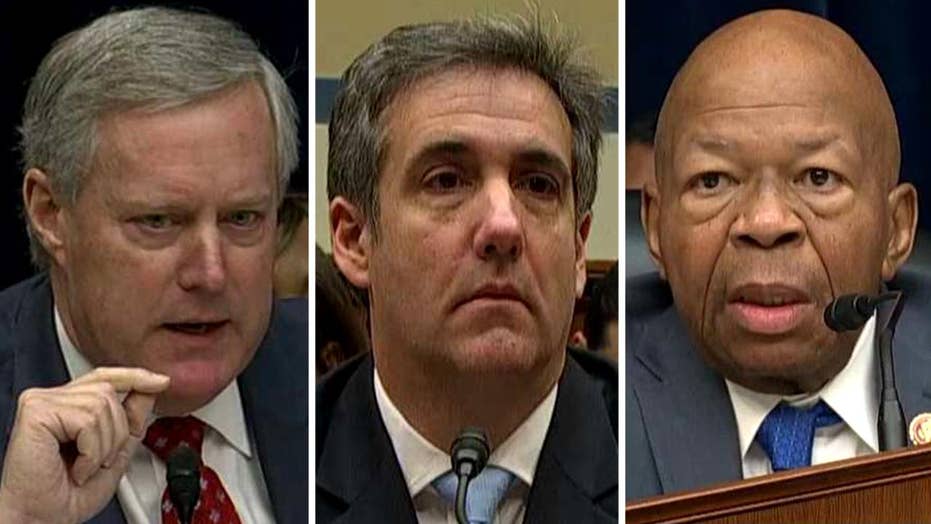 After former Trump attorney Michael Cohen is sworn in before the House Oversight and Reform Committee, Rep. Mark Meadows moves to postpone the hearing because written testimony and evidence was not received 24 hours in advance.

“I just entered a referral for criminal investigation of Michael Cohen, who violated the Foreign Agents Registration Act (FARA) by illegally lobbying on behalf of foreign entities without registering,” Meadows tweeted Wednesday during Cohen’s public hearing before the House Oversight Committee.

“Cohen talks about ‘blind loyalty.’ His real blind loyalty? It’s to the almighty dollar,” he said.

During Cohen’s hearing, Meadows, R-N.C., blasted Cohen for not listing his “foreign contracts” on a "Truth and Testimony" form he was required to fill out prior to his hearing, and called it a “criminal offense.”

“This is just one more example of you skirting the truth,” Meadows said to Cohen.

Cohen explained that he reviewed the form with his legal counsel, and interpreted the directions differently, but would amend the document before the end of the day if necessary.

The letter cited information from the U.S. Attorney’s Office in the Southern District of New York (SDNY) -- where Cohen had been under criminal investigation--which outlined “a substantial amount of consulting business for himself throughout 2017 by marketing to corporations what he claimed to be unique insights about and access" to Donald Trump.

The letter stated that AT&T paid Cohen $600,000 for insight on how the Trump administration would approach the proposed merger with Time Warner; Novartis paid Cohen $1.2 million for access to the White House on health care policy; BTA Bank paid Cohen a “large sum” under a business agreement; Russian-linked company Columbus Nova paid him $500,000 for advice on sources of “capital” and potential investments; and Korea Aerospace Industries paid $150,000 for “legal consulting” related to a Pentagon contract the company was bidding on.

It is unclear what the next steps in Meadows’ referral will be. A source told Fox News that it is “undated and very vague.”

Meadows, on Wednesday, also blasted Cohen for ignoring the committee rule that "requires witnesses to provide their testimony to Congress 24 hours in advance of a hearing." Cohen provided evidence and his opening statement to the committee late Tuesday night.

Cohen’s testimony before the House Oversight Committee came after he pleaded guilty to lying to Congress as part of Special Counsel Robert Mueller’s investigation into Russian meddling in the 2016 presidential campaign and potential collusion with Trump campaign associates.

Cohen is slated to report to prison in May to serve three years.

Cohen has been under criminal investigation as part of a grand jury probe into his personal business dealings, including bank fraud and his tax business, since April 2018, when the FBI raided his home, office and hotel room to seize a collection of documents as part of the SDNY’s criminal probe.

In August, Cohen pleaded guilty to five counts of tax evasion, one count of making false statements to a financial institution, one count of willfully causing an unlawful corporate contribution, and one count of making an excessive campaign contribution. The excessive contribution concerned a $130,000 payment made to adult film star Stormy Daniels (real name Stephanie Clifford) in the weeks leading up to the 2016 election, in exchange for her silence about an alleged one-time sexual encounter with Trump several years before he became president.