Opponents of the California gas tax hike could help Republicans save their House seats. (AP)

A campaign to repeal California's gas tax hike could be Republicans' golden ticket to save the Golden State -- and the U.S. House -- from a Democratic wave.

House Majority Leader Kevin McCarthy and other top Republicans are putting big money behind an effort get an initiative on the November ballot to repeal the new state gas tax. They hope the effort to rally GOP voters to the polls in opposition to the increase will also help thwart Democrats' efforts to win a handful of Republican-held seats across the state, toward the larger goal of taking the House.

McCarthy, R-Calif., has given $300,000 to the repeal initiative, which consists of the groups Give Voters a Voice and Reject the Gas Tax, according to Ballotpedia. They have collectively raised $2.19 million.

Supporters need 585,407 valid voter signatures to get the repeal question on the November ballot and in mid-April submitted an estimated 900,000 signed petitions for verification.

“This is a wake-up call,” Carl DeMaio, a conservative San Diego radio host who has led the repeal drive, said when helping deliver 15 boxes full of signed petitions to a Southern California government office building.

The gas-tax increase -- along with a vehicle fee -- was approved by the state’s Democrat-controlled legislature and signed into law in April 2017 by Democratic Gov. Jerry Brown to generate roughly $5.2 billion annually to improve state infrastructure.

However, residents appear split on the hike -- which increases the regular-gas state tax by 12 cents a gallon, to nearly 42 cents a gallon. And it imposes an annual fee -- from $25 to $200 -- on vehicles depending upon their value.

Supporters say the money is badly needed to fix the state’s crumbling roads, bridges and other infrastructure.

"This ballot measure would jeopardize public safety by eliminating funding for vital highway, road and bridge safety improvements across California. It's dangerous and must be defeated," said Doug Villars, president of the California Association of Highway Patrolmen, part of a coalition of labor unions, construction contractors and local governments opposing the initiative.

Critics argue that the additional fees are being imposed on residents already dealing with high taxes and rising fuel prices.

The national average price for gas this week is $2.90 -- roughly 55 cents more than at this time last year and the highest in roughly the past four years, according to AAA.

The price increases are attributed to higher oil prices on world markets and the projected demand for gas during the summer vacation season. California had the highest gas prices in the country -- at nearly $3.70 a gallon, AAA showed.

According to the American Petroleum Institute, California has the second-highest total gas taxes in the country, with Pennsylvania claiming the top slot. Rounding out the top five are Washington state, Hawaii and New York.

Jessica Levinson, a professor at Loyola Law School in Los Angeles, points out that California indeed has a “robust” history of ballot initiatives being used to significantly impacting elections.

“It’s an effective way to connect voter issues with candidates,” Levinson, who specializes in ballot initiatives, told Fox News earlier this week. “It games the electoral system in so many ways.”

However, she questions whether rally calls to repeal the gas tax will evoke the visceral response from voters needed to help GOP candidates defeat Democratic candidates in deep-blue California, in part because residents already appear to have accepted the increases as part of the household budget. 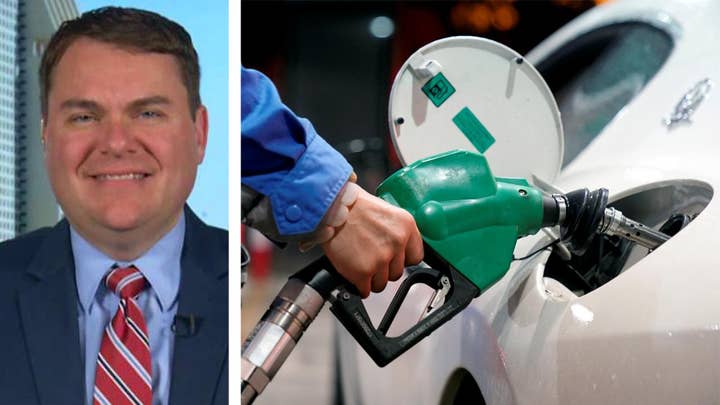 “It might not be enough to get voters out the door and to the polls,” she said Wednesday.

A poll released in February by the nonpartisan Public Policy Institute of California found essentially an even split on the repeal effort – with 47 percent of likely voters supporting repeal and 48 percent in opposition.

Jessica Levinson, a professor at Loyola Law School in Los Angeles, points out that California indeed has a “robust” history of ballot initiatives being used to significantly impacting elections.

“It’s an effective way to connect voter issues with candidates,” Levinson, who specializes in ballot initiatives, told Fox News earlier this week. “It games the electoral system in so many ways.”

Still, she questions whether calls to repeal the gas tax will evoke the type of visceral response that's needed turn out voters and help Republicans defeat Democratic candidates in deep-blue California, in part because residents already appear to have accepted the increases as part of the household budget.

“It might not be enough to get voters out the door and to the polls,” Levinson said Wednesday.

McCarthy’s central California House seat is among the 435 up for reelection this year. His seat is not among the seven being targeted by Democrats. But as the No. 2 House Republican trying to keep the chamber’s GOP majority, he wields considerable clout, and he has a sizeable campaign coffer.

His donation puts him in the top five donors to the repeal campaign, along with the California Republican Party, which gave $400,000; Republican John Cox's gubernatorial campaign; a PAC associated with California GOP Rep. Mimi Walters; and the Kevin Calvert for Congress Committee. The latter three each gave at least $200,000.

Walters is among the seven California House Republicans whom Democrats are trying to oust, toward their goal of winning a total 23 seats to control the chamber.

“Californians are taxed enough, especially at the pump,” Walters said in op-ed this spring. “Infrastructure improvements are critical to the future economic strength of our nation, but higher taxes are not the way to fund them, especially when government waste is so blatant.”

Walters, who is seeking a third House term, is also opposed to increasing the national gas tax and says her opposition to the state-imposed one is in part because some of the money doesn’t go toward infrastructure and transportation upgrades.

Democrats also are focused on four other Republican incumbents in Orange County, where changing demographics in part led to Hillary Clinton beating Donald Trump there in 2016, marking the first time since the Depression era that a Democratic presidential nominee has won the county.

California Republicans also are trying to avoid a situation after the state’s June 5 primary in which they have no candidates for governor or U.S. Senate, as Democrats use anti-Trump sentiment to drive their voters out to the polls. (In California primaries, the top-two finishers advance to the general election, regardless of political party affiliation).

If the repeal initiative qualifies for the November ballot and gets the majority of votes, any future gas taxes passed by the legislature would also require voter approval.