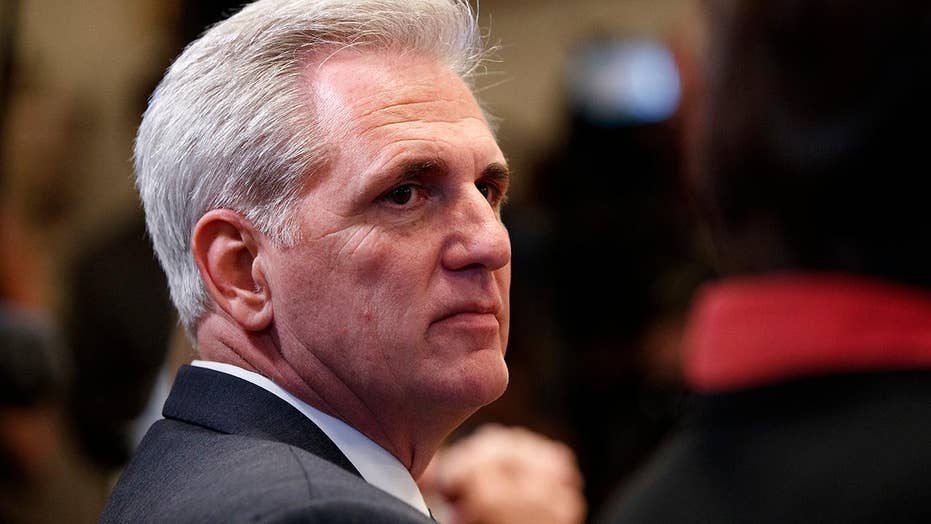 Republicans contemplate new speaker as the party struggles to unite before the midterms; Peter Doocy reports from Capitol Hill.

Lawmakers buzzed around them as the House prepared to vote on a controversial farm bill and food assistance measure. Ryan, R-Wis., and McCarthy, R-Calif., cupped their hands over their mouths like a pitcher and a catcher discussing the signs during a visit to the mound after a cross-up.

House GOP leaders and members certainly got their signals crossed Friday on the farm bill. It was unclear for days whether Republicans could unilaterally pass the measure without help from the other side. All Democrats and some Republicans balked at the bill due to a provision to bolster work requirements for able-bodied persons to receive food aid.

Peterson said the GOP plan would produce “a lot of red tape and hassle” for those down on their luck to qualify for food assistance. And he suggested Republicans were trying to make the process so onerous that those in need “will quit and give up.”

The work requirement provision proved pivotal. No Democrats would support the bill. But the Republican leadership was confident that the work mandate alone would secure the votes of skeptical Republicans.

Meadows argued that the immigration debate “was coming” thanks to the push by the moderates and his group. And he said Republican leaders would be wise to address immigration right away -- especially in connection with the farm bill, perhaps the only “must-pass” measure hitting the floor between now and September.

Ryan was suddenly hearing it in stereo as an alloy of moderate and conservative Republicans threatened to incinerate the farm bill on the floor unless the GOP leadership responded on immigration.

He dismissed the fusion of immigration and farm policy when asked about it by Fox News at his weekly press conference.

“They are unrelated and I wouldn’t describe that as accurate. They’re trying to tie one to the other,” Ryan said.

Like it or not, that is the new political reality on immigration among House Republicans. That’s why the leadership offered the Freedom Caucus a chance to consider the conservative immigration plan in late June in exchange for support of the farm bill.

There was still no deal.

“There are not enough votes to pass the farm bill,” Meadows told Fox colleague Anne Ball.

And so what would Ryan be willing to do to coax just enough Republicans to support the farm bill?

“I’m not going to negotiate in the media,” he replied. “We’re having good productive conversations with our members to advance our agenda on all fronts.”

But apparently, not productive enough.

There was chatter Thursday that Republican leaders could yank the farm bill off the schedule if they lacked the votes for passage. But it became clear that the GOP would forge ahead, rolling the dice.

“It’s going to be tight,” predicted one knowledgeable GOP source about the fate of the vote.

House Majority Whip Steve Scalise, R-La., is often emphatic in his predictions prior to big roll call votes. He sometimes declares “we have the votes” or replies “yes” when asked if a measure will pass. But Scalise was far from unequivocal as a mob of reporters followed him to the floor before the farm bill vote.

“We have a narrow path,” he said. “These are the bills that are always the toughest to pass.”

Scalise is right. The last farm bill melted down on the floor in epic fashion in 2013. An effort to override President George W. Bush’s veto of the 2008 farm bill imploded over an embarrassing clerical error. Scalise’s vagueness meant one thing: No one really knew if the bill would pass.

House Republicans should have had the farm bill in the bag a few days ago. Rep. Virginia Foxx, R-N.C.,  and a coalition influential Republicans pushed an amendment to modify the federal sugar program by subjecting the commodity to market forces.

Ironically, many viewed the sugar amendment as a “poison pill” for the farm bill as it appeared to cleave the GOP conference.

“The sugar amendment comes up every time,” Foxx noted. “The last time it failed by only seven votes.”

“I’m working really hard to defeat it,” House Agriculture Committee Chairman Mike Conaway, R-Texas, said on Fox News Radio. “If we’re not able to defeat it, then it calls into question whether I can pass the bill.”

When the sugar amendment hit the floor Thursday, it wasn’t even close. The House voted 278-137 to reject the sugar modification proposal. Foxx conceded she thought the amendment would pass and certainly not experience a 141 vote beat down.

In retrospect, it may have been better for the Republican leadership had the House approved the sugar amendment. Under those circumstances, Conaway and GOP leaders could have blamed the sugar amendment for the farm bill’s failure -- or at least given them a reason to snatch the measure off the floor.

But the touchstone issue wasn’t sugar. It was immigration.

Rep. Doug Collins, R-Ga.,  the vice chairman of the House Republican Conference, emerged from an elevator en route to the House dais to chair the final debate and vote on the farm bill. Collins sits on an elite roster of members the leadership taps to preside when controversial bills hit the floor. He told Fox News that GOP leaders gave him no guidance to pull the bill from the floor.

“I just assumed that the way they were behaving that they had the votes,” Peterson said.

The scrum broke up as the leaders then scurried about the chamber talking to other lawmakers. Nobody appeared panicked. They also seemed resigned to their fate. Ryan extracted an iPhone from his pocket and pecked out a message. No one recalls Ryan using an electronic device in public since he became speaker and stalked the halls with an iPod, listening to tracks from Led Zeppelin.

The current House membership stands at 428 members: 235 Republicans and 193 Democrats. That means it takes 215 yeas to pass a bill if everyone votes. It also means the GOP can lose only 20 members and still prevail.

But on the amendment votes, the high-water mark for lawmakers voting was 411. So, 206 was the magic number for passage. When the vote on the farm bill started, the number of GOP nays quickly hit 21.

“This isn’t over,” said Scalise as he made his way to a U.S. Capitol Police SUV parked under the House carriage entrance amid a midday cloudburst.

Would the GOP have been better off had they not written a bill geared to garner only Republican support?

“This was about food stamps,” said Peterson after the vote. “If they will listen to me, I can deliver a lot of Democrats to vote for it.”

Peterson said the GOP wouldn’t even talk to him about his proposals. And he said that until Friday, he and Conaway, the Agriculture committee chairman, hadn’t spoken in five weeks.

Peterson knows something about courting moderate Democrats to vote for GOP proposals. He represents a rural district in western Minnesota that favors Republicans by 12 points. President Trump carried the district by 31 points.

“I decided to stick my neck out,” Peterson said.

In other words, if he thinks the bill is so extreme even he can’t support it … .

Moreover, by not pulling the bill, dozens of vulnerable Republicans are now on the record, documented, as voting for the work requirement. Democrats could have a field day in campaign commercials this fall weaponizing the farm bill vote against GOPers who voted yes.

Lots of lawmakers wonder whether Republican leaders would have been in this quandary if Ryan wasn’t departing. The insurrection by two wings of the House GOP Conference reflects restlessness among the rank-and-file.

So far, Ryan hasn’t quashed that rebellion. Same with McCarthy and Scalise. This calls into question whether there is a leadership vacuum, spurred by Ryan’s retirement announcement.

The failure of the farm bill and revolt over immigration may reflect a lack of political capital available to GOP leaders. The brass elected to push ahead with the farm bill vote amid omens they shouldn’t have. This was a political cross-up. A miscommunication between battery mates. Calling for a change-up and firing an Aroldis Chapman fastball instead.

This doesn’t portend well for other big topics. Funding the government. The future of a higher education bill. Actually addressing immigration. Revamping the farm bill.

The leadership isn’t on the same page as the members. They need to get the signs down. If this isn’t corrected, the next pitch will skip wildly behind the catcher and roll all the way to the backstop.