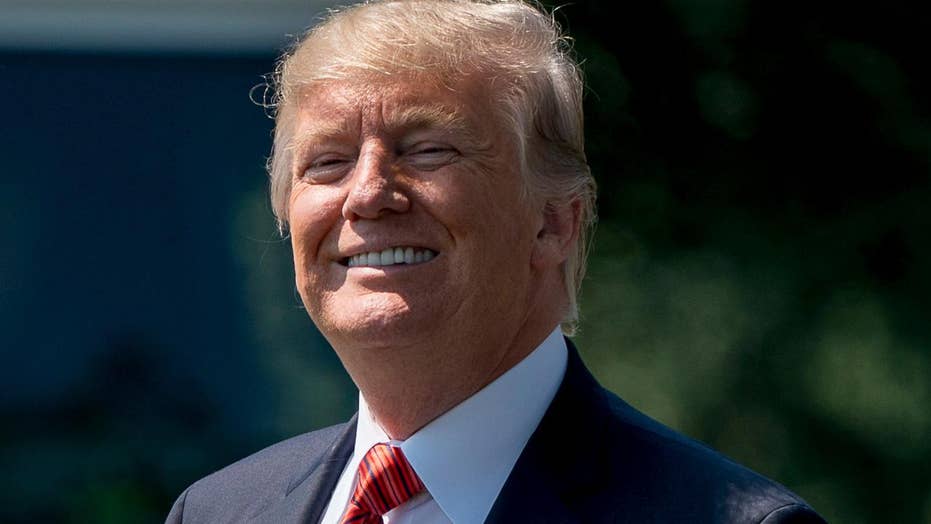 Will President Trump use Phoenix rally to help unite nation?

GOP HOPES FOR NO 2018 TALK AT PHOENIX RALLY
WaPo: “As [Donald Trump] prepares for a rally in Phoenix on Tuesday, some expect him to expand on his support for [Kelli Ward] and searing criticism of [Jeff Flake] — and perhaps even make a formal endorsement. That possibility has unnerved Republicans inside and outside the White House. Some worry about straining the president’s already tenuous relations with congressional Republicans at a time when they face several key challenges this fall… Others looking ahead to next year’s midterm elections think Trump may even be putting the Senate GOP majority at risk. … At a minimum, they think he is needlessly creating a costly primary that will suck resources away from other targets on a map ripe for gains. ‘There are 10 Senate Democrats up for reelection in states the President won in 2016, and that’s where his political focus and energy ought to be over the next 14 months, instead of harmful intraparty warfare,’ said Brian Walsh, a former communications director for the National Republican Senatorial Committee.”

[What to know about the president’s rally tonight - NYT]

Former Romney aide to run against Warren - Mass Live: “Beth Lindstrom, whose resume includes top posts under former Gov. Mitt Romney and former US Sen. Scott Brown, is launch[ed] her US Senate campaign on Monday. Lindstrom joins a field of GOP candidates hoping to take on Elizabeth Warren, the Cambridge Democrat who is up for re-election in 2018. In an online video posted Monday, Lindstrom called herself an ‘independent-minded Republican who believes we can get things done if people would just get to work instead of trading insults or thinking about the next step on the political ladder.’ A Groton resident, she worked as director of the Massachusetts Office of Consumer Affairs and Business Regulation while Romney served as governor. She was also Scott Brown's US Senate campaign manager in the 2010 special election.”

Perlmutter will run for re-election to Congress - Denver Post: “U.S. Rep. Ed Perlmutter has found the ‘fire in the belly’ again — or at least the desire to remain a member of Congress. The Arvada Democrat on Monday said he would run for a seventh term in Colorado’s 7th Congressional District, a declaration that comes five short weeks after Perlmutter dropped out of Colorado’s crowded race for governor and said he was done with politics. … The turnabout, which comes after Perlmutter was facing pressure of late to run for re-election, scrambles a race that was developing into a pitched battle to succeed him and included several of the state’s Democratic rising stars.”

THE RULEBOOK: SAFETY FIRST
“Safety from external danger is the most powerful director of national conduct. Even the ardent love of liberty will, after a time, give way to its dictates.” – Alexander Hamilton, Federalist No. 8

TIME OUT: CHEERIO, BEN
LAT: “During its 150-year history, the bell known as Big Ben has remained a faithful part of the ever-changing London landscape… But on Monday, Big Ben rang its bell at noon for the last time until 2021. … The Big Ben bells will go on a four-year hiatus to allow crews to safely operate during the renovation project, primarily aimed at maintaining the Elizabeth Tower and ‘safeguard it for future generations.’ … The project is estimated to cost about $37 million. It started earlier this year with scaffolding. Crews then plan to renovate the very top of the tower, refurbishing the iron roofing, and work their way down the building. During the four years, renovation work will also take place on the Great Clock, which controls the timing of the bongs that hit Big Ben’s bells, one reason that the bells will be silenced.”

SCOREBOARD
Trump net job-approval rating: -16.6 points
Change from one week ago: up 2.4 points

FIRST STEPS OF TAX REFORM PLAN TAKE FORM
Politico: “President Donald Trump’s top aides and congressional leaders have made significant strides in shaping a tax overhaul, moving far beyond the six-paragraph framework pushed out in July… There is broad consensus, according to five sources familiar with the behind-the-scenes talks, on some of the best ways to pay for cutting both the individual and corporate tax rates. The options include capping the mortgage interest deduction for homeowners; scrapping people's ability to deduct state and local taxes; and eliminating businesses' ability to deduct interest, while also phasing in so-called full expensing for small businesses that allows them to immediately deduct investments like new equipment or facilities. Whether this early level of agreement can translate into an actual tax plan that can pass both the House and Senate remains an open question… Some stakeholders say the signs of progress are a relief, even if a deal is far from done.”

Trump aides propose immigration deal - McClatchy: “Donald Trump’s top aides are pushing him to protect young people brought into the country illegally as children — and then use the issue as a bargaining chip for a larger immigration deal — despite the president’s campaign vow to deport so-called Dreamers. The White House officials want Trump to strike an ambitious deal with Congress that offers Dreamers protection in exchange for legislation that pays for a border wall and more detention facilities, curbs legal immigration and implements E-verify, an online system that allows businesses to check immigration status, according to a half-dozen people familiar with situation, most involved with the negotiations. The group includes … Reince Priebus and John Kelly … Ivanka Trump, and her husband, Jared Kushner … Vice President Mike Pence … National Security Adviser H.R. McMaster and Gary Cohn…”

DEMS QUESTION PEREZ’S LEADERSHIP
Fox News: “The Democratic National Committee just posted its worst July fundraising numbers in a decade, raising questions about why the party machine cannot capitalize on President Trump’s low approval ratings and whether new Chairman Tom Perez is up to the task. The DNC raised $3.8 million last month, compared to $10.2 million for the Republican National Committee. The tally fit a pattern for the Democrats, who have posted a string of depressed fundraising numbers month after month this year, even after new party boss Perez took charge in February. Perez, after the small haul was announced last week, attributed the disappointing July results to understaffing and too few fundraisers as he tries to rebuild the group in the wake of 2016's damaging controversies. The DNC ... issuing a statement from press secretary Michael Tyler saying the group is ‘still focused on rebuilding’ but confident that ‘our team will raise the resources needed as we head into 2018 and beyond.’”

Perez isn’t entirely to blame however - The Hill: “The Democratic collapse in the Upper Midwest was no Republican tsunami, a one-time fluke disaster from which the party would easily rebuild. Instead, it was a red tide, sweeping a specific kind of white working-class voter away from Democrats and onto GOP shores beginning as early as 2010. … After years of taking those states for granted, ‘the math doesn’t work in these states without winning large swaths of white voters.’ … The Midwestern states that handed Trump the White House flipped against Democrats thanks to a confluence of significant factors working for the GOP: First, white working-class voters hit hard by the recession… Second, minority groups and younger voters who turned out in record numbers for President Barack Obama sat on their hands when it came time to pick his successor.”

NORTHAM LEADS GILLESPIE IN VA. GUBERNATORIAL RACE
WashTimes: “Democrat Ralph Northam has a seven percentage point lead over Republican Ed Gillespie in the Virginia gubernatorial race, according to a new survey that also shows that close to six in ten voters disapprove of President Trump and are unhappy with the federal government. Democrats are hoping that Mr. Trump becomes a drag for Mr. Gillespie, and the Roanoke College Poll, conducted by The Institute for Policy and Opinion Research, found that five percent of voters view the race as a referendum on the president, while 43 percent see it as a contest on the future of Virginia and 45 percent see it as a little of both. The survey shows that among likely voters Mr. Northam, the state’s lieutenant governor, holds a 43 percent to 36 percent edge over Mr. Gillespie, a former adviser to President George W. Bush and ex-chairman of the Republican National Committee. Meanwhile, 17 percent of the respondents remained up for grabs.”

Third Democrat announces run for Wisconsin governor - Milwaukee Journal Sentinel: “State schools superintendent Tony Evers will formally announce his gubernatorial run Wednesday, making him the third Democrat to commit to a bid and the first statewide office holder to challenge GOP Gov. Scott Walker. Evers, who heads the state Department of Public Instruction, will announce his run at a suburban Madison park for children, according to an email sent to supporters Sunday and obtained by the Milwaukee Journal Sentinel.”

Alaska Gov. Walker to run as independent in re-election - Alaska Dispatch News: “Alaska Gov. Bill Walker and Lt. Gov. Byron Mallott filed Monday to run an independent campaign for re-election, ending months of speculation about what they were planning for November 2018. The two will seek re-election next year without the endorsement of a political party, according to paperwork they filed at the Alaska Division of Elections' Juneau office Monday morning. … Walker is a longtime Republican and Mallott a longtime Democrat.”

AUDIBLE: BOOM BOOM POW
“You must have been blinded by #eclipse2017 to not see the ‘guns’!” – South Carolina Sen. Lindsey Graham in response to Nebraska Sen. Ben Sasse, who teased him about his ‘upper arms,’ on Twitter.