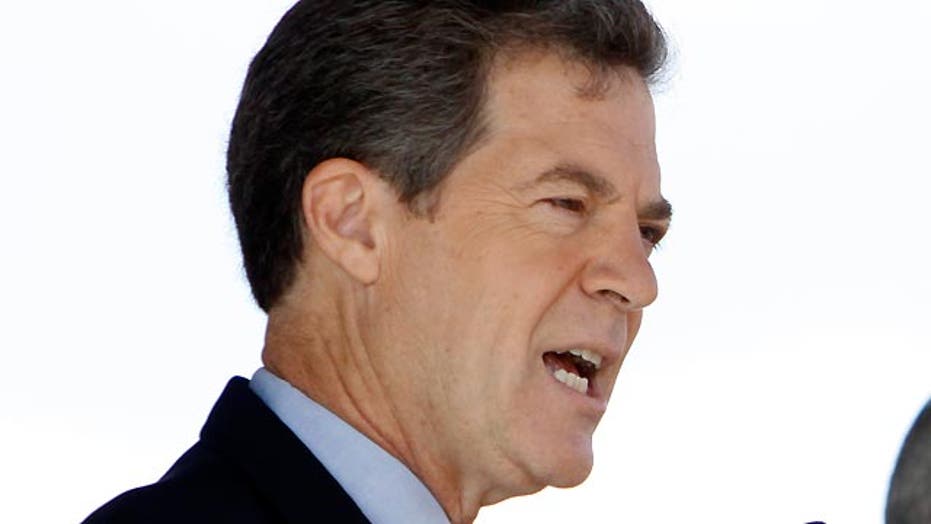 An anti-incumbent mood is threatening powerful Republicans in traditionally conservative Kansas this year, and not even Sam Brownback -- who represented the state in Congress for 16 years and now serves as governor -- is safe.

Lately, the state's tumultuous Senate race, where GOP Sen. Pat Roberts faces a tough challenge from an independent candidate, has attracted national attention. But Brownback's bid for a second term is equally tenuous.

"Voters in Kansas are just frustrated and they're in a strongly anti-incumbent mood," said Chapman Rackaway, a political science professor at Fort Hays State University in Kansas. "The fact that Kansas is a red state means most of our incumbents are Republicans, and the anti-incumbent sentiment is going to go against them."

Rackaway said some of Brownback's political woes are due to a rift in the GOP in the state. In July, several moderate conservatives threw their support behind Davis. Rackaway said while he doesn't think it will tear a large number of Republican votes from the Brownback campaign, "it certainly didn't help."

Brownback pushed a tax overhaul in 2012, which included a 25 percent reduction in the top income tax rate. It also lowered the state sales tax and eliminated a tax on small business income. It was a move the governor hoped would stimulate the economy. But critics say the cuts have hurt the state budget and led to a recent Standard & Poor's credit rating downgrade from AA+ to AA. The credit rating report cited an imbalance between revenues and spending in the state budget.

"Certainly the governor's very aggressive move to mimic Texas' tax structure has caused some controversy, because the revenue numbers have not only been estimated down but even failed to meet estimates throughout the summer," Rackaway said.

Brownback campaign spokesman John Milburn said while the numbers are down, it's to be expected.

"We said all along when the tax cuts were enacted that there would be some declines in revenues. That's what happens when you tax less, you collect less," said Milburn, adding that they're starting to see some positive growth.

Brownback, though, isn't the only candidate on defense right now.

While the governor defends the tax program, his Democratic opponent is busy explaining a more sensational issue -- an incident at a strip club in 1998.

Davis at the time was found at "Secrets" in Coffeyville, Kan., during a police raid. He was then a single 26-year-old lawyer and, according to a report obtained by Politico and other outlets, was found with a stripper in a back room in a "compromising position." Davis said the club was a client of the law firm he worked at, and the raid happened well before he entered state politics. In an email to the Wichita Eagle newspaper, Chris Pumpelly, spokesman for the Davis campaign, said the strip club story was orchestrated by a Brownback aide as part of a "smear campaign" on Davis, and said the Brownback campaign had used taxpayer resources to dig up the old police report.

According to the Wichita Eagle, a state official who works in Brownback's administration made the initial police report request just a few days before a small local paper requested the report and published it. Milburn told the Wichita Eagle the state official who sought the police report was allowed by state law to perform campaign work and did not illegally use taxpayer money.

Davis gave a statement to Politico about the bust saying, "When I was 26 years old, I was taken to a club by my boss -- the club owner was one of our legal clients. While we were in the building, the police showed up. I was never accused of having done anything wrong, but rather I was in the wrong place at the wrong time."

The Davis campaign did not respond to a request for comment from Fox News.

A large number of independent voters are putting their support behind Davis, hurting Brownback's lead. However, the late campaign strip club news could help throw independents back to the governor's campaign.

"Issues of character and judgment are things [independents] latch on to," said Rackaway, adding he believes Kansans will see the campaigns turn more personal as Election Day gets closer.

While the gubernatorial candidates are entering a heated last few weeks of the race, the other Republican having trouble in the usually deep-red state is long-time Sen. Pat Roberts. He's in a surprisingly close race against independent Greg Orman who has not said publicly if he would caucus with Democrats or Republicans were he to win.

Orman's bid became instantly competitive after Democrat Chad Taylor took himself out of the race.