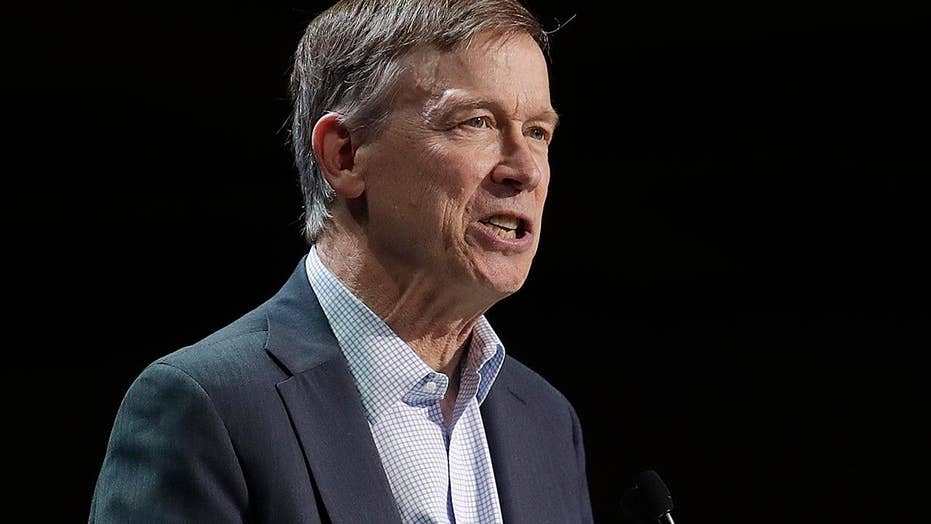 John Hickenlooper gets booed in California for denouncing socialism

Mandy Gunasekara and Kelly Hyman weigh in on the Democratic Party's movement to the far left.

John Hickenlooper, who served as Colorado’s governor from 2011 until earlier this year, made the comment at the NALEO forum in Miami, during a candidates forum sponsored by the Spanish-language TV network Telemundo.

Hickenlooper was asked what message he would have for those living in the U.S. illegally, the Washington Free Beacon reported.

“What I would say with the 11 million people that are here now,” Hickenlooper said, “[is] that we should give them a 10-year visa immediately, put them on a pathway to citizenship and make sure that if it takes longer they can have extensions."

During his response, Hickenlooper also referred to a 2014 interview in the Wall Street Journal, for which he received backlash for suggesting that illegal immigrants didn’t regard U.S. citizenship as a priority.

"What I was trying to say at that time,” Hickenlooper explained Friday, according to the Free Beacon, “was the priority should be allow people to come out from the shadows.”

At the same forum Friday, Hickenlooper also addressed remarks from earlier in the week, in which he criticized the Democratic socialism preached by fellow Democratic candidate Sanders.

Having taken heat over criticizing a fellow Democrat, Hickenlooper instead framed his answer as part of a critique of President Trump.

“President Trump is fueling a national crisis of division in this country that is moving the country backwards,” Hickenlooper said, according to the Hill. “But socialism is not the answer.”

Hickenlooper announced his White House run in March, saying he aimed “to produce the progressive change Washington has failed to deliver.”

Friday’s event in Miami was part of the annual conference of the NALEO Educational Fund, a nonprofit that helps U.S. Latinos participate in the nation’s political process.

The conference for NALEO (National Association of Latino Elected and Appointed Officials) is scheduled to conclude Saturday.