"I apologize for having hired him years ago as an assistant U.S. attorney. I'm very embarrassed about that," Giuliani said during an appearance on Fox News' "The Ingraham Angle."

Giuliani's conversation with host Laura Ingraham took place on the second anniversary of Comey being fired by President Trump -- and on the same night that the former FBI director appeared on a CNN town hall telecast.

PELOSI: TRUMP ‘IS GOADING US TO IMPEACH HIM’

On the CNN program, host Anderson Cooper had asked Comey if he thought Trump will face prosecution when he leaves office, based on findings in Special Counsel Robert Mueller's report on the Russia investigation.

"I think the Justice Department will have to take a serious look at that," Comey responded. "Whether it is a wise thing to do to a former president, I don't know."

Cooper then asked Comey if he believed sufficient evidence of obstruction existed for a legal case against the president.

"It sure looks like it is there, with respect to at least a couple of those episodes of obstruction," Comey responded. 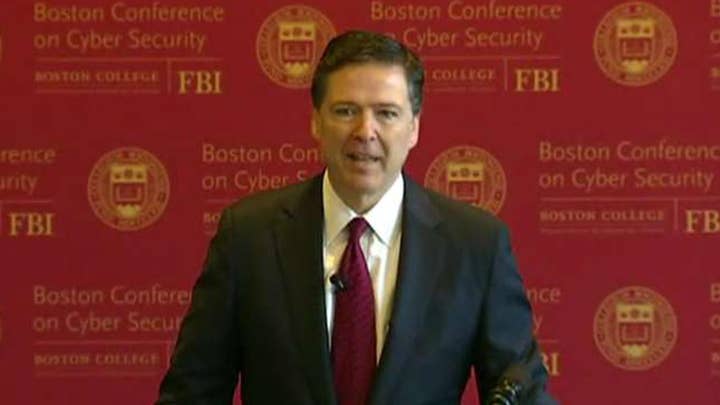 Since Mueller's investigation concluded, Democrats and Republicans have continued to publicly debate whether obstruction-of-justice occurred.

Meanwhile, Comey has continued to make the media rounds to promote his book, "A Higher Loyalty."

On "The Ingraham Angle," Giuliani suggested that Comey's transformation from a top FBI man to a media figure had left him bewildered.

"I don't know what happened to Jim Comey," Giuliani said.

The former mayor of New York City also criticized Comey based on a story in the Hill alleging the FBI knew that elements of the infamous Steele dossier were "inaccurate" before the bureau used the dossier to obtain warrants under the U.S. Foreign Intelligence Surveillance Act (FISA).

"If you can't figure out that the Steele dossier is a piece of junk, then you shouldn't be FBI director. I have no doubt, he's got a serious problem having put his name on that affidavit and not revealed that it was unverified, not revealed that he took no steps to verify it," Giuliani said.

A source told Fox News that Justice Department Inspector General Michael Horowitz is probing how the dossier compiled by former British spy Christopher Steele was used to secure the original surveillance warrant for former Trump aide Carter Page in October 2016, as well as for three renewals.