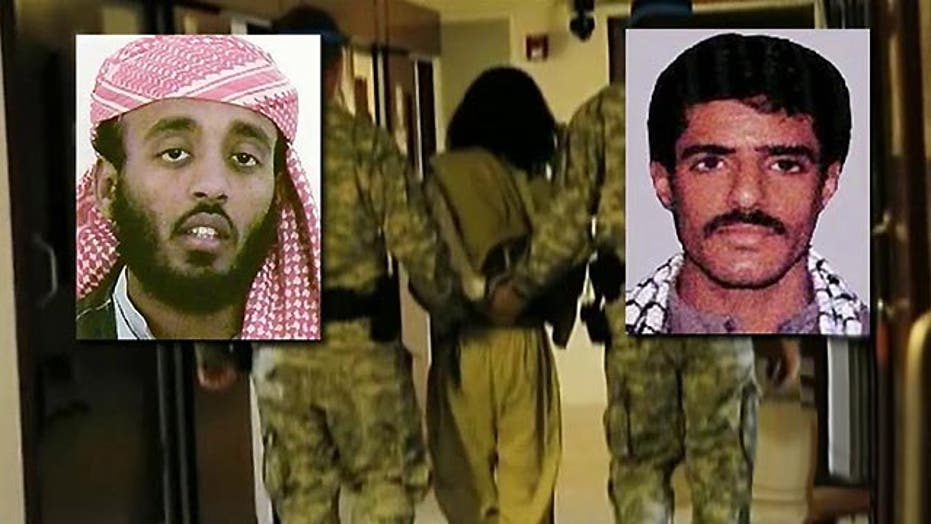 Trial of 9/11 suspects on hold after strange development

GUANTANAMO BAY, Cuba – A 9/11 hearing at the high-security courthouse in Guantanamo Bay came to an abrupt halt Monday morning, just minutes into the session, after two suspects claimed their interpreters worked at so-called CIA black sites -- and said they could not trust them.

The proceedings are now in recess until Wednesday morning over the unusual allegation, which was not publicly disputed by the U.S. government.

The delay came at the start of a hearing focused on whether the case against five Guantanamo prisoners held over their alleged role in the Sept. 11, 2001 terror attacks can go forward.

Defendant Ramzi bin al-Shibh, an alleged member of the Hamburg cell where ringleader Mohammed Atta finalized the plot, said he couldn't trust the interpreter because he recognized him from the CIA secret prisons -- where the 9/11 suspects were subjected to "enhanced interrogation" that critics call torture.

A second alleged 9/11 conspirator, Walid bin Attash, who is accused of training the hijackers, also told the court he had the same problem with his interpreter, claiming he had also worked at the CIA prisons. He went so far as to accuse of the translator of taking part in "torture."

His lawyer Cheryl Bormann, who wears a hijab in deference to her client's religious beliefs, said she had just learned about the conflict minutes before the hearing began.

She said the fact that the translators worked in the CIA secret prisons is one of the "biggest coincidences in the world," or part of a pattern of "infiltration by the government" into the defense teams.

Defense attorneys claimed to Fox News on Sunday that the FBI had tried to insert an informant onto one of the defense teams, and since the men were arraigned in 2012, listening devices were found in attorney/client meeting rooms.

Eight family members of 9/11 victims were in court for the hearing on Monday. Many of them wore around their necks a photo of their relative killed in the attack.

At the proceedings, a military judge is trying to decide whether the attempt to prosecute five prisoners for the Sept. 11 attacks can resume after stalling for nearly a year because of the revelation that the FBI questioned defense team staff.

The hearing is focused on whether more time is needed to explore any potential conflict of interest arising from the apparent FBI investigation, the nature and scope of which has not been publicly disclosed.

The translators in question, one for each defendant, are civilian contractors hired by the government and all must have security clearances.

The five defendants, who include the self-proclaimed mastermind of the Sept. 11 attacks, Khalid Sheikh Mohammed, were arraigned in May 2012 on charges that include terrorism, hijacking and nearly 3,000 counts of murder for their alleged roles planning and providing logistical support for the attack.

Defense attorney James Connell told reporters that the trial is a long way off. "Not only is there no end in sight, there is no middle," he said.