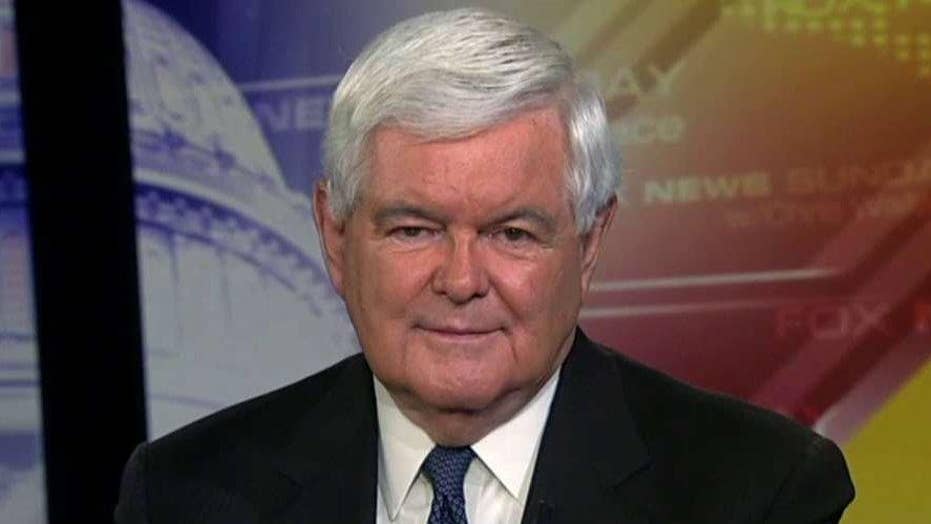 “It was one of the worst mistakes Trump has made. Inexcusable,” the former GOP House speaker, who has become one of Trump’s closest advisers, told “Fox News Sunday.”

Trump has argued that American-born District Judge Gonzalo Curiel, whose parents are from Mexico, is biased against him, considering Trump’s vow to build a wall along the southern U.S. border to keep out Mexicans.

Gingrich, whose is considered a potential Trump running-mate, also called the comment a “mistake” but stopped short of calling it racist.

“That judge is not a Mexican. He’s an American,” he said. “I hope it was sloppiness.”

Still, Gingrich continued to laud Trump, particularly for the first-time candidate's defeat of 16 other major GOP candidates to win the party nomination.

“I’m amazed at his speed, how fast he learns,” Gingrich said. “He’s a remarkable leader. We have a very good relationship.”

However, he argued the billionaire businessman is at a “turning point” in which he must become more disciplined and take more of his campaign advisers’ advice if he wants to defeat Democratic presidential front-runner Hillary Clinton in the general election.

Trump University is the target of two lawsuits in San Diego and one in New York that accuse the business of fleecing students with unfulfilled promises to teach secrets of success in real estate.

Trump has maintained that customers were overwhelmingly satisfied. His legal team has not sought to have Curiel removed.

Trump on Sunday again defended his comments about the judge and dismissed Clinton’s assertion that his remarks are “racist.”

“I have been treated very unfairly by this judge,” Trump told CNN’s “State of the Union.”

In an extended back-and-forth exchange with host Jake Tapper, Trump acknowledged that Judge Curiel is indeed from Indiana but argued that he’s “very proud” of his Mexican heritage, to the extent he is a member of a “very pro-Mexico society.”

“I’m building a wall. I’m trying to keep business out of Mexico,” said Trump, suggesting the situation has created a conflict of interest for the judge.

He also suggested Clinton should be “put in jail” for using a private email server while secretary of state and called her a “stiff.”

Trump, who after a series of terror attack also called for a temporary ban on Muslims entering the United States, told CBS' "Face the Nation" that "it’s possible" that a Muslim judge would treat him unfairly.

Clinton on Sunday was again critical of Trump’s comments about the judge, which she called inaccurate and “very vicious.”

She also suggested that the attacks were “typical” of Trump’s strategy of trying to “divert attention” from his problems, in this case “very serious fraud charges” against the real estate school.

“Trump's continuing ethnic slurs and rants against everyone, including a distinguished federal judge, I think makes my point rather conclusively,” Clinton said.

Also on Sunday, a pair of powerful Senate Republicans warned Trump to drop his attacks on the judge.

"We're all behind him now," Senate Majority Leader Mitch McConnell said on NBC's "Meet the Press," adding that it's time for unifying the party, not "settling scores and grudges."

Their remarks solidify the line GOP leaders have drawn in recent days between themselves and Trump, with whom they've made a fragile peace over their sense that almost anyone would be a better president than Clinton.

The most-recent GOP pushback against Trump comes two days before presidential primaries in California, home to more Latinos than whites.