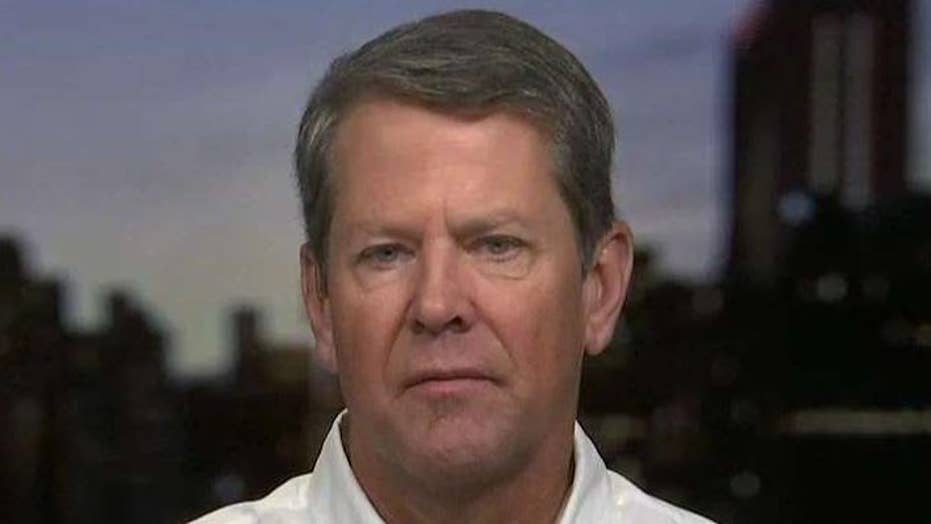 Who is Andrew Cuomo? Here are 4 facts about New York's governor

Find out 4 facts about Andrew Cuomo, governor of New York, including his political background and coronavirus involvement.

Georgia Gov. Brian Kemp said Wednesday that he had just learned this week that the coronavirus can be contagious before people are showing symptoms, citing that fact as part of the reason why he ordered a more strict shelter-in-place order for his state after previously balking on doing so -- yet the White House had said so as early as Jan. 31.

"I think as the reason I'm taking these actions it's like I've continued to tell people I'm following the data, I'm following the advice of Dr. Toomey," Kemp told reporters Wednesday, referencing Dr. Kathleen Toomey, the commissioner of the Georgia Department of Public Health. "Her and I both mentioned in our remarks, you know, finding out that this virus is now transmitting before people see signs so what we've been telling people from directives from the CDC for weeks now that if you start feeling bad, stay home -- those individuals could have been infecting people before they even felt bad."

Kemp, a Republican, continued: "But we didn't know that until the last 24 hours and as Dr. Toomey told me, she goes, 'this is a game-changer for us.'"

Kemp had also said during his press conference, however, that he was referring to updated CDC guidelines that indicated asymptomatic transmission was more severe than previously thought.

"As you know, over the past 48 hours, the modeling and data has dramatically changed for Georgia and many other states around the country," Kemp said. "The CDC has announced that individuals can be infected and begin to spread coronavirus earlier than previously thought even if they have no symptoms."

The new CDC guidelines, which were released March 30, indicate that "studies have documented SARS-CoV-2 infection in patients who never develop symptoms (asymptomatic) and in patients not yet symptomatic (pre-symptomatic)."

But Dr. Anthony Fauci, the director of the National Institute of Allergy and Infectious Diseases and one of the most recognizable faces of the White House coronavirus response, made clear that asymptomatic transmission was a problem in January.

"You know that, in the beginning, we were not sure if there were asymptomatic infection, which would make it a much broader outbreak than what we’re seeing," Fauci said. "Now we know for sure that there are."

Kemp extended closures of all public K-12 schools this week.

The Georgia Department of Public Health released a statement on Thursday that seemed to address and attempt to justify Kemp's Wednesday comments, which have been widely panned online, with one outlet suggesting he's either "lying or incompetent."

"For weeks it has been known that people who were positive for COVID-19 but did not have symptoms likely were able to transmit the virus," the release said. "However, on March 30, Centers for Disease Control and Prevention (CDC) Director Robert Redfield, M.D., confirmed that new data indicates that as many as 25% of individuals infected with COVID-19 remain asymptomatic. Additionally, science also now informs us that individuals who are symptomatic, are infectious up to 48 hours before symptoms appear."

On Wednesday, just three hours before Kemp's press conference, the CDC shared information that seemed to further confirm what Fauci had said in January -- that the coronavirus can be contagious in people who do not have symptoms.

"New @CDCMMWR report on #COVID19 in Singapore shows that some clusters of cases likely resulted from people without symptoms spreading illness," the agency tweeted. "Social distancing and avoiding crowds are key to slowing the spread of COVID-19."