Republican Senate nominee in Georgia Herschel Walker denies a claim that he paid for a girlfriend’s abortion 13 years ago.

"It is a flat-out lie, and now you know how important this seat is," the former college and professional football star said on Fox News’s "Hannity" on Monday night.

Walker’s denial came a couple of hours after a report that Walker in 2009 urged an unnamed former girlfriend to get an abortion after she became pregnant while they were dating, and that he reimbursed her $700 for the procedure. The report from The Daily Beast cited interviews with a woman who said she had a bank receipt showing Walker’s alleged payment, and a "get well" card that he reportedly sent her.

The report said the woman provided proof of her intimate relationship with Walker, and that they corroborated details in the woman’s story with a close friend who said she took care of her in days following the alleged abortion. Fox News has not verified the reporting.

ONLY ON FOX NEWS DIGITAL: WALKER HIGHLIGHTS HIS INDEPENDENCE FROM TRUMP

Walker, who is challenging first-term Democratic Sen. Raphael Warnock in a race that is one of a handful across the country that will likely determine if the GOP wins back the Senate majority in November’s midterm elections, noted on "Hannity" that "this seat is very important."

Additionally, he charged that "they’ll do anything to win the seat, lie, because they want to make it about everything else except for the true problems that we have in this country is, there’s inflation, the border wide open, crime, they don’t want to talk about that."

Walker, who is a vocal opponent of abortion and supports a proposed 15-week federal ban against the procedure, said in a written statement on Monday night that he planned on Tuesday to sue The Daily Beast for defamation.

Soon after report, one of Walker’s adult children went on social media to criticize his father.

"I know my mom and I would really appreciate if my father Herschel Walker stopped lying and making a mockery of us," Christian Walker tweeted. "You’re not a ‘family man’ when you left us to bang a bunch of women, threatened to kill us, and had us move over 6 times in 6 months running from your violence."

"I don’t care about someone who has a bad past and takes accountability," the younger Walker wrote in a second tweet. "But how DARE YOU LIE and act as though you’re some ‘moral, Christian, upright man.’ You’ve lived a life of DESTROYING other peoples lives. How dare you."

Christian Walker’s mother, Cindy Grossman, was married to Herschel Walker for nearly 20 years, and has described physical abuse she suffered at the hands of Walker. Her recollections of violence and abuse have been highlighted in TV ads by pro-Democratic outside groups that blast Walker.

Minutes after Christian Walker’s tweets, Herschel Walker responded on Twitter that "I LOVE my son no matter what."

Warnock, when asked about The Daily Beast report, reiterated to the Atlanta Journal-Constitution his stance on abortion.

"I’ll let the pundits decide how they think it will impact the race," Warnock said. "But I have been consistent in my view that a patient’s room is too narrow and cramped for space for a woman and the government. My view on that has not changed."

Democratic Sen. Raphael Warnock of Georgia greets supporters as he arrives at a Korean senior center in Norcross, Georgia, on Sept. 27, 2022 (Fox News)

National Republican Senatorial Committee spokesperson Chris Hartline said in a statement that the story is a "nonsense" distraction from issues like high inflation and a surge of migrants at the border."

"Democrats are losing in Georgia and are on the verge of losing the majority, so they and their media allies are doing what they always do — attack Republicans with innuendo and lies," Hartline argued. "Democrats and the media have tried to stir up nonsense about what has or hasn’t happened in Herschel Walker’s past because they want to distract from what’s happening in the present."

The Senate Leadership Fund, the top super PAC that is aligned with longtime Senate GOP leader Mitch McConnell, said nothing has changed when it comes to its support of Walker. The group has committed to spending $37 million to run ads backing Walker and blasting Warnock in Georgia.

"We are full speed ahead in Georgia. This election is about the future of the country — Herschel Walker will make things better, Raphael Warnock is making it worse. Anything else is a distraction," Senate Leadership Fund CEO Steven Law said in a statement.

Walker, who won a Heisman Trophy and helped steer the University of Georgia to a college football national championship four decades ago, jumped into the GOP race to face off against Warnock during the summer of 2021 after months of support and encouragement to run for the Senate by former President Trump, his longtime friend.

Thanks to his legendary status among many in Georgia and his immense, favorable, name recognition in the Peach State, Walker instantly became the overwhelming front-runner for the GOP Senate nomination and basically ignored the field of lesser-known primary rivals, declining to take part in debates as he focused his campaign on Warnock.

Walker ended up trouncing his rivals in the May primary, but he quickly came under fire as the general election got underway. 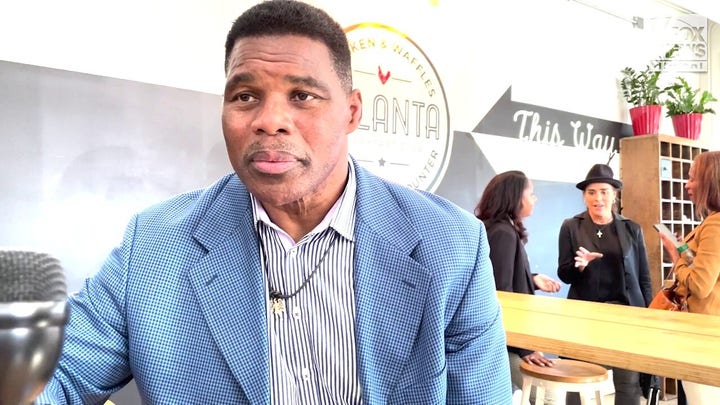 Warnock has dramatically out raised Walker to date, and the senator’s re-election campaign and allied Democratic groups spent tens of millions to target the GOP nominee over what they call his "bizarre or false statements." A TV ad by Warnock’s campaign that launched over the summer highlighted past comments by Walker saying that he had a "dry mist" that would "kill any COVID on your body."

Walker has also taken incoming fire over numerous reports that he overinflated the success of his businesses and academic record, and has been playing defense regarding a number of personal controversies — from the allegations of past abuse and threats against his first wife, to acknowledging children he fathered out of wedlock that he had not previously publicly mentioned despite for decades criticizing absent fathers.

However, the race between Warnock and Walker remains tight, with an average of the latest public opinion polls indicating Warnock with an edge of less than a point over his GOP challenger.