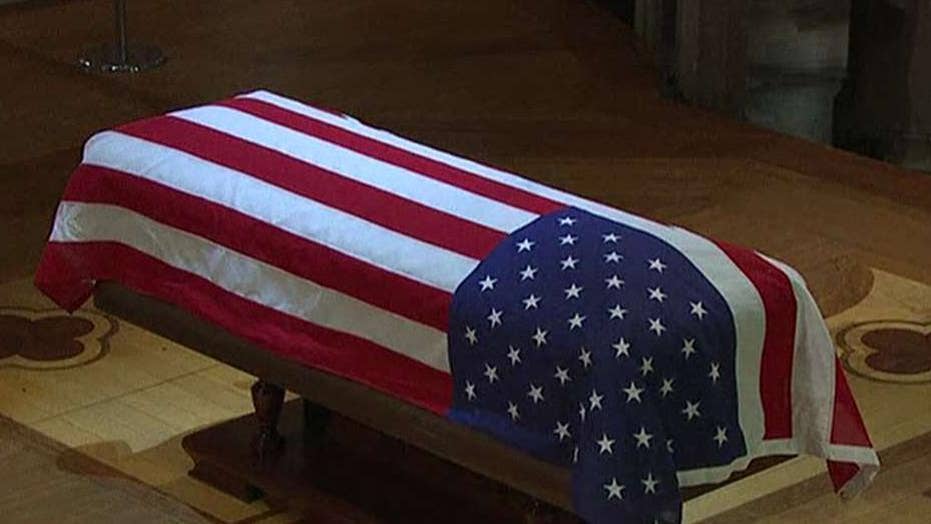 The late President George H.W. Bush was known for his affinity for handwritten letters. But it wasn’t until after his death that his correspondence with a young boy in the Philippines came to light.

Bush had to be cautious in his letters as Timothy’s safety could have been compromised if anyone nefarious found out he was corresponding with a former U.S. president, Stafford told the newspaper. He said he helped screen the letters between the pair.

But Bush would sometimes break “our little security rules,” Stafford recalled. In one letter to Timothy, Bush attached a picture of his dog Sadie, saying she “has met a lot of famous people.”

Former President George H.W. Bush shared a photo of his dog Sadie with Timothy, despite having to be cautious as to not give away his real identity.  (Compassion International)

“And I thought, ‘OK, that’s cute, but boy, that’s starting to slip some little secrets in there,’” Stafford said.

Bush also once wrote, “We’re going to have Christmas this year with my son at his house. Oh, and he lives in a big, white house,” according to Stafford.

“And I’m like, ‘Come on, Mr. President, you are really pushing the envelope here,’” Stafford recalled.

Former President George H.W. Bush told Timothy in 2003 that the current president was traveling to the Philippines. "He loves the Philippines, I know that for sure." His son, George W. Bush, was the president then. (Compassion International)

Bush, who led the country from 1989 to 1993, died on Nov. 30 at his home in Texas at the age of 94. About 20 years ago, Bush attended a Christmas concert, at which people encouraged those in the audience to sponsor a child through Compassion International during an intermission.

“To everybody’s surprise, all of a sudden [Bush] raises his hand in the middle of his security entourage and says, ‘I want one!’” Stafford recalled. “And all of these security people were like, ‘Has anybody screened this? Does anybody know if this is OK or not?’”

In his first letter to Timothy in 2002, Bush introduced himself, “I am an old man, 77 years old, but I love kids; and though we have not met I love you already. I live in Texas. I will write you from time to time. Good luck, George Walker.”

“He really threw himself into it,” Stafford said, adding that the former president “did excellent things very quietly, always giving the credit to other people.”

In 2003, Timothy told former President George H.W. Bush that he was parying for his "physical strength." He also told him he liked to play basketball. (Compassion International)

Eventually, as Bush’s health deteriorated, Stafford’s assistant Angie Lathrop took over sponsoring Timothy. In 2010, Lathrop and her husband were able to travel to the Philippines, and Timothy learned just who had been writing to all those years.

HOW GEORGE H.W. BUSH’S FUNERAL COMPARES TO TRADITIONS OF PAST PRESIDENTIAL SERVICES

“Timothy, he was so dumbfounded, he was speechless,” Stafford said. “And he says, ‘Well I knew that he was a kind and encouraging, wonderful man, but I had no idea.’ And I thought, you know, to a child in poverty, it’s amazing enough that anyone would care about them, but it was beyond his wildest imagination and even his ability to comprehend that the president of the United States knew his name.”

Although he couldn't tell Timothy he was a former president, he did give him hints. In one letter, he said he had traveled to 11 states recently. "I go to those States to give speeches and to help various charities," Bush wrote. (Compassion International)

Bush family spokesman Jim McGrath said he “had no idea – ever – that 41 did this,” adding that he was “not the least bit surprised” at the news, however.

Bush was remembered for many selfless acts as the nation mourned his death earlier this year.

Maine paramedic Josh Grzyb recalled working for the Bush family at their Kennebunkport, Maine, home for several summers as part of a small team assisting with medical aid and daily living assistance. When he told the former president he wanted to go to medical school, Bush promised to help in any way he could – including writing him a letter of recommendation.

Grzyb found out he was accepted to the Massachusetts College of Pharmacy and Health Science the day before Bush died.

The late President George H.W. Bush encouraged Timothy to pray daily. He also sent him a calculator for his birthday.  (Compassion International)

“It was truly an honor and inspiration to work for such a humble man with such reverence and respect,” Grzyb told Fox News. “He was a giving, compassionate man, always going out of his way to make a difference, make people laugh no matter how bad he felt.”

The U.S. Secret Service also honored him by sharing photos of a grinning and bald Bush holding an agent’s 2-year-old son in 2013. When Bush found out about his detail’s plans to shave their heads in support of an agent’s young son who had been diagnosed with leukemia, Bush wanted to participate, in “classic 41 manner.”