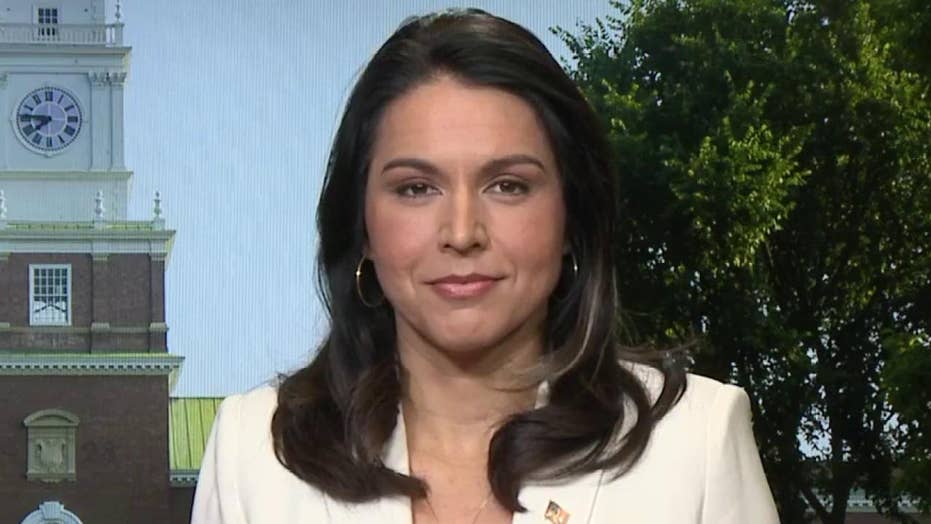 Tulsi Gabbard on Hillary Clinton lawsuit: I will not allow anyone to try to intimate me into silence

2020 Democrat hopeful Rep. Tulsi Gabbard speaks out on 'Fox &amp; Friends' on her $50 million defamation lawsuit against Hillary Clinton for being called a 'Russian asset.'

Democratic presidential candidate Rep. Tulsi Gabbard of Hawaii is accusing former Secretary of State Hillary Clinton of deliberately spreading false accusations that Gabbard is a Russian asset in a lawsuit seeking upwards of $50 million in damages.

During an October 2019 interview with the podcast Campaign HQ With David Plouffe, Clinton suggested the 2020 presidential candidate was "the favorite of the Russians" and "a Russian asset." Gabbard insists these statements have no grounds in reality, and that Clinton knew or should have known this at the time.

"Rather than facts or reliable evidence, Clinton’s basis for the Defamatory Statements was one or both of: (a) her own imagination; or (b) extremely dubious conspiracy theories that any reasonable person (and especially Clinton, a former United States Senator and Secretary of State) would know to be fanciful, wholly unverified, and inherently and objectively unreliable,” said the lawsuit, filed Wednesday in Manhattan federal court.

Clinton did not specifically name Gabbard in her remarks, but strongly implied she was referring to her. The complaint points out that when asked if she was referring to Gabbard, Clinton spokesman Nick Merrill responded, "If the nesting doll fits," a reference to Russian dolls.

Gabbard's complaint states in no uncertain terms that "Tulsi is not a Russian asset," and that neither Russia nor anyone else "controls her or her presidential campaign." To the contrary, it plays up her history of public service, from her time in the Army National Guard to her four terms as a U.S. congresswoman.

Citing her roles on House committees and in the military, the complaint points out that Gabbard "has never had her security clearances challenged or revoked," and claims that Clinton was aware that if Gabbard was really a Russian asset, she would not have been able to serve in these positions which provide her "access to highly sensitive and classified information."

As for why Clinton would make such statements, Gabbard claims Clinton has "a unique, personal connection to Tulsi that animates her hostility towards Tulsi and her presidential campaign.”

The lawsuit claims that this stems from when Gabbard supported Sen. Bernie Sanders, I-Vt., in the 2016 Democratic primary. Gabbard, who was the vice chair of the Democratic National Committee at the time, was the most high-profile member of Congress to support Sanders as he ran against Clinton.

"Clinton was extremely angry—to put it mildly—that Tulsi endorsed Senator Sanders over her," the lawsuit says, citing communications Gabbard claims she received from Clinton's representatives saying that her team "no longer trust[s] [Tulsi's] judgment." Gabbard also alleges that she was told "that the Clinton team would never forget this slight."

The complaint states that "agents" for Clinton let Gabbard know they would not assist Gabbard in her campaigns.

"These agents then forwarded this correspondence to Huma Abedin (Clinton’s closest aide) and John Podesta (chairman of Clinton’s 2016 presidential campaign) to gloat about the beatdown they felt they delivered on Tulsi, writing 'Hammer dropped!'" the complaint says.

"One would expect someone of Mrs. Clinton’s political background to act with a greater level of maturity and dignity, but her personal hostility toward Rep. Gabbard apparently clouded Mrs. Clinton’s reason and blinded her to U.S. defamation laws," Gabbard's attorney Brian Dunne said in a statement.

Gabbard claims that she and her campaign were substantially harmed by Clinton's statements, citing opinion surveys that showed that millions of Americans believed Clinton, including people in key primary states.

The result, the lawsuit says, is that Gabbard has lost potential donors and voters, with damages "estimated to exceed $50 million." In addition to those damages, Gabbard is seeking special and punitive damages "in view of Clinton's malicious and unrepentant conduct." She also seeks litigation costs and an injunction against further publication of the defamatory statements.

Gabbard has hovered in the low single digits in national polls since the start of the 2020 presidential race.