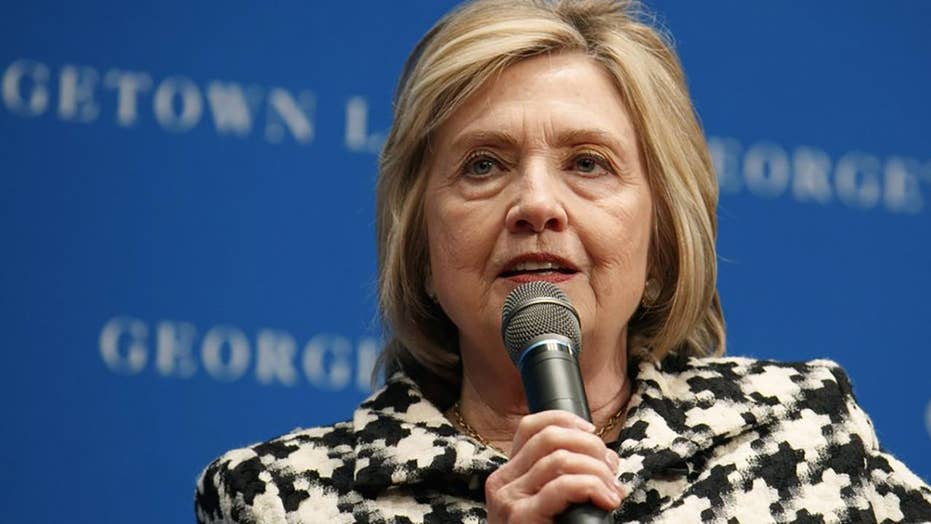 'Hillary' documentary on Clinton's 2016 failure to premiere at Sundance

A new documentary on Hillary Clinton's failed 2016 presidential campaign includes never-before-seen interviews with the family. Comedian Michael Loftus sounds off on why Hollywood can't let go of the loss.

Justice Democrats, a hard-left group aligned with Rep. Alexandria Ocasio-Cortez, released a petition Tuesday pressuring Hillary Clinton to unconditionally support the party's 2020 nominee after she lambasted Sen. Bernie Sanders, I-Vt., one of the top contenders to take on President Trump in November.

The political action committee with a history of supporting progressive and socialist candidates in primary challenges against more moderate Democrats said in the petition that Clinton's comments risked breaking Democratic unity in a fight against President Trump's reelection.

"Hillary Clinton refused to say whether or not she will support Bernie Sanders if he wins the Democratic nomination," the text of the petition says. "That is unacceptable. We all must come together to defeat Donald Trump by supporting whoever the Democratic nominee is."

Justice Democrats have not endorsed a presidential candidate, although they did boost all four members of the "Squad" -- a group of progressive, minority women who have gained notoriety since they were elected in 2018. Squad members Ocasio-Cortez, Rep. Rashida Tlaib, D-Mich., and Rep. Ilhan Omar, D-Minn., have all endorsed Sanders. Rep. Ayanna Pressley, D-Mass., endorsed Sanders' competitor Sen. Elizabeth Warren, D-Mass.

In an interview with The Hollywood Reporter, Clinton said, "I'm not going to go there yet. We're still in a very vigorous primary season," when asked whether or not she would endorse Sanders.

That comment wasn't the only incendiary remark from the former senator, secretary of state and first lady in The Hollywood Reporter's story, either.

"He was in Congress for years," Clinton says in an excerpt from the Hulu documentary "Hillary" printed in the piece. "He had one senator support him. Nobody likes him, nobody wants to work with him, he got nothing done. He was a career politician. It’s all just baloney and I feel so bad that people got sucked into it."

In a press release, Justice Democrats Executive Director Alexandra Rojas implored Clinton to take back her comment in no uncertain terms.

"In our collective fight against Donald Trump, we all have to be ready to support whoever the eventual Democratic nominee for president is," she said. "Defeating Trump is far more important than settling old scores.

"Secretary Clinton’s statement is unacceptable, out-of-touch, and dangerous. We’re calling on her to do the right thing and immediately say that she’ll do everything she can to support whoever becomes the Democratic nominee."