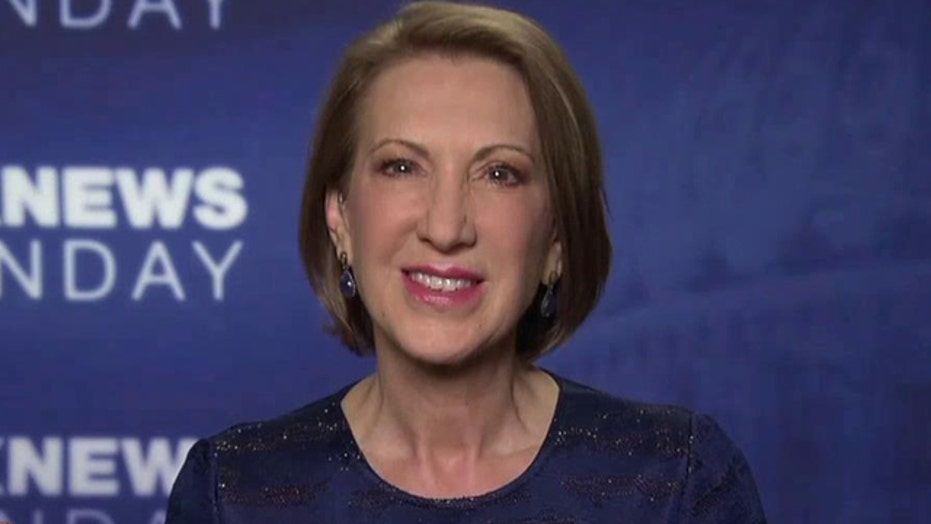 Nearly a dozen GOP and Democratic presidential candidates and hopefuls took to the national stage on Sunday, trying to distinguish themselves on such key issues as education, Wall Street, the future of NSA surveillance programs and stopping the Islamic State.

Nine candidates, in fact, spoke on five different Sunday morning political shows, including former Hewlett-Packard chief executive Carly Fiorina, who continues to argue that her lack of political experience doesn’t disqualify her from being president.

“Politics is different than business,” she told "Fox News Sunday.” “But it's not accurate to say that I don't know anything about politics. I have served as an adviser to many politicians. I run my own political campaign in California. … I chaired the advisory board at the CIA for (then-Director Michael Hayden). … I advised two secretaries of defense, a secretary of state, a secretary of homeland security.”

Fiorina, one of more than a dozen 2016 GOP hopefuls, also held fast on her criticism of Common Core, saying that the “Washington bureaucracy” has unfortunately turned the state-based, educational-standards program into “a nationally driven set of bureaucratic standards.”

Louisiana GOP Gov. Bobby Jindal told ABC’s “This Week” that “ISIS is evil” and that the United States “needs to do everything we can to hunt down (radical Islamic terrorists) and kill them.”

Jindal, who is expected to announce next month whether he’ll seek the 2016 nomination, is polling near the bottom in the GOP field of roughly 14.

He also took a swipe at 2016 GOP candidate and Kentucky Sen. Rand Paul for what he perceives as a soft foreign policy stance.

The No. 2 and No. 3 Democratic candidates on also weighed in Sunday on the talks shows.

Former Maryland Gov. Martin O’Malley, who on Saturday declared his candidacy for the party nomination, continued to stake out his position as a Wall Street reform, while competing with Vermont Independent Sen. Bernie Sanders for the progressive wing of the party, which each hopes to take in the race against frontrunner Hillary Clinton.

“What we need is new leadership … to actually reign in excesses on Wall Street,” O’Malley told ABC. “I am not beholden to Wall Street interests. There are not Wall Street CEOs banging down my door and trying to participate or help my campaign.”

The 52-year-old O’Malley, who has about 1 percent of the primary vote according to most polls, also answered questions about his chances of a longshot victory.

“I've been there before,” he said.

The 73-year-old Sanders told NBC’s “Meet the Press” that he voted against the original, post-9/11 Patriot Act legislation that the Senate will reconsider on Sunday afternoon and that has already voted against reauthorizing it.

“We have to be vigorous in fighting terrorism and protecting the American people but we have to do it in a way that protects the constitutional rights of the American people,” Sanders said. “And I'm very, very worried about the invasion of privacy rights that we are seeing, not only from the (National Security Agency) and the government, but from corporate America, as well. We are losing our privacy rights.  It's a huge issue.”