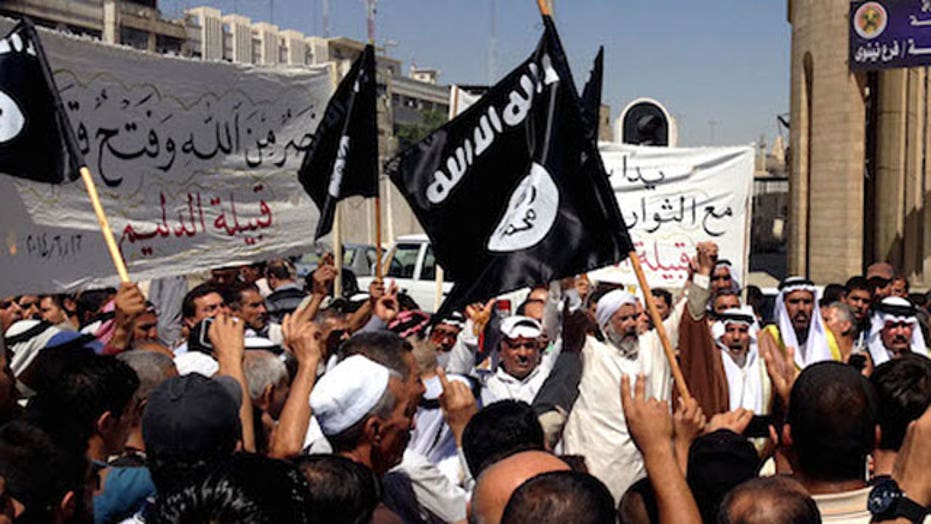 Is an ISIS attack on US soil a real possibility?

America's GI "boots on the ground" in Iraq are so frustrated with the White House message about their mission against the Islamic State -- which Vice President Biden vowed Wednesday to chase "to the gates of Hell" -- that they're wondering how they'll accomplish the goal "when we can't even leave the front gate of our base."

Biden on Wednesday delivered what was probably the toughest statement to date from the administration, declaring, after another U.S. journalist was beheaded by the Islamic State, "we will follow them to the gates of Hell until they are brought to justice."

But his tough talk was at odds with a message delivered earlier in the day by President Obama, who said that while his administration's goal is to "destroy" ISIS -- it also is to "shrink" it to a "manageable problem."

Amid the mixed messages, a source in contact with special operators in Iraq told Fox News that "frustration and confusion reign" among Americans on the ground there.

The source relayed the complaint of an unnamed special operator: "Chase them to the Gates of Hell? How the [f---] are we going to do that when we can't even leave the front gate of our base!?"

Ostensibly, U.S. personnel on the ground in Iraq are there to defend U.S. facilities. The president earlier this week deployed an additional 350 personnel to Baghdad to provide security at the U.S. Embassy and related facilities.

The decision brings the additional U.S. diplomatic security contingent to 820.

Defense officials say that when the additional Marines arrive, they will bring the total number of U.S. troops in Iraq to 1,213.

U.S. military personnel also are engaged in airstrikes against the Islamic State in northern Iraq and helping with humanitarian missions to aid ethnic minorities who have been besieged by the militant group.

But it remains an open question how aggressively the U.S. would expand the fight against ISIS, and whether military in Baghdad would be pulled into that effort.

In a statement earlier this week announcing the additional diplomatic security contingent, the Defense Department said: "The Department of Defense will continue to plan and prepare further military options should they become necessary, and we will remain ready to protect our diplomats, our citizens, and our interests in Iraq, while we continue to work with the Iraqi government to counter the Islamic State of Iraq and the Levant."

A strategy for addressing the Islamic State in Iraq, and perhaps Syria, could become clearer in the coming days as Obama meets with British Prime Minister David Cameron and other European allies at a NATO summit in Wales. Secretary of State John Kerry is also heading to the Middle East to meet with allies there. All efforts are aimed at building a coalition to battle the Islamic State.

But the mixed messages about how far the U.S. is willing to go have sowed confusion on Capitol Hill, as well as in the field.

Reacting to Obama's comment about making ISIS "manageable," he said: "That's when you are closing a lane on the freeway and you have got to go down the freeway with three lanes instead of four, then you manage it. But this is ISIS. They want death and destruction to the United States of America."

Former CIA and NSA director Michael Hayden also told Fox News Radio's "Kilmeade and Friends" on Thursday that "Iraq is not coming back" after this.

He called Iraq a divided country, claiming that a "Shiastan" and "Sunnistan" have effectively been created alongside Kurdistan. Hayden said more U.S. support should go toward the Kurds at this point.